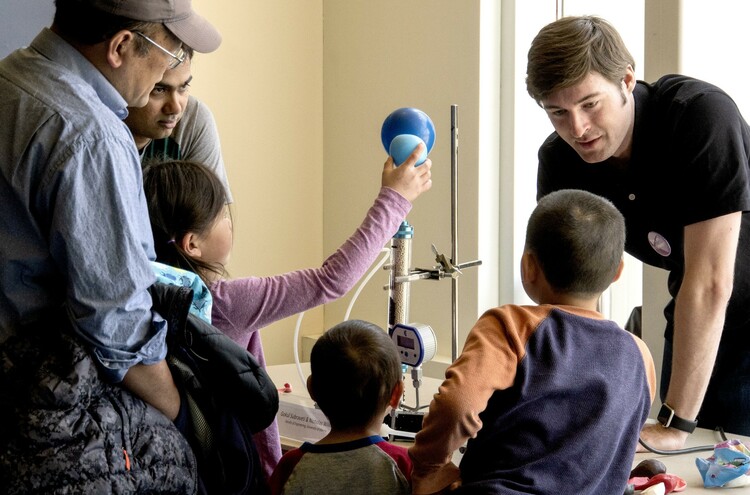 Balloons were the key.

A few cents of plastic might seem irrelevant to advanced energy research, but when Gokul Subraveti and Nicholas Wilkins were reaching out to a public audience, inflating a few colourful orbs made a big difference.

The chemical engineering graduate students had prepared their pressure swing adsorption testing apparatus for a public demonstration at TELUS World of Science Edmonton (TWOSE), but the equipment was lacking colour. Families might be inclined to pass by the stainless steel, plastic, and tubing, not realizing it demonstrated a process for capturing carbon dioxide emissions that could prove more cost effective than current methods.

To ensure that kids and their parents stopped to learn more, TWOSE Staff Scientist Marie McConnell suggested they stick a balloon on it.

“For this demonstration we did not have a CO2 cylinder input and our outflow was not connected to any diagnostic tools,” Gokul explains. “But we were pumping air through the cylinder, so we used the outflow to inflate balloons.”

Those balloons stopped kids in their tracks, giving families who passed through TWOSE on Saturday, May 11, an incentive to learn how pressure swing adsorption technology could cut emissions from current energy production technologies, like natural gas plants.

Nicholas and Gokul were among eighteen graduate students and post-doctoral fellows participating in a Research Showcase as part of the UAlberta Energy Week. Like dozens of other Future Energy Systems research personnel since the program’s launch, they took time out of their lab to made public outreach a priority.

That kind of outreach is already making a difference. 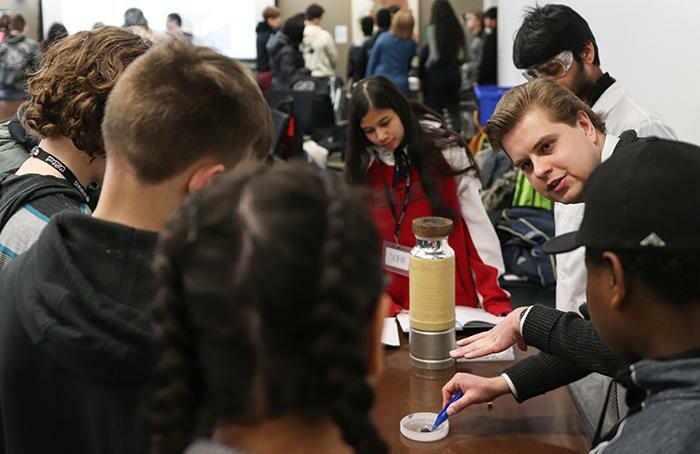 Social media has changed the way many people receive and perceive scientific knowledge. New ideas spread with every Facebook share and retweet, but these ideas are not always –– perhaps not often –– rooted in real research. The research community is finding itself in a race against misinformation, but outrunning fiction spread at the speed of a ‘share’ is not the only option to defeating it. Public outreach can help change audience expectations.

“Many people’s view of science is shaped by what they see on Facebook, or in a tweet or on YouTube,” observes Melania Woloszyn, the Coordinator of the University of Alberta’s U School program. “We think one vaccine against misinformation is exposure to the post-secondary environment.”

The U School program celebrated its tenth anniversary this June, after welcoming more than 700 students from socially vulnerable Alberta schools over the 2018-19 academic year. Each week, classes ranging from grade 4 to grade 9 came to campus for immersive learning experiences, with activities ranging from journaling to tours to lessons from researchers. Future Energy Systems personnel have been active participants.

“Lisa [Stein], Arthur [Mar], and Pierre [Mertiny] and their students did wonderful activities for the kids this year, we were so lucky,” Melania says. “For the kids this is a chance to see what real science looks like, and to picture themselves as potentially being part of it.”

Pulling back the curtain on research also helps students reshape their understanding of science, she adds. “In school, science feels like it’s about getting the right answer –– you get the right answer on the test to get a good mark. But meeting researchers and grad students shows these kids that real science is about imagination, asking questions, and proving ideas wrong more often than proving them right.”

She believes that students benefit from seeing researchers engaging with tough questions, refusing to accept simplistic answers, and being willing to be proven wrong. Experiencing this perspective helps change the context in which misinformation is received.

“It’s pretty easy for anyone to sound convincing in a social media post,” Melania says. “But when you’ve met researchers, seen where they work, and heard them talking about how complicated the world really is, it’s harder to believe a random Facebook post can have the absolute right answer.”

Inoculating students –– and the broader public –– against false certainty and misinformation is a very valuable service that researchers, graduate students, and post-doctoral fellows can provide. Developing the skills to do so can help ensure a rewarding research career. 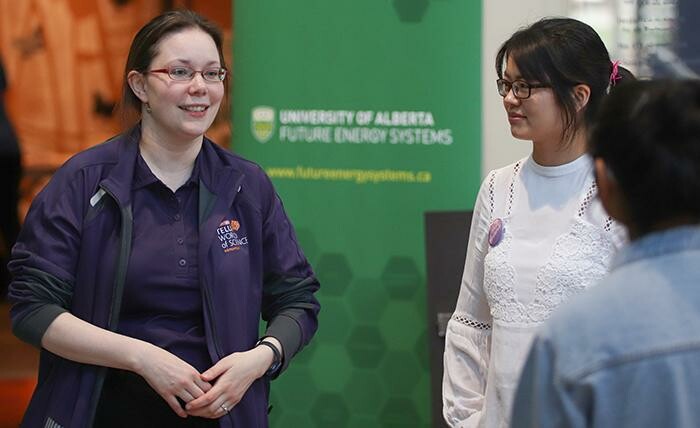 Communicating research to the public is a complex challenge. Researchers need to assess how familiar an audience is with a given topic, how influential outside information (or misinformation) might be, and how much information can be reasonably shared during the interaction.

In many cases, the researcher’s first challenge is simply to attract the attention of people who might otherwise not be interested.

“Especially when working with kids, our first priority is to get them excited about science,” explains Jennifer Bawden, the Science Director at TELUS World of Science Edmonton. “Once we have their attention, we can communicate some pretty basic things to them. We help build a foundation.”

There are numerous techniques for building that foundation, from making sure to crouch down to eye-level with a young child, to asking questions of an audience instead of just telling them what they’re seeing. And, of course, the occasional balloon helps.

Children are not the only audience –– even at a child-focused science centre like TWOSE, parents often bring questions of their own. Fortunately, communication skills are largely transferable.

“Once you know how to talk about your research with kids, it’s not too difficult to figure out the parents,” Jennifer continues. “You ultimately apply the same principles to make sure you’re understood, just for a different audience.”

Employers understand the versatility that comes from experience communicating with children. Machine learning chemist Anton Oliynyk –– one of the founding members of the Future Energy Systems Peers in Research Communication (PIRC) group –– helped lead this year's U School activity hosted by Arthur Mar’s group. This experience with a different kind of communication proved valuable in his recent job search.

“I was applying for a position with a private college in New York City, and to them it was important to see that I had experience communicating not just with colleagues,” he says. “They wanted to see evidence that I had the ability to communicate research to the public. I even provided pictures taken during the U School activity, and spoke about it in my interview.”

His tenure-track position in Manhattan starts in August. 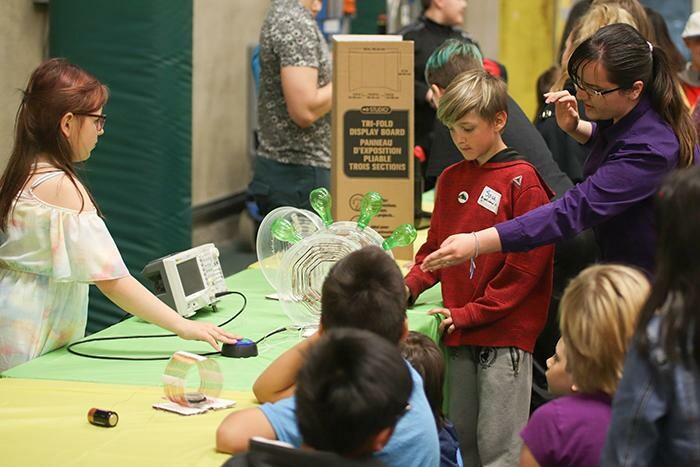 In the leadup to UAlberta Energy Week, Future Energy Systems partnered with TELUS World of Science Edmonton to host a special offering of a short course called Research Zone. Over four weeks, Jennifer Bawden and her TWOSE team trained the eighteen graduate students and post-doctoral fellows in communicating with public audiences, and helped them develop hands-on tabletop activities appropriate for children and parents alike.

“Our program is based on a course out of the United States called Portal to the Public –– we’re the only Canadian institution offering the training,” she explains.

Research Zone runs multiple times throughout the year, and in addition to participating in a research showcase at the end of each course, participants are often asked to return to TWOSE for themed events, and to participate in other outreach activities at the centre and elsewhere.

“Once we know the participants and their activities, we can call on them when we’re showcasing related research,” Jennifer says. “In the meantime, they own the activities they create during the course –– they can be used in many different settings.”

That was the case for the Future Energy Systems participants; many of their activities actually debuted two days before the Energy Week Research Showcase, during the official launch of the Energy Systems signature area. Though no children were present, the event proved that public-facing communication skills equip researchers for interactions with all sorts of audiences: for example, post-doctoral fellow Gloria Okpala was able to use her activity to show President David Turpin how bacteria she studies can help cleanse tailings ponds.

Melania also attended the Energy Systems launch, and after seeing the Research Zone activities she invited new Future Energy Systems research teams to participate in U School’s tenth anniversary celebration on June 4. While hundreds of U School students raced around the Butterdome in potato sacks and plasma cars, dozens paused to learn about energy systems: Susanna Vital de Campos de Freitas and Fabiano Domingos showed them how copper coils could wirelessly transmit power to lightbulbs –– if pointed in the correct direction. Michael Nicol-Seto and Linda Hasanovich taught the fundamentals of Stirling engine gearing and temperature differential expansion and contraction –– by inflating more balloons.

“It’s so helpful to have activities built in consultation with TELUS World of Science, because we know they’ll be good for the kids,” Melania explains. “We hope sharing these activities will be good experience and professional development for the researchers too. I write a lot of recommendation letters!” 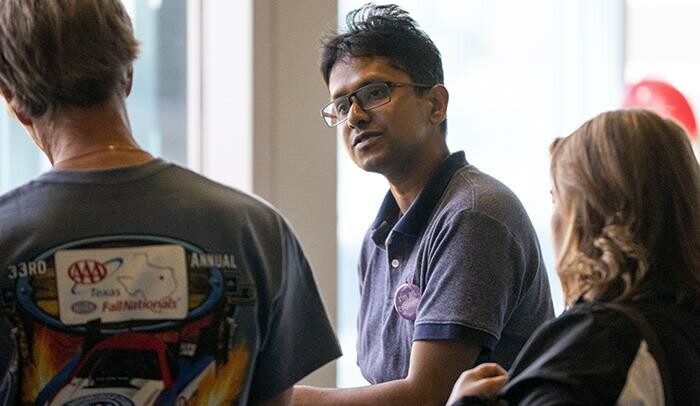 It’s impossible to quantify the benefits of research outreach for those on the receiving side, because experiences can be so variable and unexpected.

During the Energy Week Research Showcase, post-doctoral fellow Dulika Nayanasiri took a break from explaining smart grid technologies to help a young girl’s father map out a solar installation on his ice fishing shack. Information that might have taken weeks to track down online was shared in just a few minutes, potentially making a big difference for one family’s winter recreation.

“We can start to take for granted that [at the U of A] we’re surrounded by people with this knowledge,” Melania says. “Whether you’re a parent just passing by, or a teacher, or a student in a rural school, what we have here can be really helpful –– even change the way they do things.”

Melania reports that some teachers have redesigned major class assignments based on the interdisciplinary nature of research experienced during U School visits. She also points to teachers being better able to flesh out scientific textbook examples because they’ve seen the concepts firsthand during activities with researchers.

But while supporting teachers can lead to benefits for generations of students, directly inspiring students might be the most rewarding aspect of this sort of outreach. With big futures ahead of them and no shortage of imagination, kids can find valuable role models at the University of Alberta.

One U School visitor to Lisa Stein’s lab –– where methane-eating bacteria are being genetically engineered to produce biofuels –– recently journaled about PhD student (and three-minute pitch winner) Marina Lazic: “Marina inspired me very much and she opened my eyes a bit. In the future I want to become a freelance photographer, but if that doesn’t work out then I would like to become a scientist and help to prevent climate change.”

Whether that student becomes a very well-informed photographer, a researcher with a great gift for taking photos, or something else entirely, the interaction with a researcher has clearly served as inspiration.

“I hope to make our world worth saving,” the student wrote.

Balloons might help attract attention, but it’s clearly researchers who make a mark.

TELUS World of Science Edmonton is currently seeking volunteers for guest outreach. If you are a researcher or graduate student interested in sharing your expertise with the public, email fescom@ualberta.ca.