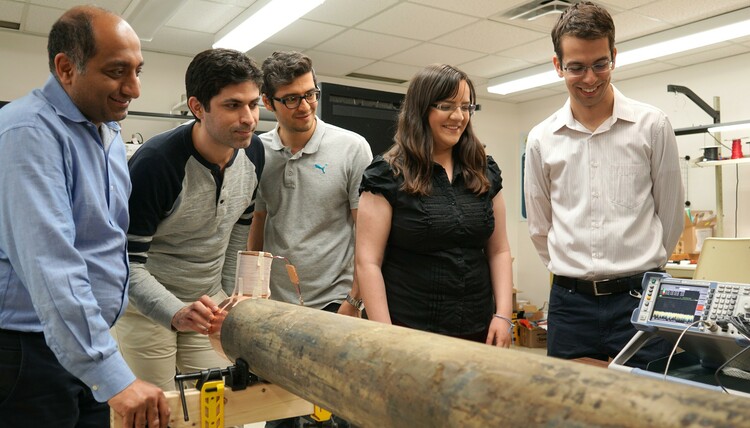 Dr. Pedram Mousavi was among those who tragically perished aboard Ukrainian International Airlines flight PS752 in January 2020. Additional information can be found here. This work continues.

What do you do when your smoke detector beeps?

Those sensor units typically start chirping –– not blaring, as they do in case of a fire –– to let you know their batteries are running low. So you get your step ladder, figure out how to twist the detector off its mount, realize it needs a type of battery you don’t have, and head to the store to buy one. It’s a non-negotiable annoyance: the detector monitors for danger when you’re asleep or away, and you need it to be operational.

University of Alberta engineering Professor Pedram Mousavi leads the Intelligent Wireless Technology group, which is working on new technologies that could preempt the step ladder and the trip to the store. His team’s sensors consume only a tiny amount of energy and can be wirelessly connected to a base station that both supplies power and collects data. These sensors can be stuck almost anywhere, potentially costing as little as $5 each, and using different materials can detect different things –– temperature, humidity, even movement.

The potential uses for these sensors don’t stop in the home. Mousavi has joined Future Energy Systems because these same sensors can help producers in the energy sector see exactly what’s happening in their systems, even in difficult environments.

“If the temperature sensor on a SAGD pipeline kilometres underground used a battery, you would need more than a step ladder to change it,” Mousavi explains with a smile. “Current technology uses cabling for power up, but our Direct Conversion Sensors are wireless, and can help oil sands producers, and many other types of energy producers, monitor their systems more efficiently and effectively.”

But wifi in your house can be disrupted by appliances or ducts; how can a base station and its sensors remain connected when separated by kilometres of dirt and rock? Mousavi’s team has patented a technology that allows the signal to catch a ride on any kind of metal structure –– including the pipeline itself. 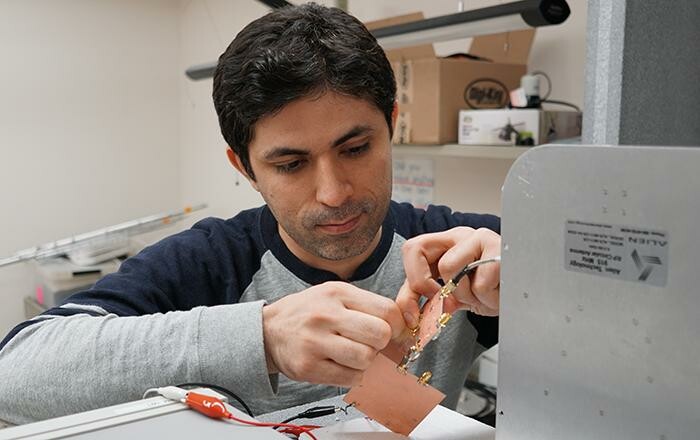 Wireless power is nothing new. Many devices –– from phones to electric toothbrushes –– can charge without plugging in. However, this typically only works at short ranges and depends on the intensity of the device’s energy needs. Batteries prefer to charge slowly and steadily; sensors have different requirements.

Most sensors need energy to function. The principle is simple: find a sensitive material that reacts to a specific condition –– for instance, temperature –– then place it in an environment. The data from this sensor is generated in baseband, an unmodulated frequency that must be up-converted into higher radio frequency, or RF, bands so it can be transmitted using technologies like Bluetooth or wifi. This up-conversion requires RF circuits, which consume power.

As with a smoke detector, all of these steps are often accomplished within a sensor unit’s housing. An internal battery supplies power for detection and, if broadcast is necessary, upconversion to higher RF frequencies. A transceiver chip is required to receive and transmit the data. The trouble is that an onboard battery will eventually run out of power, and a chip adds cost and complexity –– more things that can break down over time.

Research Associate Rashid Mirzavand came to the University of Alberta from Amirkabir University of Technology, and has spent four years with Mousavi’s team working to simplify sensor design to make the devices practical for wireless applications.

“You can reduce the amount of power you need by eliminating the data up-conversion from baseband to the higher RF bands,” he explains. “We accomplish this by using sensors that detect at RF frequencies instead of baseband.”

Sensor data is generated in frequencies that are appropriate for transmission, then composited together using a technique called passive additive mixing. The base station receives a signal it can interpret –– no batteries required. 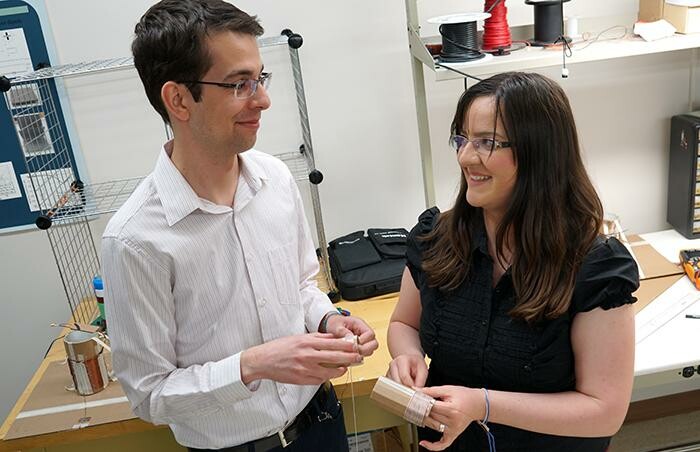 Wireless sensors might work well in a home environment, but when separated from a base station by kilometres of rock and soil, signals need help to travel. The conventional solution might be to run connecting wires down the pipeline, but Mousavi’s group has pioneered a much simpler and more efficient solution: use the metal of the pipeline (or any other metallic structure) as a carrier.

“With our single conductor power transfer, there is no need for a typical electric circuit to send power and the composited RF signal,” explains recent-graduate Susanna Vital de Campos de Freitas.

Along with her husband Fabiano Domingos, Susanna first joined Mousavi’s team while an undergraduate student on exchange from Brazil. The duo then returned to the University of Alberta for their Masters degrees in Electrical Engineering, rejoining the Intelligent Wireless Technology group to continue the technology’s development.

“In a conventional electrical circuit, energy flows in one direction so you need a closed loop,” she continues. “In our system, energy flows in two directions across the same path, because of a standing-wave generated on the metallic structure.”

This single conductor technology was patented by Mousavi’s group in 2017, and allows virtually any metallic structure to become a carrier. It could even be used to transmit power and data across metal shelves in the home, and if the transmission is below 5 watts, anyone who touches the metal with bare hands won’t notice a difference.

“We do recommend that any metal structure transferring a larger amount of power be isolated with a non-conductive layer,” Fabiano cautions. “But in the case of a pipeline to a reservoir, there is no chance of unintended human interaction.”

This means a base station can safely power as many sensors as are required along a single metallic structure –– the number that could be applied to a pipeline is virtually unlimited. Collecting data from a multitude of sensors would also be straightforward.

“Leveraging existing RFID technology, each sensor will have its own 8-bit identification code,” Rashid says. “The base station could query all of them at once, or target specific sensors at specific times to gather particular data, and then sort all of their data as it comes in.”

The result is a system that promises to be significantly less costly and complex than current SAGD sensors, which use optical fibre cables run the length of the pipeline, and are both vulnerable to damage and difficult to repair. 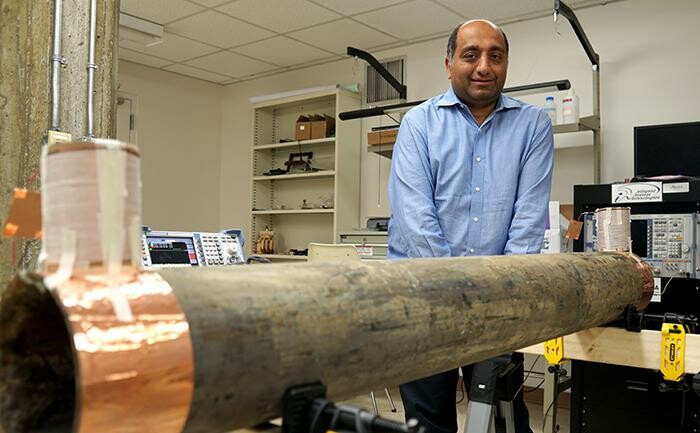 Mousavi’s team is currently partnering with a reservoir company to begin piloting this technology in the real world. Extensive simulation work has already been done to establish that single conductor power transmission can work along a SAGD pipeline, and additional simulations are being run to confirm that the presence of soil, rock, and oil will not disrupt the signal.

Next comes real-world validation: a 1.5-meter section of actual pipeline has been delivered to the team’s lab and is now being tested under a variety of conditions to verify the simulation results.

“Validation allows us to confirm to industry that our technology is viable and reliable,” Mousavi says. “It is important for us to demonstrate that these innovations can lead to a high potential return on investment, as well as improvements to efficiency.”

Providing practical solutions for industry is one of Mousavi’s long-term priorities. Since 2013 he has held the NSERC-AITF Industrial Research Chair in Intelligent Integrated Sensors and Antennas, through which he has partnered with companies in sectors ranging from data management to telecommunications. Oil and gas is a recent addition to that portfolio, and he believes it is an important one.

“We are fortunate to live in a country and a province that has prospered because of energy resources,” he says. “With research into versatile technologies that can help diversify the economy, our team can help ensure that prosperity continues as the world’s energy needs evolve and change.”

Sensors that are as practical on an underground pipeline as they are in your living room are a good start. Someday soon, you can put away the step ladder.

To learn more about the project Wireless Communication and Power Delivery, click here.