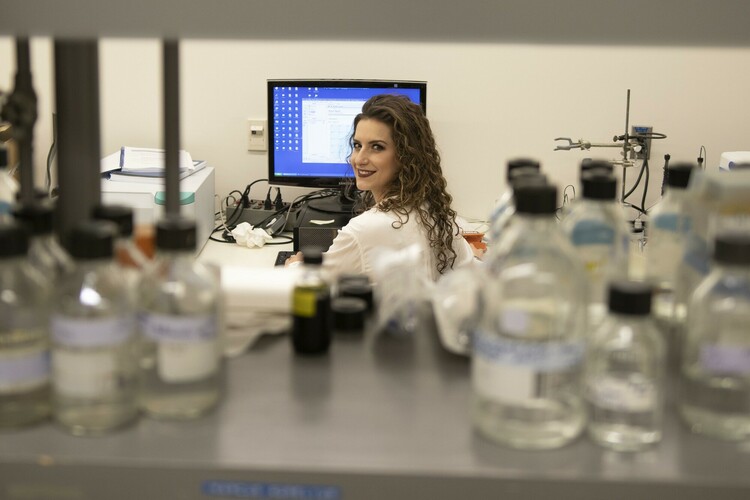 Catherine Tays points to a series of blue tiles on her monitor and explains how each represents a different condition that helps her bacteria eat methane or create jet fuel.

“The bacteria that makes fuel has over 3,800 genes, the one that makes plastic has over 4,500,” she explains. “We need to understand which ones help the bacteria create those products, and how those genes act differently under these different conditions.”

Armed with that knowledge, Catherine’s labmates will be able to genetically engineer strains of naturally-occurring, harmless, methane-eating bacteria –– methanotrophs –– into a workforce that can turn damaging greenhouse gases into fuels or biodegradable plastics.

Catherine has spent the past seven years laying the foundation for this work. She’s grown and sequenced hundreds of thousands of bacteria, collected gigabytes of genetic data, and zeroed in on a few hundred genes in each cell that her successors will need to pay closest attention to.

But in all that time, one of the most important things she’s done is help her supervisors –– Future Energy Systems researchers Dominic Sauvageau and Lisa Stein –– build a bridge between two disciplines that need to come together to make bacteria-produced biofuels a practical reality. When Catherine crosses the stage at her convocation later this year, she’ll be handed a PhD from the University of Alberta’s Department of Chemical and Materials Engineering and its Department of Biological Sciences.

“I know ‘interdisciplinary’ is a trendy word in research right now,” she says. “For any of us in the Sauvageau-Stein group it’s not a trend, it’s the only way to get a viable product.” 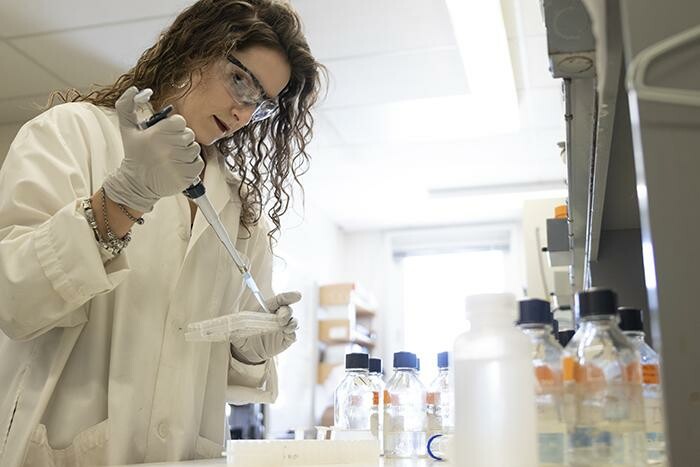 Breaking down barriers between research disciplines wasn’t Catherine’s plan when she began her graduate studies, but when she joined the methanotroph project she realized she didn’t have much choice.

“Lisa and Dominic figured out a long time ago that for this research to get anywhere, their team needed to deeply understand both microbiology and chemical engineering,” she explains.

Unfortunately, those two disciplines don’t always understand each other.

“I know from the outside it might seem like all university researchers are basically the same,” she continues. “But these are two departments in two different faculties –– engineering and science. I can guarantee you that people who grow bacteria every day have different language and routines than people who design reactors.”

For instance, microbiologists are accustomed to a certain level of uncertainty in their subjects. Sometimes bacteria just won’t grow, sometimes they’ll grow abundantly, and the reasons are not always apparent. This doesn’t generally matter in the biological sciences because the objective is to understand what an organism is and why it does what it does –– not to ask it to do something specific, like make jet fuel.

In engineering, the fundamental goal is to be certain a design will achieve its objective before ever building it. Data is collected, simulations are run, and prototypes are modeled in order to minimize any waste of effort and resources when developing new technology. Integrating an occasionally-temperamental living organism into such a meticulous process can be unwelcome.

But the two disciplines are essential partners for the Sauvageau-Stein group’s collaboration.

“Without an engineer’s ability to design a bioreactor where our bacteria create these products, we’ll never be able to produce fuel or plastic at an economically viable scale,” Catherine says. “But without a microbiologists’ ability to understand biological inconsistency, we might not get the bacteria making the products at all.” 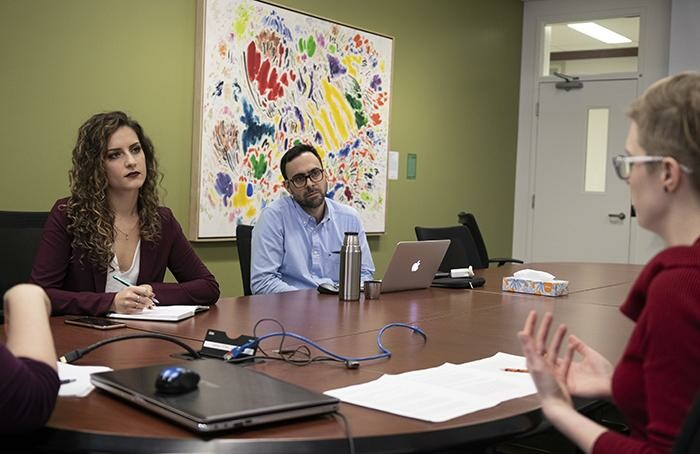 Catherine was uniquely suited to being stuck between two academic worlds: her University of Alberta undergraduate degree is in Biological Science and Psychology, and her father is an electrical engineer.

“In retrospect, I realize I was fortunate to come in understanding the differences,” she says. “Just from talking about my research with my dad, I knew I had to explain things differently to a group of engineers than I would to a group of microbiologists.”

That understanding was crucial as her Masters degree morphed into the PhD from the Departments of Chemical and Materials Engineering and Biological Sciences –– probably the first PhD of its kind in the University of Alberta’s history.

“As far as I know I’m the first person to attempt a PhD from these two departments at once,” she says. “If someone else did it first I really wish they’d left a how-to guide, because a lot of good people in both departments had to spend a ton of time figuring out the administration.”

The administrative challenges were worth it; with one foot planted firmly in each world, Catherine had ample opportunities to hone her communication skills. First she focused on becoming a resource and mentor for her labmates –– fellow graduate students from both science and engineering, some of whom were communicating with people from different disciplines for the first time. Armed with those experiences, and having learned how to make herself understood just as well at an engineering conference as a biology conference, she widened her focus to include public outreach and competitions like 3 Minute Thesis.

“Communicating science is basically solving a puzzle,” she explains. “You figure out who your audience is, what they know, and what they need to know, and you come up with a method to help them understand your research.”

Her experience solving this puzzle recently placed her between even more disciplines within Future Energy Systems: she helped develop and launch the Peers In Research Communication group, dubbed PIRC. Along with like-minded graduate students and junior researchers from across the program, she is now mentoring students and post-doctoral fellows every week, and running special training programs for those who want to improve specific communication skills.

“It’s fun to sit down with someone whose research I know nothing about, and help them figure out how to explain it to me,” she says. “I get to help, and learn a lot at the same time.”

These activities have even bought some benefit back to her lab. One of her colleagues in the founding of PIRC, chemist and machine learning expert Anton Oliynyk, is beginning to collaborate with the Stein-Sauvageau group in an effort to speed the genetic engineering efforts of Catherine’s labmates and successors.

“Talking to people outside your discipline opens up all sorts of opportunities that you might never have foreseen,” she observes. 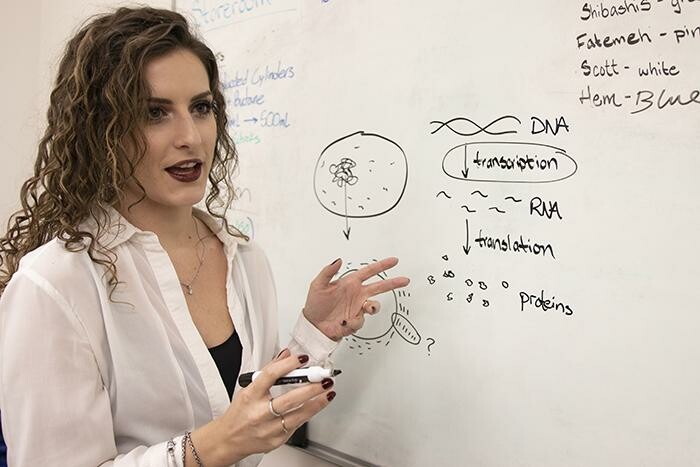 After spending seven years with methanotrophs, Catherine is ready to turn the research over to the next generation of graduate students. She’s confident the bacteria are in good hands, and that appreciable quantities of useful products like biodegradable plastics and jet fuel will be coming soon.

“Advances like machine learning will probably help my labmates accelerate this research in ways I couldn’t have imagined when I started,” she says. “For me, it’s time for a different challenge.”

Many potential paths await after she collects her degree: she could launch a startup to take some of the methanotrophs to market, work in science communications, or consult in the biotech space. All those options would place her in the space between different worlds –– business, research, and the public –– which is part of the appeal.

“I’m extremely grateful for the opportunities I had here, especially working in this group,” she reflects. “I want to use what I’ve learned to make research more accessible to people outside the lab. Hopefully I’ll have the chance to make some kind of difference.”

Given her bridge-building experience it seems likely Catherine will succeed in those plans –– whether or not bacteria are involved. Though as she points out, no one can ever truly escape the tiny bugs.

“Leave bacteria behind, are you kidding?” she laughs. “If you’ve ever washed dishes with a sponge, I have some really bad news for you.”

Without getting into too much gross detail, she recommends squeamish people use a dishwasher, and avoid keeping moist sponges and cloths around for too long.

“Take it from someone who’s been growing bacteria for a living: they love sponges,” she concludes with a smile. “Fortunately, they mostly like us too. There are literally trillions of them on us and in us, every minute of every day.”

Perhaps there are pieces of research knowledge that the rest of the world isn’t quite prepared for, but if Catherine has her way, we’ll all be a little more ready soon.

To learn more about the project Bioconversion of Single-Carbon Effluents into Biofuels and Biofuel Precursors, click here.