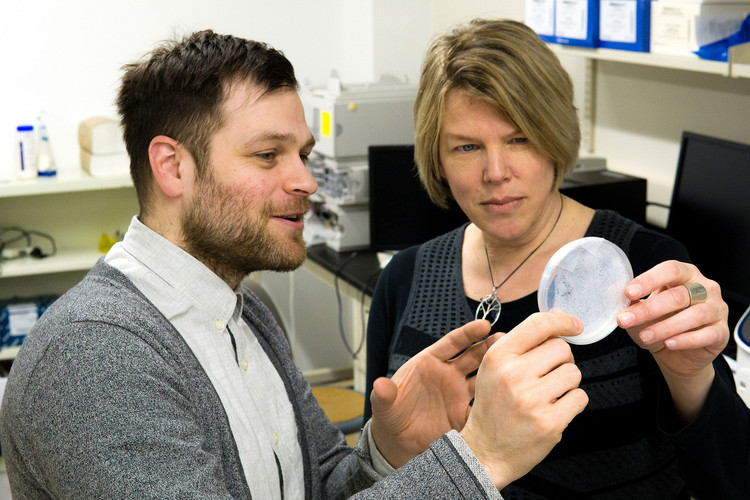 Bacteria can become a workforce that helps redefine our energy sector.

Though these single-celled organisms are often dismissed as health hazards, or cheered for their probiotic benefits, their usefulness as highly specialized microscopic labourers is just beginning to be understood—and the work they do could change how we make our energy.

As part of the Future Energy Systems research initiative, University of Alberta biological sciences researcher Lisa Stein and chemical engineering researcher Dominic Sauvageau are genetically engineering non-hazardous bacteria that consume methane, one of the most potent greenhouse gases, and turn it into fuel.

Methane is a major player in climate change.

“When we call it natural gas and burn it for power, methane does reduce emissions compared to coal,” Sauvageau explains. “But if it gets into the atmosphere without being burned, it actually has a stronger global warming effect than CO2.”

Methane is 25 times more potent than carbon dioxide, so in 2016, Canada, the United States and Mexico committed to reduce their methane emissions by 45 per cent by 2025. Since 44 per cent of Canada’s (and 70 per cent of Alberta’s) methane emissions come from the oil and gas sector, meeting those targets means regulations forcing producers to capture “fugitive” emissions.

“To offset the cost of capturing the methane you could just sell it as natural gas,” Stein suggests. “But you could also find a way—using naturally occurring bacteria—to turn it into a more valuable fuel, or even a product that doesn’t release carbon dioxide at all.”

Scientists have known for decades that bacteria can be modified to convert methane into other products, but no one has managed to fully scale it up.

“In the old days, a biological scientist could stay in her lab modifying bacteria and testing them in isolated conditions,” Stein explains. “But what works in a Petri dish doesn’t necessarily work at industrial scale.”

She likens it to training a worker to produce a certain product, but not worrying about the design of the factory. When millions of these workers come together in a factory that doesn’t have the right layout, equipment or working conditions, they can be forgiven for simply staring at each other in confusion.

“No matter how perfectly suited to the job, a million individuals without organization is usually just a mob,” Sauvageau says.

The trick is to build factories that suit the workers—”reactors” that could range in size from a bathtub to an Olympic-sized swimming pool.

So, as Stein’s lab genetically modifies bacteria, Sauvageau’s team runs experiments to identify the optimal conditions for their work. Variables can include the size of chambers, layout, temperature and nutrients, and once they find an optimal condition, that information is fed back to further customize the bacteria meant to function within it.

“Our team members interact on a daily basis and our teams meet every two weeks,” Stein says. “Constant communication means we can move fast.”

Together, they’re working with Mango Materials––a California bioenergy startup whose other research partners include NASA––to pilot a reactor that captures methane from wastewater treatment and uses bacteria to convert it into bioplastic.

The composition of captured methane varies depending on its source, so Stein and Sauvageau are creating a platform of a half-dozen bacteria genetically engineered to work in different circumstances.

“No single type of bacteria will do every job,” Sauvageau explains. “We’re creating a roster of different bacteria with matching reactors that can be customized to different industrial applications.”

These bacteria will use methane to produce a variety of products. One is butanol, an alcohol fuel that can either run unmodified gasoline car engines or be mixed into diesel fuel to reduce soot emissions. Others include isoprenoids, chemicals that usually come from petroleum, which can be used as biojet fuel.

“By creating these materials from methane, we reduce our need to extract fossil fuels from the ground,” Stein says. “Instead of digging new carbon out of the Earth and expelling it into the atmosphere, we recycle what’s already out here.”

Recycling methane emissions and reducing the need for new extraction sounds promising, but neither Stein nor Sauvageau see it as a silver bullet for climate change.

“Our platform is just one part of what needs to be a system-wide solution,” Sauvageau says. “Eventually our energy infrastructure will change, and we may not rely as much on combustion engines—or hydrocarbon fuels.”

But if our system no longer requires hydrocarbons, would the bacteria find themselves out of a job? Stein doubts it.

“We’re learning a lot about how to work with these bacteria,” she says. “I’m pretty sure we can coax them to make something else.”

Learn more by watching Dominic's Energy Talk, Best of Both Worlds: How Bacteria Can Reduce GHGs And Lead To More Sustainable Energy, hosted by the Edmonton Public Library: