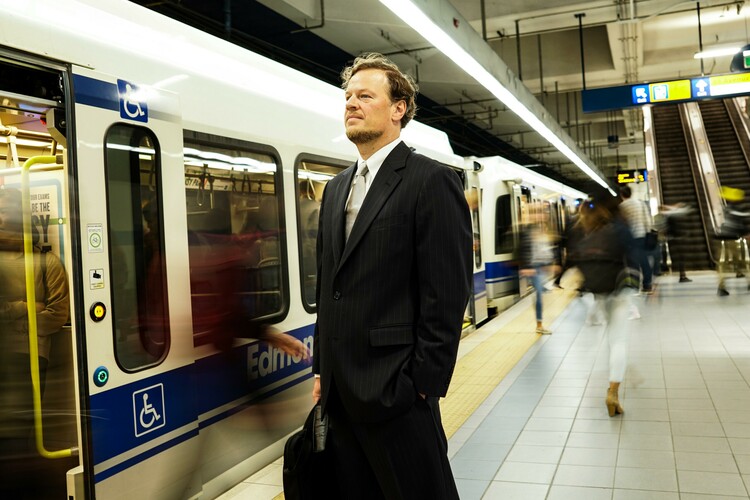 Future Energy Systems Principal Investigator Joseph Marchand on his way to the first meeting of the Government of Alberta's Minimum Wage Expert Panel, which he Chairs.

After years of working on labour markets during energy booms and busts, Future Energy Systems economist Joseph Marchand is expanding his focus to include energy transitions

Joseph Marchand recalls finding himself in a lab on the fifth floor of the University of Alberta’s Biological Sciences building, surrounded by hundreds of bottles of bacteria. The labour economist made sure not to touch anything (or put down his coffee cup) as graduate students from the Stein-Sauvageau lab explained how they were studying and genetically engineering bacteria to convert a greenhouse gas –– methane –– into a useful product –– jet fuel.

“It’s great to witness the scientific method at work. They are using bacteria as an input to production, much like a workforce, altering their conditions to make them more productive,” he says. “That’s fundamentally and methodologically similar to some of the empirical methods of labour economics, but our treatment and control groups are made up of hundreds of thousands of workers within each local labour market. We obviously couldn’t fit all of those people in one lab –– let alone into one container.”

Marchand’s lab visit took place in July 2018, a few months after he joined the Future Energy Systems research program. As an economist, he hadn’t been in a microbiology lab since high school, and the idea of using bacteria as a part of production –– or as an ‘input’, in economic terms –– seemed like science fiction. 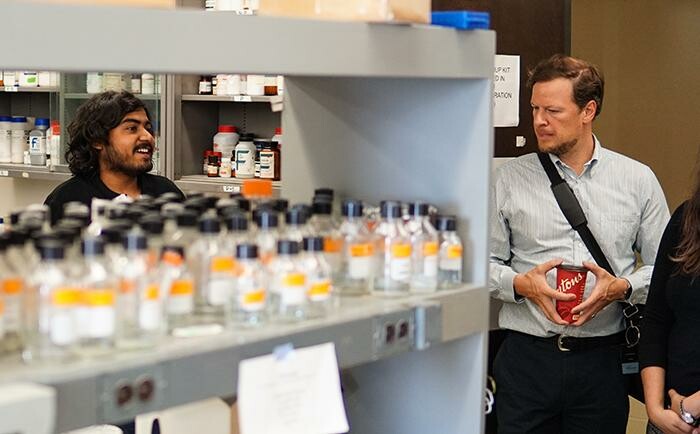 However, the scientific method of microbiologists and engineers was very familiar to him, because it is fundamentally the same that he has relied on for more than a decade of pioneering research into the effects of energy booms and busts on North America’s labour markets. He continues to use this approach for his new research focus: the impact of energy transition on local labour markets.

“For the past several decades, higher energy prices have acted as a positive shock to the demand for labour in local areas with energy resources, expanding earnings and employment,” he says. “The idea of completely changing the way that our energy system works is going to make people wonder what types of jobs will then be available and where they will be located.”

Booms and busts as treatments

Marchand and his wife –– also an Associate Professor in the Department of Economics –– moved to Edmonton in 2007, arriving amid one of the largest energy booms in Alberta’s history. The development of conventional oil and gas, the oil sands, and shale propelled the regional economy to new heights, and the New Jersey native wanted to learn more about his adopted home’s key industry.

He explains: “One of my labour professors at Syracuse University, Dan Black, now with the Harris School of Public Policy at the University of Chicago, wrote the seminal papers on the impact of coal booms and busts on the local labour markets of Appalachia. When I arrived here, I tried to find the equivalent literature for the local effects of oil and natural gas booms and busts in Alberta, but there weren't any with a proper focus on identification.”

To fill in this gap, Marchand began to study the impacts of energy price shocks on communities across Western Canada, including the direct effects in energy extraction and all of their relevant spillovers. For example, for each additional energy worker hired during a boom, there are additional people hired in other local sectors. He also investigated distributional changes and found that economic inequality increased during booms –– albeit in an unexpected way. 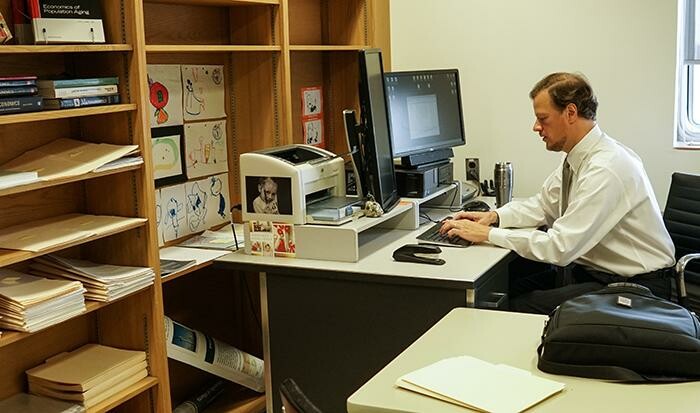 “During Western Canada’s energy boom in the late 1990s to late 2000s, the number of individuals living in poverty was roughly cut in half, meaning that the least advantaged people were benefitting and moving closer to the middle class,” he says. “But at the same time, the most advantaged were earning a whole lot more, thereby slightly increasing overall inequality.”

To reach these conclusions, Marchand didn’t study provincial averages or even those of large cities, where a wide range of factors could influence their labour markets. Instead he looked directly at communities where 10 percent or more of their total earnings were coming from the energy extraction industry. These communities became the ‘treatment’ group and were compared to similarly-sized localities that were not dependent on that industry –– the ‘control’ group.

“For instance, by the mid-1990s, energy extraction produced more than half of the total earnings in the Census division containing Fort McMurray –– and that was before the 2000s boom,” he points out. “When that much economic activity is clearly related to energy, the shock of a boom or a bust in energy prices will have a much larger effect, or what we call the ‘treatment’.”

Like the microbiologists working on bacteria, Marchand studies the effect of those treatments, seeking to identify how they affect labour markets. In the context of the energy transition, that also means asking about what types of jobs a renewable energy boom could bring to Alberta.

But what does green mean?

When thinking about an energy transition, one way for a government to achieve the goal of a greener economy is through environmental regulation. For example, in working with fellow University of Alberta economist Dana Anderson, Marchand has been examining the impacts of Canada-wide standards for ozone and particulate matter on local labour markets, in order to answer whether more stringent emissions standards would lead to significant job or earnings losses.

During a two-week visit to the Grantham Research Institute on Climate Change and the Environment at the London School of Economics and Political Science last October, Marchand presented their preliminary findings. They found that the more stringent regulation had not caused job losses across Canada, but rather the policy had significantly reduced earnings, laying out a specific potential consequence of an energy transition.

Despite being traditionally specialized in ‘brown’ energy sources, Alberta is theoretically well-positioned for a ‘green’ energy boom thanks to a lot of wind in the south, and a lot of sun in the summer. Many have seized upon this potential to speak about a future involving green jobs, instead of the existing brown jobs based on conventional energy. However, the very definition of a brown or green job has not been settled.

“For example, heating, ventilation and air conditioning (or HVAC) employees are classified as being green, because of their installation of energy efficient heaters –– despite the fact that if these employees were installing new air conditioners each and every day that would likely spell disaster for the planet,” Marchand points out. “So, if we’re going to have a serious conversation about energy jobs, we need to make sure we’re defining the key concepts in a reasonable way, rooted in science.”

One way these definitions are constructed in the literature is to examine the tasks and skills associated with different occupations. This approach has gained traction recently, showing that the hollowing out of the middle class in developed nations over the past few decades was attributable to factors such as technological change, favouring machines as inputs over workers. 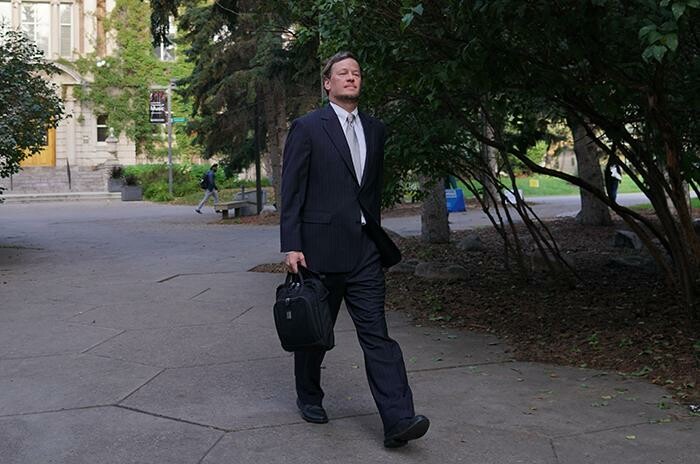 “This means an increased need for operators, fabricators and labourers, as well as those involved in production, craft, and repair,” he explains. “Therefore, the conventional energy boom helped a lot of people in the middle class. The related question going forward is whether a green energy boom would do the same for Alberta or in a similar setting.”

Marchand is quick to caution against assuming that one type of boom or bust can be better or worse for one labour market over another. Each shock is unique and will have its own distinct effects on its localized market. Therefore, the setting matters when analyzing the treatment effects of any shock –– or policy for that matter –– and it’s true for any experiment more generally.

For instance, in a piece published in the Winter 2020 issue of the Journal of Policy Analysis and Management with the University of Pittsburgh’s Jeremy Weber, Marchand explores the educational effects of the recent shale boom in Texas. In that state, oil and gas wells are taxed locally as real property, turning them into a major revenue source for schools. At least fifteen states in the U.S. tax oil and gas wells as property, whereas at least ten other energy producing states do not.

“We found that, despite a tripling of the local tax base and increased revenue and expenditures, school districts in Texas saw their students’ test scores decline,” he says. “This can partly be explained by the increased teacher turnover and an increased percentage of inexperienced teachers, as the additional spending did not go to teachers, but rather to capital projects and debt service. But that experience is unique to Texas and states with similar regulatory conditions.”

In a similar vein, a policy paper Marchand published more than two years ago evaluated the potential effects of a $15 minimum wage. While the first half described the general effects of minimum wages on labour markets, the second half anticipated how those effects would play out in the particularly-sized labour market of Alberta –– a place reliant on energy extraction and its exposure to booms and busts. On the strength of this work, Marchand was appointed as Chair of the Minimum Wage Expert Panel by Alberta’s Minister of Labour which is currently assessing the effects of that policy.

“There is quite a difference between analyzing a policy a priori –– before the policy is in place –– versus posteriori –– after the policy is fully in place,” he explains. “Luckily, we now have the data that wasn’t available in 2017, so this data can help us understand what happened as a result.” 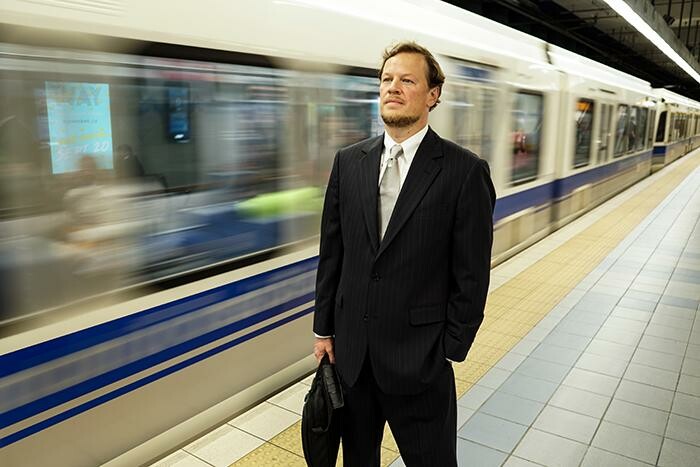 As a graduate of the Maxwell School of Citizenship and Public Affairs at Syracuse University –– America’s top-ranked policy school – Marchand takes pride that, just over a decade removed from his doctoral studies, he is now directly engaging in policy evaluation. By applying scientific methods, he believes that he and other economic researchers can help set realistic expectations for energy transition, ensuring policy makers have the tools they need to prepare for the changes ahead.

“Whether dealing with bacteria in the lab or with job gains or earnings losses throughout the region, our work as researchers is rooted in applying the scientific method and in asking and answering vital research questions in particular settings,” he concludes.

“Important decisions are being made each and every day that will impact people’s lives and those decisions will need to be based on solid evidence.”

To learn more about the project The Future of Energy and What It Means for Labor Markets, click here.