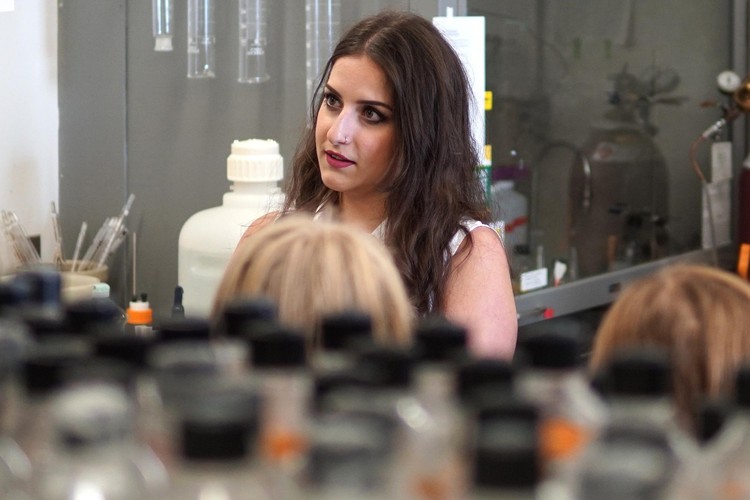 Testing genetically-engineered bacteria is an everyday reality for researchers working on the Future Energy Systems project Bioconversion of Single-Carbon Effluents into Biofuels and Biofuel Precursors. In multiple labs across the University of Alberta’s north campus, that team’s microbiologists and bioengineers assess which methanotrophs –– non-pathogenic, methane-consuming bacteria –– produce useful products like the jet fuel precursor isoprene in optimal quantities, and under what conditions.

During the first Future Energy Systems Open Doors event this week, Lisa Stein and her team welcomed interested members of the public and researchers from across the program for a tour of their lab in the Biological Sciences building. Stein set the stage, then her graduate students spent an hour explaining their tools and methods to a diverse group including elementary school students, mechanical engineers, chemists, a political scientist, and an economist.

Exploring the similarities and contrasts between labs in different disciplines proved highly informative in numerous ways. Principal Investigators like Lori Thorlakson and Joseph Marchand –– both leading projects in the System-Wide theme –– had the chance to see the experimental beginnings of technologies whose political viability and economic impacts they will help understand.

At the same time, technical researchers from other disciplines –– like the graduate students from the Dynamic Thermal Energy Conversion Laboratory –– had the chance to compare principles and techniques with counterparts who are approaching renewable energy from a completely different perspective.

The opportunity to visit peers from different disciplines yielded unexpected and valuable connections. For instance, chemist and solar theme researcher Anton Oliynyk found similarities between how Stein’s group models the genetic structure of bacteria and how his group uses machine learning to identify viable materials and catalysts for use in solar cells. A future joint workshop is already being discussed.

With nearly 70 projects now underway, Future Energy Systems research is being conducted in dozens labs across the University of Alberta, and with partner institutions like the University of Calgary. Future Open Doors events will continue to cross disciplines and provide opportunities for our researchers, HQP, and members of the public to learn more about cutting-edge energy research.