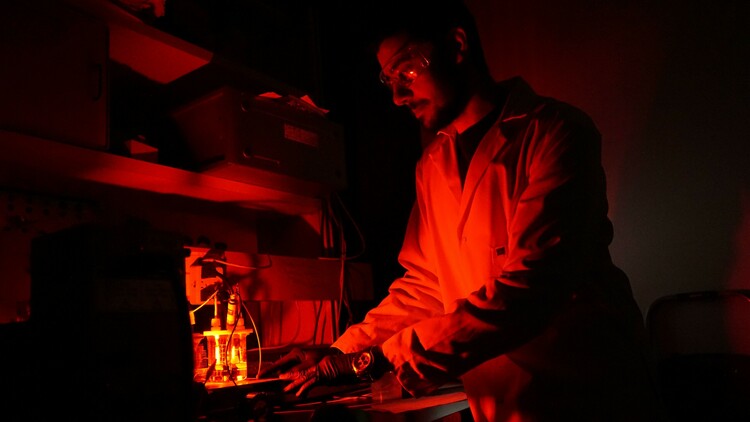 Engineering Professor Karthik Shankar and his team have developed a new method of light-driven carbon dioxide conversion, increasing the range and control of what products can be harvested from a promising method known as photoreduction.

A recent breakthrough during his team’s investigation of a specially-made photocatalyst –– titanium dioxide nanotubes augmented with silver and copper nanoparticles –– has opened to door to producing multi-carbon products like ethane, which is much more valuable than more common single-carbon products such as methane or carbon monoxide.

“This piece was missing. There are multiple products for CO2 photoreduction, but researchers previously could not produce high quantities of products that are this valuable,” Shankar says.

He explains that carbon monoxide is worth about six cents per kilogram, and natural gas (mostly methane) 12 cents per kg, but multi-carbon ethane and propane are priced at 15 cents and 45 cents per kilogram respectively. Catalysts usually produce a mix of these, with high proportions of the simpler, lower valuable components. Shankar’s nanoparticles produce high amounts of ethane, and are made of much more economical materials than the gold, palladium, and platinum that are typically used in catalysts for photoreduction. 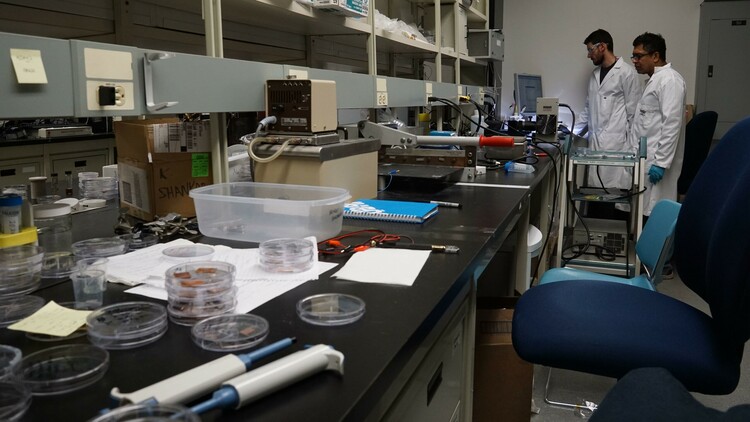 The higher value of ethane and propane comes in part because they have historically been more difficult to produce. The trouble starts at the most basic level: electrons.

Carbon dioxide does not transform into methane or ethane directly. It takes multiple steps, and the greater the complexity of the product, the more steps required –– methane production requires only six to eight steps, but ethane takes fourteen.

“More steps means more opportunity for the process to fail, if your catalyst isn’t optimized to select for production of ethane over the others,” Shankar explains.

Ehsan Vahidzadeh, a PhD student in Shankar’s lab, is lead author of the study which was recently published in Applied Materials and Interfaces. “Selectivity is an important aspect. Our photocatalyst is more selective to ethane,” he says –– meaning that it is more likely to complete the necessary steps to create that valuable product. In fact, at over sixty percent selectivity, their photocatalyst is one of the highest values ever reported in the field.

The ‘steps’ required in carbon dioxide photoreduction refers to the step-wise transferring of electrons between atoms. This process is difficult, as electrons need to be separated - prevented from their natural inclination to form pairs. Holding the electrons as such allows for the formation of reaction intermediates –– highly unstable molecular forms that last just long enough to allow the transition from the initial chemical structure to the next.

Photocatalysts like the one developed by Shankar’s group create a static electric field between parts of the catalyst that hold charged electrons apart, creating what are known as electron-hole pairs and Schottky junctions. While they’re unpaired, the electrons can transfer from their original location to a new one, allowing the conversion process between CO2 and ethane to take place.

“A photocatalyst that can stabilize these radicals better and provide a lot of electron−hole pairs is more successful in the production of ethane,” Vahidzadeh explains.

“It’s even more important in this case than usual,” Shankars adds. “Losses along the process - electrons recombining - hurt you for simple one-carbon products, but will absolutely cripple you with ethane.”

For the Shankar group’s catalyst, it's the silver-copper nanoparticles and the titanium dioxide nanotube components that form the critical Schottky junction. It has high electron-hole pair stability, meaning a much higher proportion of intermediates can continue to react past the point of carbon monoxide and methane, and onto the more profitable and complex level of ethane.

“Our metal nanoparticles become slightly positively charged. This better stabilizes the radicals that are the reaction intermediates,” Shankar explains. “Each one serves as a waystation for electrons as they move through the steps towards ethane.” 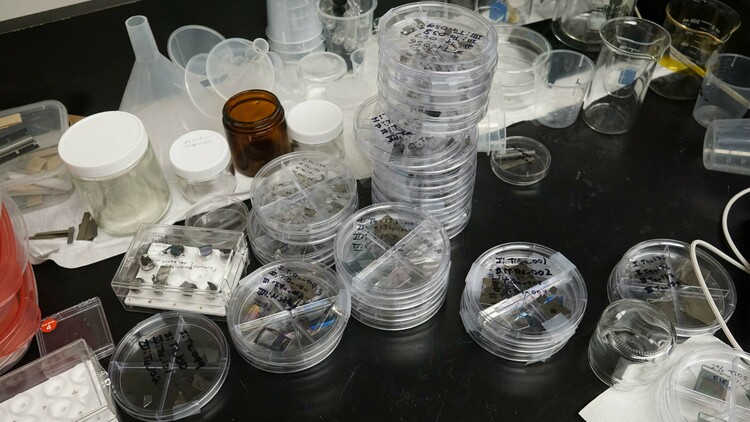 Some of the many photocatalyst prototypes and experiments developed in Shankar's lab.

Creating a photocatalyst suitable for ethane production is not a straightforward process. While successfully separating electrons is significant, it’s not the only challenge.

Carbon dioxide contains only one carbon atom. Ethane requires the formation of a carbon-carbon bond which is difficult because similarly charged carbon molecules naturally repel each other. The structure and chemistry of Shankar and Vahidzadeh’s catalyst is specifically designed to overcome this.

“We solved it using concepts from electrical engineering,” Vahidzadeh says. The nanotube catalyst is covered in reaction sites where the electron transfer steps can take place. By making sure that neighbouring reaction sites have slightly different opposite charges, the team have created an attraction force that can help overcome the repulsion.

This slightly asymmetrical charge distribution is known in the field as multipole plasmonics, ‘multi-pole’ meaning that there are multiple electrically-charged poles present and ‘plasmonics’ that there are electrons vibrating in a band around the atom and able to be injected onto other nearby atoms.

“It’s truly a multidisciplinary work. There’s chemistry to know how things react and chemical engineering, electrical engineering and electromagnetics with the plasmonics, condensed matter physics in how to separate electrons,” Shankar says.

Shankar’s group has been improving photocatalysis since 2012. Previous work has focused on maximizing the light harvesting efficiency, essentially allowing more carbon to be converted and more product produced. This new avenue allows them to address another potential limitation of the process, and they plan to bring the two aspects together in the future.

“The productivity is nowhere near maxed out yet,” Shankar asserts. “The nanoparticle distribution, can be improved, because they currently tend to get stuck at the top of the tube in manufacturing –– not spreading well down the length.” Vahidzadeh is still considering possible experimental solutions to that problem, including manipulating the width and length of the tubes, as well as planning new methods to monitor the intermediates during the photocatalytic process.

“COVID made it much harder to get back to the lab, so we had a decision to make: spend more time trying to perfect what we have, or put it out to the field where it can be of use now,” Shankar concludes. “There will be follow-ups though and one particular goal is to selectively produce even higher value hydrocarbons such as ethylene and propane.”

For another story about work from the Shankar group, click here.