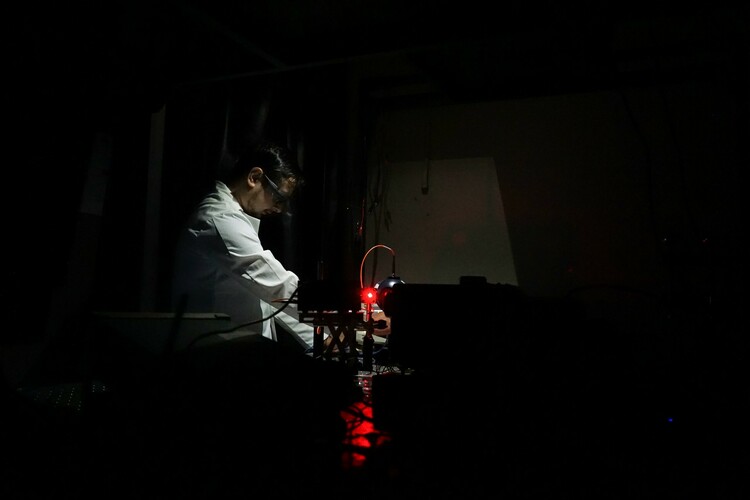 Conventional wisdom may tell us that money doesn’t grow on trees, but it doesn’t say that energy can’t fall from the sky. As an Engineering lab at the University of Alberta is proving, harnessing the energy freely available in solar power may simply be a matter of chemical reactions.

“It’s much more efficient to convert the energy of the sun into a portable fuel, which can be transported to wherever you wanted and then used there,” explains Electrical and Computer Engineering Professor Karthik Shankar.

One of the reasons why fossil fuels are so popular, he adds, is because they have a high energy density and they’re portable. “You can carry them to wherever you need them. That’s difficult now with solar because the battery technology isn’t there yet.”

In Shankar’s mind, the way to make solar energy more portable is to use the sun’s energy to power other reactions that produce fuels which are more easily moved.

“We’re trying to convert CO2 into value-added fuels, and to split water to generate hydrogen,” he says. They’re doing that through research into groundbreaking new catalysts.

A catalyst is a substance that improves the rate of a chemical reaction without participating in the chemical reaction. They’re common in industrial applications, and are usually used at high temperatures where heat drives the reaction, accelerating the process. But adding heat to a reaction requires energy, decreasing efficiency and increasing cost. Shankar is seeking to remove that barrier.

“In photocatalysis you use light to power the reaction, and you can perform the same reaction at room temperature.”

The question is which catalysts are best for which applications. 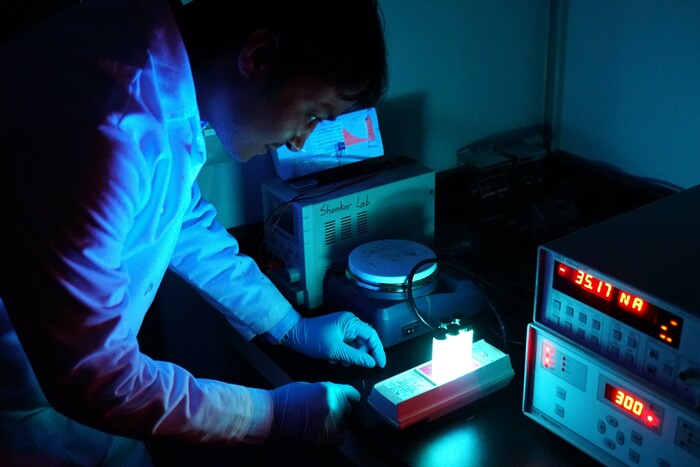 The synthesis of graphene, a two-dimensional carbon molecule, in the early 2000s prompted an explosion of research, and garnered a Nobel prize for Andre Geim and Kostya Novoselov for their groundbreaking experiments. There was a good reason for all the excitement.

Pawan Kumar, a Post-Doctoral Fellow in Shankar's lab, explains. “There were some fantastic applications to graphene, like conversions and catalysis. But there were challenges to be solved.”

Graphene is known as a “zero bandgap semiconductor” –– not a metal or a semiconductor, but possessing properties in between the two. The ‘bandgap’ is an energy range in a solid where no electron states can exist. The presence of a small, finite bandgap is important to provide a range for light to be absorbed, but graphene naturally has none.

“That presents difficulties for its usage in actual real world applications,” Shankar explains.

“Opening a bandgap in graphene has become a new field over the last decade,” Pawan elaborates. “The theoretical ideal we want is about 1.5 electon-volts.”

That proves to be a challenge in the current field. The main graphenic semiconductor that most research groups are  working on, g-C3N4, has a bandgap of 2.6 electron volts. The Shankar lab therefore decided to go another way. Recently published in the Journal of the American Chemical Society, Pawan, Karthik and others found that a new graphene compound, C3N5, leverages a slight formula change to deliver an entirely new new graphenic semiconductor, with improved properties.

Karthik is eager to see what improvements this new compound could lead to in the field.

The application of water splitting is one Shankar highlights as having great potential. “You just split water into hydrogen and oxygen, and then you can burn the hydrogen as fuel –– creating more water in the reaction. You’re not producing any toxic waste, it’s a closed cycle reaction.”

The breakthrough –– cited as “remarkable” by the journal –– will be valuable for the applications Shankar's group is pursuing. But their catalyst work doesn’t end with graphene. 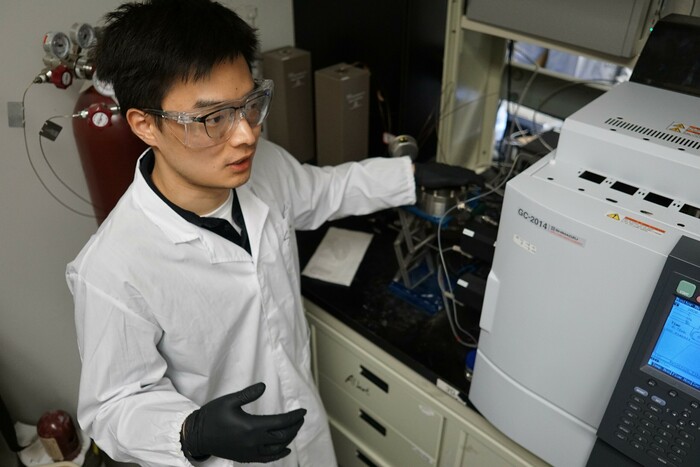 Many other types of photocatalysts exist, including titanium-oxide (TiO2) based technologies. In contrast to graphene-based catalysts, research into TiO2 compounds focuses on compositional doping –– basically, including other compounds into the catalyst structure –– to narrow the bandgap.

“We want to find catalysts to transform carbon dioxide into useful products,” Shankar says. “This would help us get CO2 out of the atmosphere, and possibly give us useful chemicals in the process.”

To address this question, the Shankar Lab created junctions of TiO2 and gold nanoparticles which exhibit what’s known as a ‘plasmon resonance’. Within the larger family of phenomena known as ‘quantum quasiparticles’, this is a term given to the collective and coherent -- coordinated -- oscillation of a large number of electrons. In some materials, including silver and gold, these plasmons are excited simply by being exposed to visible light.

This resonance doesn’t last forever though. Over a timescale of picoseconds -- one trillionth of a second -- plasmons lose their coherence and return to normal behaviour, at thermal equilibrium. Junctions between the gold nanoparticles and a semiconductor, if properly designed, enable the plasmons to do something useful while they last, including, for example, driving a chemical reaction before dying out.

In the process of forming junctions between TiO2 and gold nanoparticles to harvest visible light, doctoral student Sheng Zeng discovered a new benefit: “We can use one catalyst to produce multiple products depending on the color of the light used to illuminate it.”

Catalysts already exist that can convert CO2 into methane –– natural gas –– that can be used as a fuel, or converted into specialty chemicals like formaldehyde. But each of these catalysts can only create one end product.

By using gold nanoparticle decoration on the surface of TiO2 to narrow the bandgap, Sheng also created a catalyst that can be used to make both methane and a formaldehyde/carbon monoxide mix, and can be controlled to produce different products depending on the wavelength –– or colour –– of light shining on it. The work was recently published in Applied Catalysis B: Environmental

“This is the first time this kind of scheme has been achieved with titanium oxide catalysts,” Shankar says. “The extreme and tunable selectivity of the products we can make hasn’t been reported before this.”

The discovery has the potential to be eminently useful. Instead of needing to change catalysts to produce different products, or design a multi-catalyst process, industry will be able to streamline outputs.

“This kind of control isn’t just a party trick,” Shankar elaborates. “It will be extremely important to transform CO2 into pure products to avoid further separation and purification costs, so the high selectivity is critical. To reliably know that they can generate a mix, a pure product, or whatever they need, adds value.”

The economy of the future 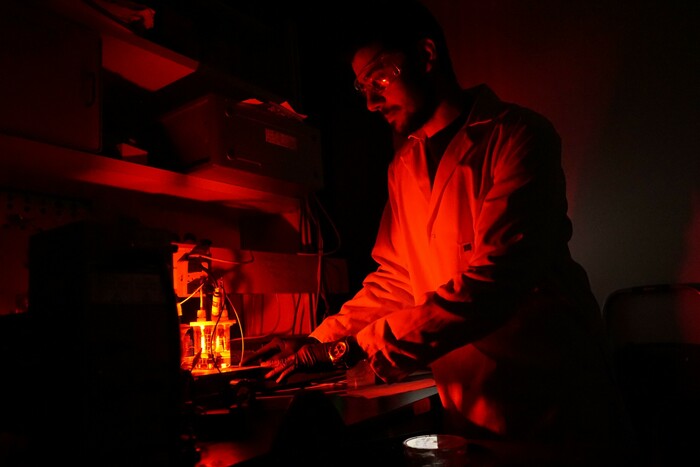 Shankar sees the pioneering photocatalytic work his students and researchers are doing as stepping-stones to a renewable future.

“The Arctic sea ice is thinning, we have irrefutable evidence of global climate change,” he affirms. “There’s a lot of concern from the environmental point of view regarding what to do with all the carbon being emitted in the form of carbon dioxide. Well, plasmons and graphenic semiconductors present a potential solution.”

He sees the water splitting work of the graphenic semiconductor, C3N5, as having incredible potential in the new clean energy economy. Another large role could be filled by the plasmonic titanium oxide catalyst, Au-TiO2, immediately applicable to sequestering carbon, transforming it into usable fuel, and mitigating the harmful effects of carbon dioxide release we currently face.

“We’ve demonstrated materials which show a lot of potential towards being used in some of these applications,” he says. “These reactions are of extraordinary interest to society.”

By harnessing solar power, he sees bright possibilities. The sun’s energy is freely available in huge amounts, and harnessing more of it through these photocatalytic reactions will lead to a cleaner, more sustainable energy future. As for what these breakthroughs might specifically mean for that future, Karthik is himself eager to find out.

“We’ll have to explore the properties of these technologies,” he says. “We hesitate to make assumptions because reality can sometimes be stranger than fiction.” 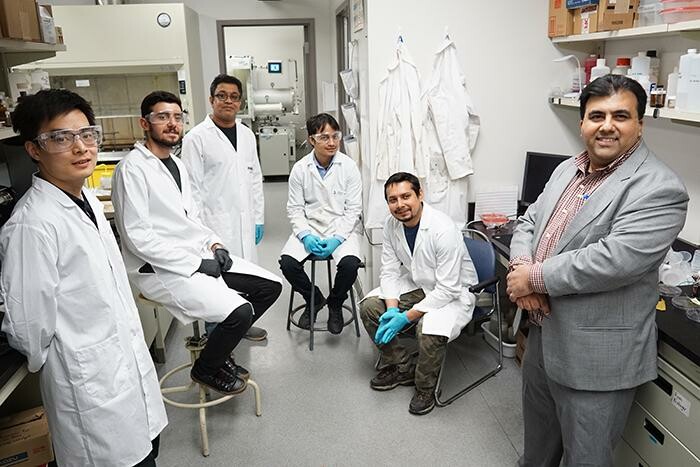