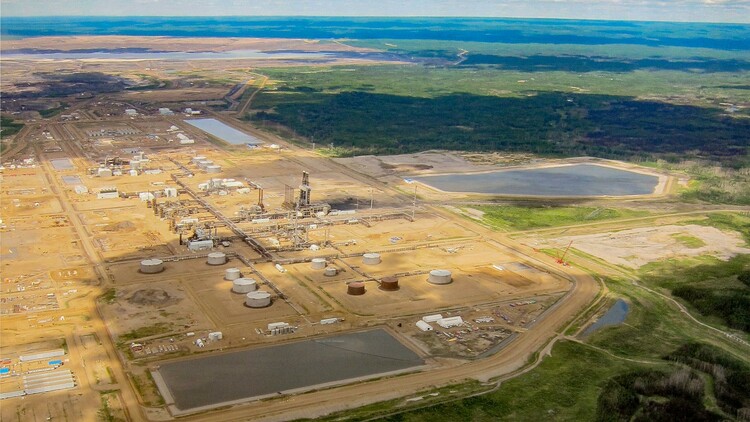 Extracting bitumen from the oil sands relies on water – a lot of it. During the extraction process, water is contaminated by both bitumen and supporting chemicals. What happens to that water after? It’s a $100 billion question, and right now the only answer is that it’s held indefinitely in large sites called tailings ponds. Some 1.4 trillion litres of oil sands process water (OSPW) currently sit in tailings ponds, and more are being added daily, so the need for effective treatment processes is urgent.

Tailings ponds are only meant to be a stopgap to prevent environmental harm, not a permanent solution. Solving the long-term challenge of OSPW is the goal of Future Energy Systems investigator Dr. Mohamad Gamal El-Din, with the help of his team including post-doctoral researcher Dr. Soliu Ganiyu and graduate students Lingjun Meng and Monsuru Suara.

“The main problem with this water is that the pH is relatively high. It also has lots of organics, and a lot of inorganic ions of different types,” Soliu explains. “The composition is complex and to alleviate the toxicity, we need to reduce the quantity of contaminants to an acceptable level – to a safe level to be released.”

To accomplish this remediation, the Gamal El-Din lab is pursuing an important, sustainable goal: they are attempting to run the remediation with the energy provided by solar power.

“We’re pursuing many angles to see how efficient we can make the process,” Soliu says. “Not only will the process detoxify the water, but also it will be done without any further emissions, reducing the carbon footprint.” 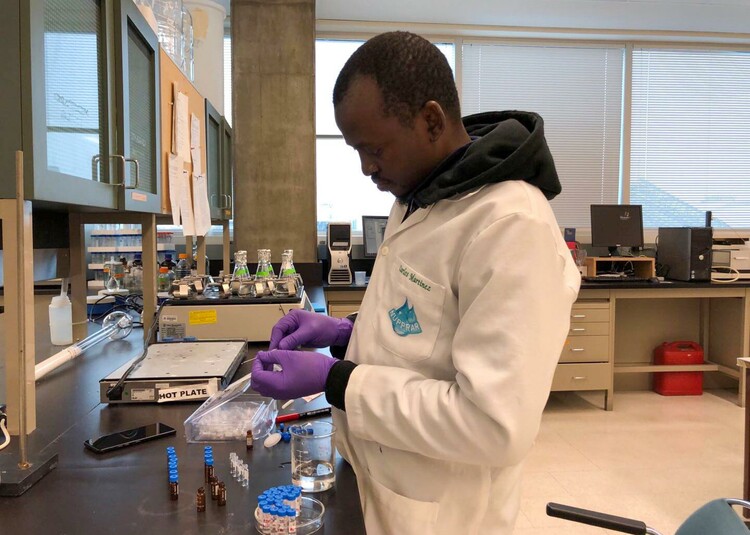 Wastewater treatment can be done in many ways. One method popular around the world and in many different industries is electrochemical treatment, accomplished when electricity is used to instigate chemical reactions that break down toxic or contaminating elements. It is a method that Soliu has had much experience with in the course of his research, and one he’s working to apply to the specific case of OSPW.

“With different wastewater treatments, we’re using the same principles, just applying it to different water matrices,” he says. “The consistency and the components are different, but the process is the same.”

The chemical process in question is advanced oxidation processes (AOP). Wastewater can react differently due to different contaminants and characteristics that affect AOP. For instance, OSPW has a high concentration of organic contaminants, including naphthenic acids, major molecules of concern, that must be removed to reduce toxicity. Generally, organics are easy to degrade using AOP, making it a good candidate for use in OSPW.

However, other factors are also important to consider, including conductivity, which is vital due to the usage of electricity for the process and which usually has to be increased for the treatment process to function. For instance, distilled water generally will not conduct electricity, meaning electro-AOP or EAOP could not work for its treatment.

“Fortunately, unlike many cases, OSPW actually has a high enough concentration of ionics – inorganic ions – that the conductivity is naturally sufficient,” Soliu explains. These ions can also get in the way though, previous research has shown, competing with the desired AOP. “The technology itself is not new; a lot of work has been done. The major issue is how to scale up to the volume we need, and identify how to solve these potential problems for this particular scenario,” Soliu says.

He is also aware that an electricity-requiring process could contribute to carbon emissions if hydrocarbons are used to provide power. That’s why he’s also pursuing integration of solar voltaic energy – a renewable source – to power the electrochemical reactor.

His work also considers implementation, and the improvement of electrodes and catalysts that are vital to the operation of the electrochemical reactor. The best electrode, for instance, is made of diamond, which is an expensive prospect. “Graphite was being investigated as a replacement, but it doesn’t have the same lifespan,” he explains. The optimal process is one that will operate at a high efficiency while remaining low cost for companies and stakeholders to adopt, and with an acceptable quality of effluent being produced.

“Personally, I still think there’s a lot of work to be done if we ask how to commercialize this process, but I think it can be very effective and efficient if we continue to work at it.” 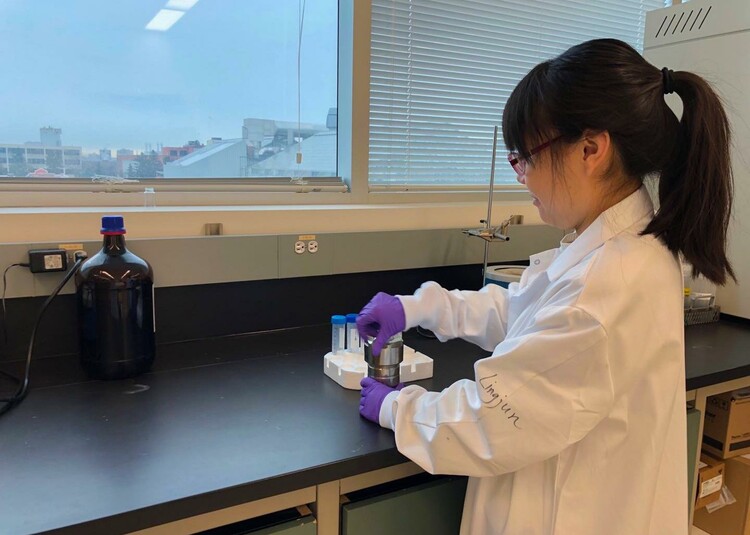 While electrochemical AOP can be linked to solar power, it is not the only way that researchers in the Gamal El-Din group are looking to put the sun to work in OSPW treatment. Graduate students Lingjun Meng and Monsuru Suara are focusing their efforts on developing a more direct connection between the sun and water remediation: light-powered catalysts that directly act on and break down tricky, toxic OSPW contaminants.

Solar catalytic treatment of OSPW would bypass the need to provide electricity to power the remediation process, another method of reducing the remediation carbon footprint. The question is which catalysts to use and how to make them more suitable for the process. Currently, one critical limitation in catalyst performance is efficiency, a challenge Lingjun’s research is aiming to overcome. To understand how, you need to look at the electrons.

Lingjun got that to happen by creating a catalyst with a three-phase structure, a more complicated operation than the typical one-phase structure many catalysts employ. With a one-phase catalyst, it’s easy for the electrons to jump right back down to the valence band. The three-phase structure can be envisioned as a Z-shape, with an intermediate phase in between the two bands. “First, the electron goes to the conduction band, then down to the intermediate third phase, then jumps back up to an even higher level,” she explains. “Because there is an additional stage, it can stay excited longer, and it works well to increase the efficiency of the catalysis.”

The specific contaminants that Lingjun’s catalyst breaks down are naphthenic acids, which composes a large portion of the toxicity in OSPW. “After two hours, acute toxicity is almost gone, and with a six-hour treatment, almost all the NA has been removed completely,” she says.

Changing electron pathways is one method of increasing efficiency, but not the only one that the Gamal El-Din lab is looking into. “Many people looking at solar catalysis are using materials that are activated by UV light only. That makes up only two to three percent of light though,” Lingjun explains. “We want to use a material activated by visible light – to make the most of the sunlight.” 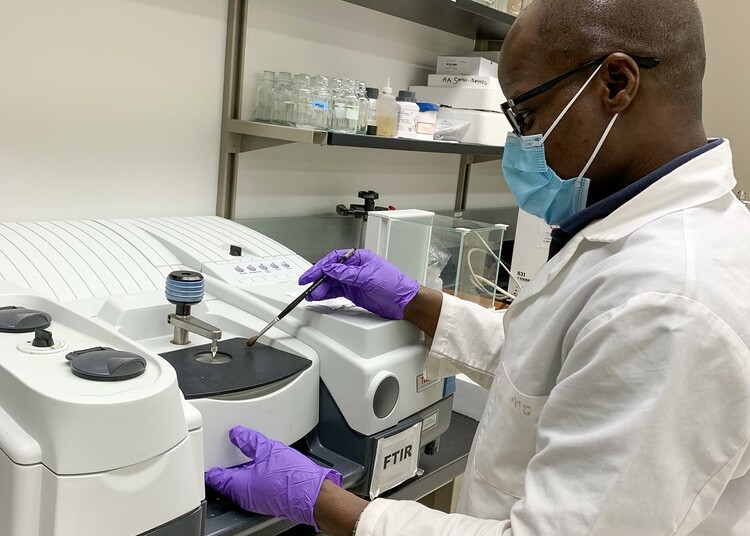 Choosing a catalyst to capture more of the 97-98% of light that is not in the UV range, and further improving that catalyst’s performance, is Monsuru’s research goal. “It’s less expensive and energy intensive to use natural solar light than to create UV,'' he explains. “So, how do we extend the range?”

To begin his work, he started testing different commercially available semiconductor catalysts, as well as those found in the literature. Due to its role in toxicity, naphthenic acid is also the target of Monsuru’s catalyst. “We saw really good performance for zinc oxide, so that’s what I chose to focus on.” Next comes the research into improving performance and efficiency.

Increasing the light-reactivity of photocatalysts can be done in many ways. Some include Lingjun’s method of increasing the electron scheme to a heterojunction like her Z-scheme, with multiple stages of electron excitation. The catalyst could also be doped with other metals to enhance its optimal characteristics. Specific modification of the fabrication of the catalyst is also an option, whether modifying the crystal structure – the way the specific component atoms are arranged in the molecule or material – or modifying the size to change factors like the ratio of surface area to volume.

Monsuru’s work isn’t focused on any one pathway. “We will try all of them. Our major focus is increasing the capability in the material to use visible light,” he says. “The goal is the main thing, so we’ll use whichever method helps us get there.”

Currently, he has successfully reduced the size of the catalyst, working in the nanoscale, and seen an improvement in visible light range. “We can get it smaller still, but then it can become an environmental issue if it washes out,” he says. “We have to keep aware of how and where it will be used when we’re making these decisions.”

Making the most of it

So, which technology is best for OSPW treatment? Soliu does not believe that there is a single simple answer.

“There is no single technology that doesn’t have both advantages and disadvantages,” he explains. “We look into all of them, see which ones will be easier to scale up, to adapt, to implement in the field, and will be acceptable by the community and society they serve.”

It is also likely that the answer will be a combination of processes fitting together into one system. “We are now combining this electrochemical treatment with biological processes,” he says. A one-hour treatment with his AOP setup degrades all organic components present in the OSPW samples to biodegradable components. “A longer biological treatment – for instance, adding certain kinds of microbes – can then degrade all the components left.”

The major issue he sees is a familiar one in research: how to scale up the technology for implementation. Right now, he’s working with a 400 litre reactor, but the amount of OSPW produced daily is immense. The Gamal El-Din lab is rising to the challenge by thinking outside the box –– or, in this case, outside the reactor.

“Can we treat the OSPW while in the pipe, as the water is being transported from site of usage to tailings pond? That’s a question we want to look into,” Soliu says. While keeping mindful of the economics of the situation, including commercial availability of catalysts, they are also considering whether the process could actually make money for companies who employ it.

“Is it possible to capture the inorganics – the carbonates especially – and confine them, transform them into value added chemicals like formic acid, acetic acid?” he asks. “It would open a new revenue stream from wastewater treatment, and recovery of resources.” That could be of huge benefit. “It might help encourage industry to adopt this process and speed up the timeline to solve this huge problem of the tailings ponds.”

To learn more about the project Soliu, Lingjun, and Monsuru are working on, click here.