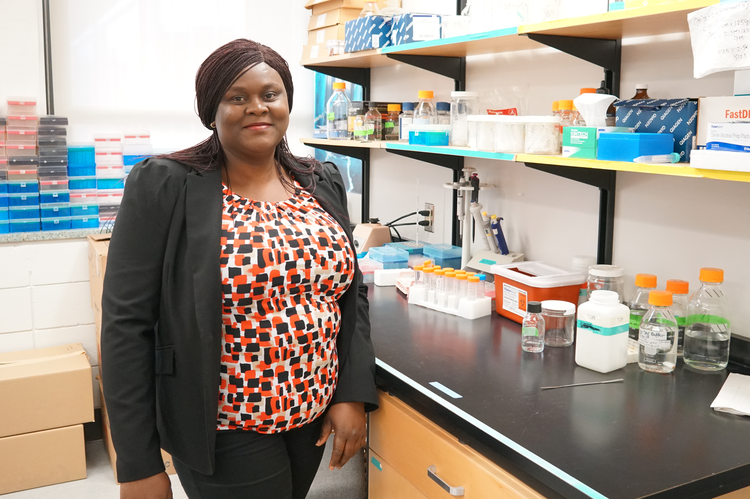 Future Energy Systems Post-Doctoral Fellow Gloria Okpala has studied on three continents, and hopes to use research to make a better world

To Gloria Okpala, being in academia means uplifting those around you.

“Teaching is about bringing students up to the point of motivation, of enjoyment, being able to use that knowledge,” she says.

This attitude has driven Gloria in research, outreach, and teaching for years, and she’s recently demonstrated it through her participation in Telus World of Science Edmonton’s ReseachZone training, where she developed a research activity that made her work accessible to children and their parents.

Then she found herself presenting it to University of Alberta President David Turpin.

“I couldn’t believe it,” Gloria laughs about the experience.

It happened at the launch of the Energy Systems Signature Area last May, when Gloria –– along with other Future Energy Systems postdocs and graduate students –– were asked to showcase their research in an innovative way. The photo of her conversation with the President ended up leading the Folio story about the signature area’s launch.

Gloria may be modest about her experience teaching senior administrators about bioremediation, but she is not shy about the importance of the principle underlying that experience: the role of science in changing the world, and her dedication to being one of the people who will effect that change. Her efforts in this area are notable. While completing her PhD at the University of Calgary, she honed her skills by enrolling in a year-long teaching training course, where she developed a lab component to a previously seminar-based petroleum microbiology course.

“There was no lab space to do it in, so I prepared everything for the experiment and brought the lab to the class,” she recalls.

Gloria’s work resulted in a complete, real-life experiment about corrosion – a common topic of concern in the petroleum industry – that generated actual data her students could analyze and debate.

“I also organized lab tours of all the petroleum microbiology labs for the students to see what research really looks like, what it is,” she explains. “I think it’s helpful to see it the way it is, not just theoretical.” To Gloria’s knowledge, the course still uses the data she generated with the students to this day. It’s one small contribution of her academic career to date, and she hopes to make many more.

Biodegradation Around the World 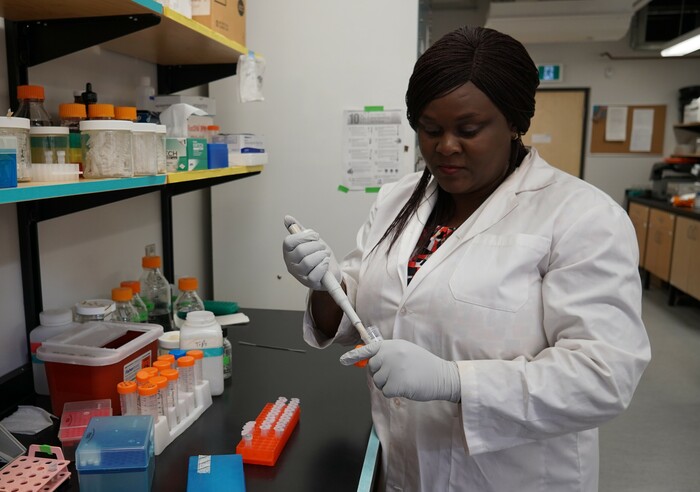 Gloria is a postdoctoral fellow in the lab of FES researcher Dr. Tariq Siddique. Her path to the University of Alberta took her across the ocean from her home in Nigeria, where she completed her undergraduate degree in Microbiology at the University of Nigeria.

“At first, I wanted to be a medical doctor,” she laughs.

It was during her final year of undergraduate study that Gloria encountered Professor Christian Iroegbu, who changed her life. “He was so inspiring, and he made me see microbiology as something that can help fix things that are going wrong.” It was through his mentorship that Gloria was first brought into the field of bioremediation, via a term project.

The Niger Delta region is home to an unfortunately large number of oil spills, resulting in high amounts of water contamination.

“It’s a big problem. But bacteria can live in those areas. So we were looking at how those bacteria’s biosurfactants and bioemulsifiers effect the degradation of crude oil,” she explains.

A biosurfactant, or bioemulsifier, is a microbial product that reduces surface and interfacial tension between two phases, meaning Gloria spent a good deal of time shaking bottles, examining the micelles –– lipid-enclosed bubbles –– that formed, and determining whether they helped increase the rate at which bacteria degrade oil components. She was doing work that could improve her country’s environmental circumstances, and the experience and mentorship left a lasting impression.

“In the end, Professor Iroegbu told me, it doesn’t matter what area you choose, go into it and give it your best,” Gloria reminisces. That advice stuck, and while she was completing her national youth service, her determination and her newfound interest in bioremediation remained strong.

“In that year I drew up my plan. I told myself: Gloria, you have to go back for your Masters.”

That’s exactly what she did, completing her Masters at the University of Nigeria in 2010, studying the microbial degradation of glyphosate, a common herbicide, using organisms from rice field communities.

That same year she began her second Masters, this time travelling to Newcastle University in the UK to study hydrocarbon degradation using cultures from activated sludge in wastewater treatment. After graduating in 2011, she decided to pursue a PhD at the University of Calgary in 2014.

“My PhD project was about controlling petroleum reservoir souring, and the microbial causes of that process.” 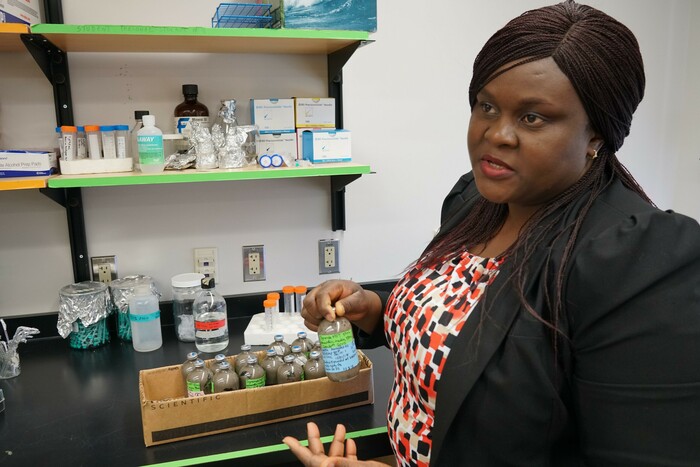 There is no doubt that Gloria’s current work could make a huge difference for the environmental situation in her new Canadian home. Oil extraction from the oil sands currently relies primarily on what’s known as aqueous extraction – using high volumes of high temperature water to blast sand from bitumen. Large amount of fresh water must be used, and the liquid waste generated must be deposited in tailings ponds.

To remove some of these environmental pitfalls, Dr. Siddique’s group, in collaboration with the groups of Dr. Phillip Choi and Dr. Ania Ulrich, researches an alternative method called nonaqueous solvent extraction (NAE). The difference comes in using a complex hydrocarbon solvent, not water, to act as the separator of sand from the bitumen.

“The solvent dissolves the bitumen right out of the sand,” Gloria explains. “There are two benefits: we avoid the use of water, and it makes solid waste.”

This solid waste is much easier to dispose of, eliminating the need for large tailings ponds. But no system is perfect.

“Very small amounts of the solvent may remain in the bitumen or the sand,” Gloria says. “The question is, how do we remove residual solvent? What happens to it in the waste? We can’t just add chemicals to the environment without knowing what it’s going to do.”

When seeking the answer, Gloria invoked another piece of advice from her mentor: “Look at a problem, anywhere, and know that microbiology can solve it.”

Following that principle, she considers whether microbes can deal with the residual solvent. “We know that there are microbes that live in the oil-contaminated environment, they are used to eating hydrocarbons. We need to know how they’ll react to our hydrocarbons, the extraction solvents.” 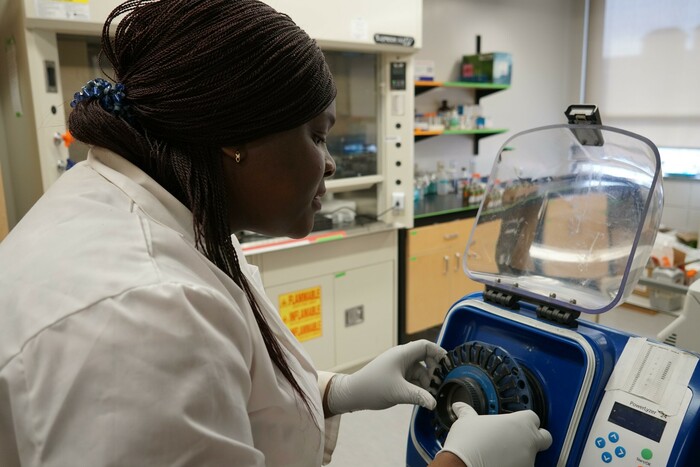 Degrading hydrocarbons is a tricky process, often requiring more than one type of microbe. These microbial communities are capable of living in those highly-toxic, complex hydrocarbon-contaminated environments. To find the right community composition to degrade solvents, Gloria gathered real samples of mature fine tailings (MFT), which naturally become home to a variety of these successful hydrocarbon-degrading communities.

“We can use the communities that are already able to degrade hydrocarbons,” Gloria explains. “They can already do it naturally, and we can take advantage of that.”

The question is how these naturally-occurring communities can be optimized for better degradation. The method: studying microcosms – small scale lab recreations of real-life environments, to see which ones produced better results. Gloria set up microcosms by the dozen and dosed them with MFT samples from oil-sands environments.

Considering the complexity of the microbial community and the broad variety of sites where these communities could be employed, Gloria has had to test a wide range of situations and variables. Luckily, all the hard work is turning into some very promising results.

“We’ve got it so in some conditions, everything is degraded in less than a week. It’s a great condition for bioremediation,” she explains. But other conditions are less cooperative: “Some have been going for about 15 months now without full degradation, so we know which setups make more sense to use.”

The next step will be to add scale and move from the lab to the field. She explains: “We need to look at larger quantities. And because we have access to billions of cubic litres of oil sands process water in tailings ponds, we don’t even need to grow the microbes in the lab. We just collect more process water and MFT and use those communities to do the job.” 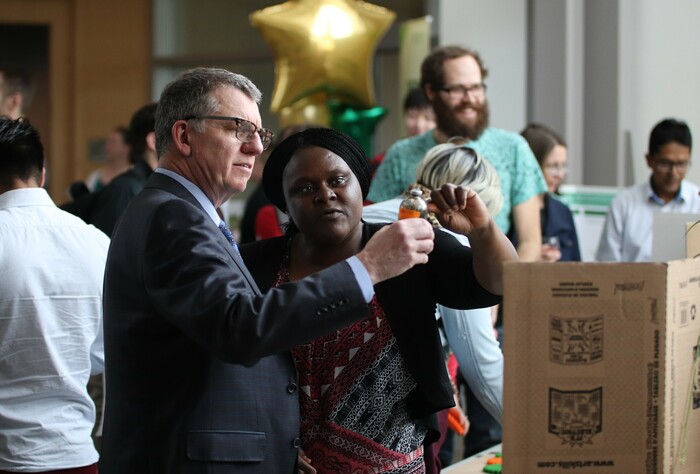 Gloria’s journey to this microbial research project with Future Energy Systems has been long.  Living as a student in three countries was not easy, but the experience has left her well-practiced at charting new paths. The next step on her agenda is no different.

As Gloria looks into the future, she knows which dream she’d like to pursue: “I would love to be a professor if I could. I love to teach, I love research.”

Her enthusiasm for teaching –– whether to kids and their parents, university students, or the President of a university –– is clear: “If I could do that, I would, definitely.”

But in thinking about the future, she sees the value in diverse opportunities and says she can’t be fixated on one pathway. Her journey so far has included four degrees on three continents, and she knows her passion for research and teaching might move her to unexpected places.

“You don’t know where the winds of life will take you. You take what you’re given, and make something out of it. I try to keep open to possibilities when they come.”

One way or another, she will continue to pursue her self-given mission: “I want to solve problems. Research is to help people, to make the world better.”