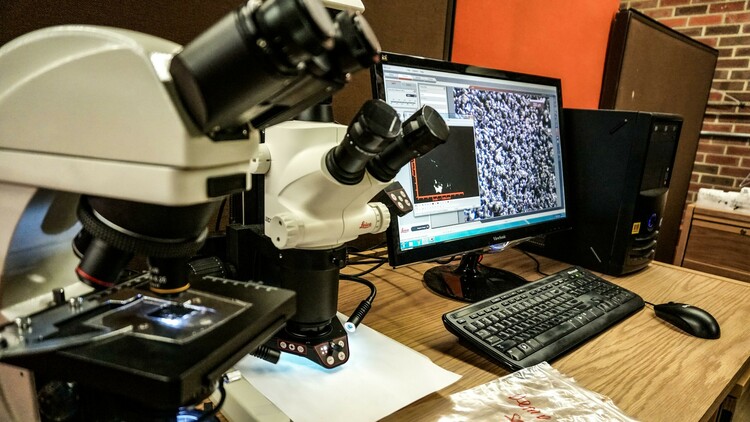 Work in the Secanell lab on hydrogen electrolysis relies on both the experimental - physical testing of electrolyzers - and the numerical - modeling of the processes at play.

Hydrogen electrolysis could be a utility-scale energy storage solution but first we need to better understand the process, experimentally and theoretically

If the phrase ‘hydrogen energy’ brings to your mind images of vehicles powered by gas, with only water as a waste, you’re not alone. Using hydrogen as a clean fuel is not a new idea. Already in use commercially and with lots of promise left to explore, it could become a much larger part of our energy future as we tackle the transition away from hydrocarbon-powered transport.

What might be more unfamiliar is the idea of storing intermittent renewable energy via hydrogen generation.

Occurring within a technology called hydrogen electrolyzers, hydrogen production is the result of splitting water molecules. Investigating and improving that process is at the heart of the research in the Energy Systems Design Laboratory led by Marc Secanell, Professor in the Department of Mechanical Engineering at the University of Alberta, and a Principal Investigator in Future Energy Systems.

Because this is an emerging field, many fundamental questions remain unanswered, and Marc’s group is addressing some of these questions both theoretically and practically. For example, PhD student Manas Mandal tackles experimental electrolyzer testing, measuring outputs and results of new setups. That work is closely linked to the efforts of fellow PhD student Michael Moore, who is helping generate a powerful tool for hydrogen electrolysis researchers: a computer model of electrolyzer technology that could help inform and guide future research. 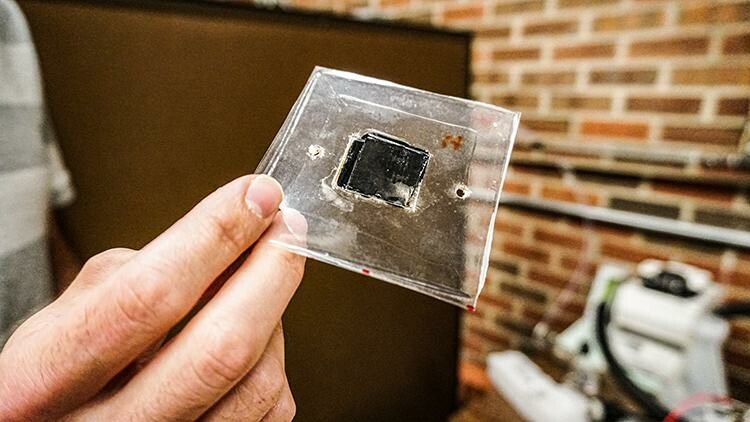 Hydrogen electrolyzer technology is produced in the Secanell to be tested and evaluated, the results of which can help improve the numerical model being produced and refined by Michael and others.

As renewable energy becomes increasingly central to our energy systems, one major hurdle is the inherent intermittency of sources like solar and wind. Fortunately, these issues can be addressed by adequate storage solutions, ensuring power is available when it’s needed, not just when it’s being produced. Energy storage is a broad field, however, with many levels in terms of both quantities of energy stored and the time-scales that storage must serve.

“You can look at it in many ways. We’re looking at utility scale energy storage, meaning very large scale and over a very large period of time,” Michael explains. That could mean storing enough energy to power communities between seasons, for instance storing a city’s worth of solar power generated in the summer for use in the dark winter months.

Unlike hydro- or compressed air storage, hydrogen energy storage is not a thoroughly researched topic. Methods of hydrogen generation exist, but there’s a lot of room for improvement.

“Hydrogen is already a 120 billion dollar industry –– for making fertilizers, for instance. But it’s very carbon intensive to make hydrogen now.” Michael says. The Energy Systems Design Laboratory is conducting research that would make hydrogen production more eco-friendly, beginning with an understanding of the very fundamentals of the process.

Hydrogen electrolyzers are used to catalyse the conversion of water into oxygen, released as a byproduct of the process, and hydrogen, which can then be stored until energy is needed. They rely on a two-chamber set-up, an anode containing water where the oxygen is produced and a cathode where the hydrogen is produced. These two gases must be separated for safety reasons.

The two chambers are separated by a special membrane, a barrier that allows only the flow of protons –– positively charged ions –– but not water. However, the chambers are also connected by a wire allowing the flow of electrons –– negatively charged ions –– towards the cathode, where the electrons and protons can recombine to form hydrogen atoms. Oxygen is released from the anode side where the water molecules are split, and hydrogen can be collected from the cathode for storage.

The traditional method for hydrogen electrolysis is a process called alkaline water electrolysis, relying on an alkaline electrolyte solution. However, Michael, as well as fellow student Manas, are focusing on characterizing and improving the performance of a different technology: polymer electrolyte membrane (PEM) electrolysis.

Getting to the heart of the cell

There are many potential reasons why the field of electrolysis has shifted focus to PEM, both to do with inherent properties and applications in the field. First, it’s very effective at transporting the charged molecules that result from water splitting and because PEM is a solid structure, it shows very high impermeability to gas seepage across the membrane. It can also operate at higher current densities, meaning that more power can be put into the process, allowing for smaller devices to produce more hydrogen. This makes it preferable for renewable energy sources, where sudden increases in wind or sunshine could lead to sudden spikes in the amount of energy being fed into the fuel cell for storage.

“There’s been a ramping up in PEM electrolysis after the early 2000’s but the literature isn’t very developed yet,” Michael explains. Researchers are still trying to understand electrolyzers –– the machinery that runs the electrolysis process –– by establishing basic characteristics and parameters.

“It’s relatively new as a field,” he adds. “Especially the modeling side.”

Numerical modeling is Michael’s specialty, breaking down the hydrogen electrolyzer structure to focus on the most critical area: the layers comprising the membrane electrode assembly at the heart of the cell. He examines it in terms of layers, with the membrane itself in the centre layer, electrochemical reactions happening in the catalyst layers to either side, and transport layers outside of that, bringing in and moving out the molecules in question. 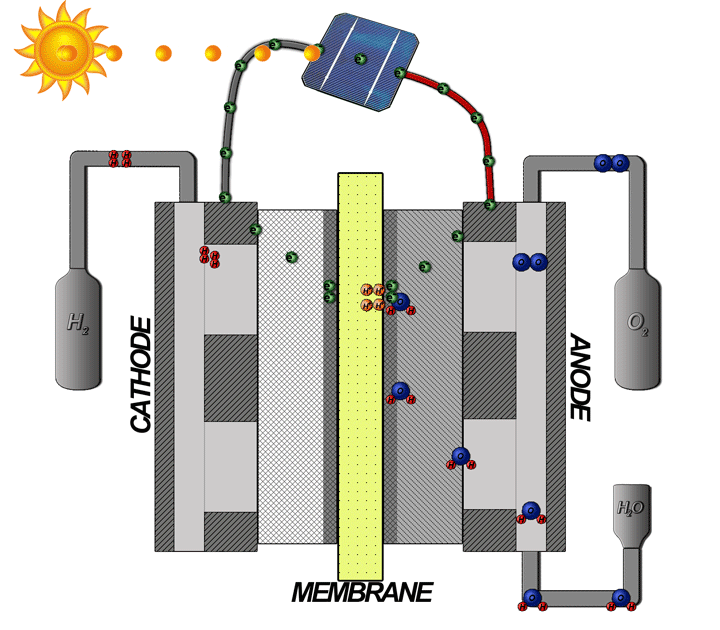 The membrane layer and transport layers he includes in his modeling are around 200 μm thick. For comparison, a human hair can range from 20-180 μm. The catalyst layer, in contrast, is only about 5 μm thick. “There’s lots of chemistry happening in a small space. That makes it really complex,” he says. “We can’t get measurement systems into such a small area, so it’s very hard to monitor.”

Instead of attempting to monitor the reaction, Michael can use modeling to get an idea of what occurs in that reaction layer, thus gaining insights that could help improve the understanding and the technology. But the lack of literature in this area means he can’t draw from a robust set of data when setting up the model –– a huge problem for any modeling project.

“A model is only as good as the parameters that go into it,” he explains. “So in the absence of a lot of literature, we need to gather our own data.” Fellow student Manas, for instance, was the first to measure the conductivity of the catalyst layer they’re analysing. “Even that, it’s such a basic parameter –– there’s not a lot of information out there. Though to be fair, the conductivity is not an easy parameter to measure.”

Manas’ applied work is critical for Michael’s work in refining the model, and his model can help inform Manas of potential changes he should make to his bench-top setup. The overall goal of their work in improving the membrane is to be able to feed a lot of current into the electrolyzer without increasing the voltage, a measure of efficiency for the system.

For now, he and Manas are focusing on testing the current standard materials being used for PEM electrolysers, like iridium. “It’s very rare and expensive,” Michael explains. “So when we find out from Manas that the conductivity is low, I can run simulations and see what the implications of that are.”

Initially, a 5 μm thick layer of iridium was used, but Michael could see that, because of the low conductivity, 4 μm of it were not actually being used. He could then tell Manas to go back and test if a thinner catalyst layer is equally effective.

“We share the work and feed off each other,” Michael says. 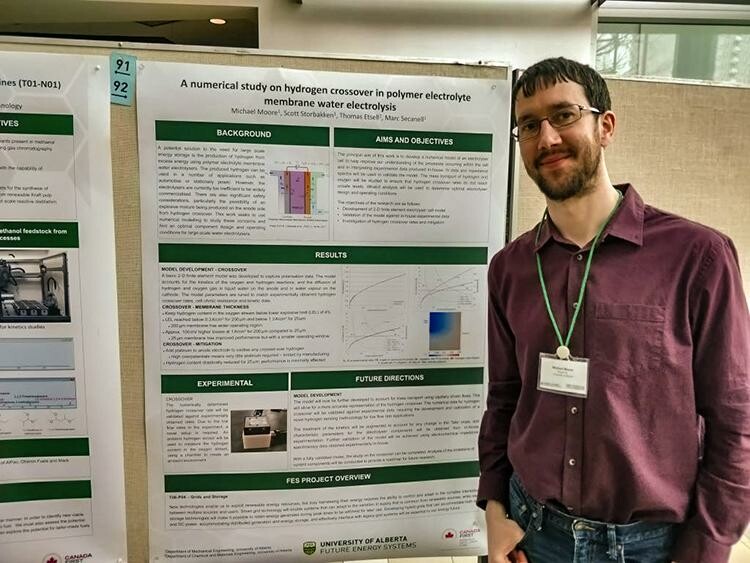 Modeling is becoming increasingly common in the world of research, and many research groups make use of commercially available software and programs. The Secanell group, on the other hand, created their own from scratch.

“Marc’s been working on this for fifteen or more years. We all integrate the code that we write for our own research in a broader framework and keep building onto his initial model,” Michael explains. In his undergraduate engineering degree in his home country of Ireland, he had attained some C++ programming experience, but nothing like what was required to target numerical modeling on this scale.

“When I got here, Marc had to teach me quite a bit,” he says.

Although creating and using an in-house model means a much higher level of complexity, it has real advantages. “It’s more flexible. If we want to test something, we can go in and add it ourselves,” he says. This includes integrating fluid flow equations for the layers around the membrane. “It’s very difficult, but by writing our own code we can formulate the equations specifically for the conditions that exist in fuel cells and electrolyzers, which will make the code more efficient.”

One specific benefit of creating your own modelling tool is that it essentially opens a black box: rather than only having access to the input and output, a simulation can be paused and the numbers computed up to that point can be assessed, which is very helpful when debugging problems. It also allows for the integration of other codes that solve very specific problems into the framework. For example, a code that provides a much more detailed description of the reaction in a fuel cell catalyst layer, which required integrating a mathematical code from colleagues at the University of Saskatchewan.

“It looks like a sandwich, honestly, the layers. We apply a mesh over it, and break it into boxes, solve resistance equations in each box, and chain them all together to have a map of how the electric potential changes from one side to the other.” That degree of specificity allows for the generation of a prediction graph of the current density –– the main way to characterise an electrochemical cell –– based on each individual element in the mesh. In essence, how efficient the cell is, based on the behaviours at the membrane and surrounding layers. 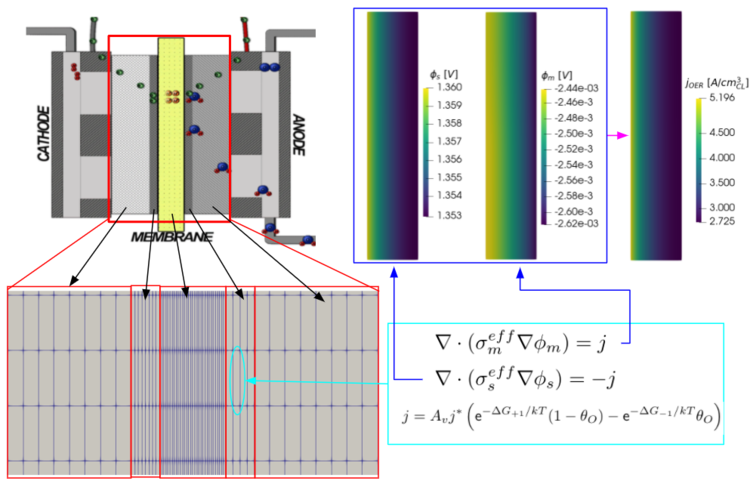 An example of Michael's 'sandwich'. The representation of the model he works on (bottom left), the equations he solves in each grid box (bottom right), and the map it outputs that allows him to assess the efficiency of the electrolyzer (top right). (Graphic: Michael Moore)

For Michael, the road to mastering numerical modeling started in 2010. Marc reached out to Michael after seeing his CV and grad school application, despite Michael’s cited interest in thermodynamics and internal combustion engines.

“He said, forget that, go with fuel cells,” Michael laughs. After defending his Masters in 2012, Michael left for an industry job. It was while working at the systems scale, distinct from the reaction scale numerical modeling he’d been researching, that he began to miss the research he’d left behind. “I realized that I preferred doing the kind of work I had done with Marc. I started again in his lab in 2017, this time for a PhD.”

One thing that drew Michael back was the open-ended nature of the research –– all the questions that need answering and the ability to pursue them with numerical modeling.

“We’re less product-focused than a lot of engineers. Our challenge is to be engineers thinking like scientists –– it’s an applied science approach. We’re trying to understand how things work, and predict them better,” Michael says.

As for the future, Michael is open to returning to industry, though this time with more focus on numerical modeling. “I don’t think I’ll be a professor,” he laughs, “but I also said I’d never do a PhD so I’m clearly not very good at predicting this.” 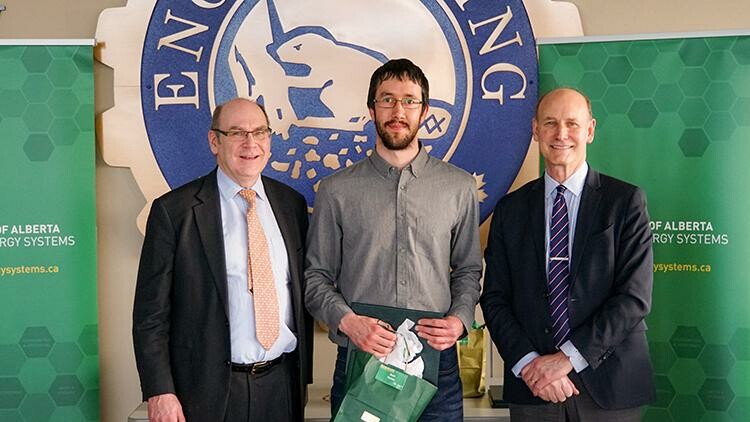