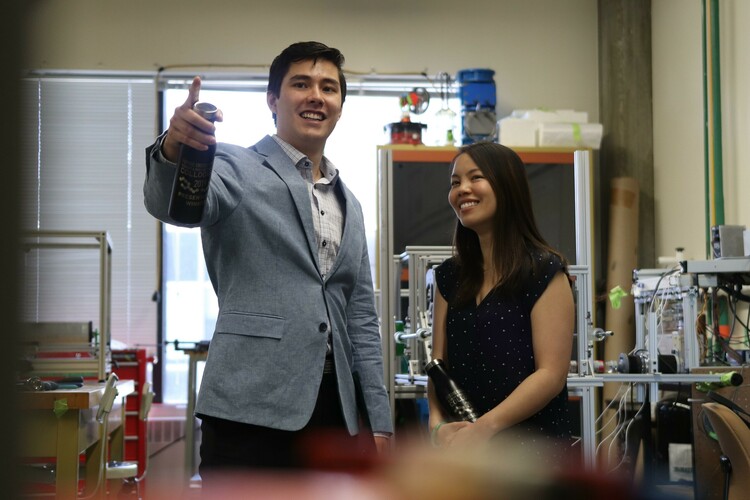 When the prizes were handed out at the Future Energy Systems Colloquium last May, both ‘Best Presentation’ winners –– as selected by an external panel of judges –– were from the geothermal energy research theme. Both talks were rooted in the idea of harnessing the Earth’s warmth to generate energy, but the differences between them seemed stark.

Vivian Giang, a PhD student on the project Socio-Economic Roadmaps to Commercial Geothermal Energy Production in Western Canada, focused on community research with an Indigenous community in Alberta.

Michael Nicol-Seto, a Masters student on the project Optimizing Geothermal Energy Production and Utilization Technology, explained how tweaks to an engine design could theoretically increase its performance.

From anthropology to mechanical engineering, from community-based research to 3D-printing of engines, the work seems as disparate as it is compelling. Such interdisciplinarity is common within Future Energy Systems research themes, and as both Vivian and Michael can attest, the diversity is essential to understanding the vast complexity of the world’s evolving energy systems.

“Knowing about each other’s research helps us be more effective,” Michael says.

“Working together is the best way to contribute to a just energy transition,” Vivian adds.

Engines for the real world

Michael Nicol-Seto had contemplated dentistry before deciding his interest in turning theoretical ideas into functioning technologies was better suited to engineering. The co-op portion of his Mechanical Engineering BSc at the University of Alberta gave him the opportunity to do research and design for a company in the oil and gas sector, but his interest in sustainability led him to Dr. David Nobes’ Dynamic Thermal Energy Conversion Laboratory (DTECL) when he returned for his graduate studies. He now works on low temperature Stirling engine designs.

“The Stirling engine design is nearly 200 years old –– it pre-dates the internal combustion engine,” he explains. “The advantage is it can turn a heat differential into motion, and with motion we can generate electricity.”

The Stirling engines being developed by graduate students in DTECL are unique in the world: while the average car engine requires a temperature differential of hundreds of degrees, these engines can run at differentials of less than 100 degrees. They also don’t require combustion –– heat from any source, from a stream of geothermal water to a decaying nuclear isotope, can be used to create a temperature differential. This fundamental simplicity is why NASA is considering a nuclear variant of a Stirling engine to provide electricity for future long-term missions.

“This technology fell by the wayside when the internal combustion engine took off,” Michael explains. “But now it looks like a possible solution to a number of different niche needs –– we just need to keep improving its efficiency and power to see if it can be viable in real-world applications.”

Last year, students in the DTECL designed and built prototype Stirling engines that successfully run at low temperatures. Michael’s objective is to refine one of their designs –– an in-line gamma-type –– using a non-circular gearing system that should theoretically increase power output.

“They look a bit strange when they’re turning, but our models suggest that modifying the motion can generate additional power from the same temperature differential,” he continues. “Our job is to test the theoretical model in the real world.”

Practicality in the real world is Michael’s ultimate priority. It is a focus Vivian shares.

A real world for solutions 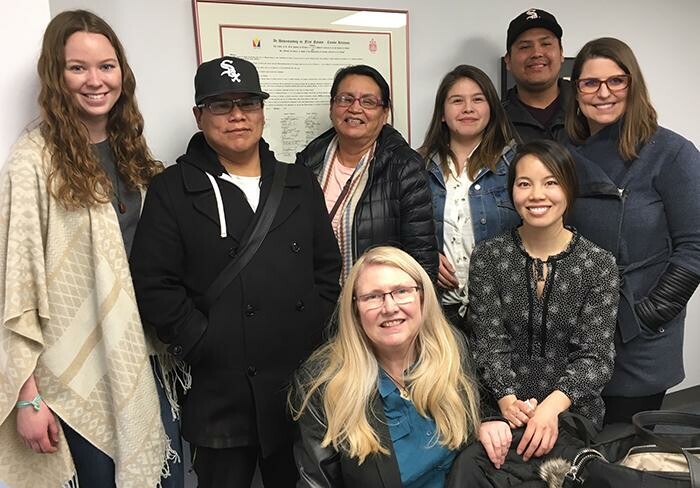 Vivian Giang is a professional communicator by training, with a passion for human rights and justice. Her parents came to Canada among the ‘boat people’ escaping the Vietnam War, and the hospitality they received inspired her to give back. Becoming heavily involved in volunteer roles with the United Nations Association of Canada, she worked extensively with Indigenous communities across Alberta. When she recently embarked upon her Interdisciplinary PhD studies in the Communication and Management of Risk through the Department of Anthropology with Dr. Andie Palmer and Department of Chemical and Materials Engineering with Dr. Lianne Lefsrud, she added an energy focus to that work.

Her research is in partnership with the Alexis Nakota Sioux Nation in the foothills of Alberta’s Rocky Mountains –– a region where a low-temperature geothermal resource might be accessible thanks to the engines being developed by Michael and the DTECL team.

“We are working in partnership with the people of Alexis Nakota Sioux Nation to make sure they have the information they need about the geothermal resource and the technology that could develop it, so they can decide whether it is right for their community and their lands,” she explains.

Sharing this knowledge isn’t simply a matter of providing documents or conducting public information meetings, as is typical of some sorts of energy projects. Instead, Vivian’s team is concerned with understanding how the members of Alexis Nakota Sioux Nation view their environment, the resources within it, and ultimately why they make decisions about opportunities such as renewable energy development.

“We are not involved to try to tell anyone that they must adopt a certain technology. We want to learn from their way of knowing, their way of making decisions related to their land and environment, so that we can provide information that is meaningful to them,” she says.

The experience of exchanging knowledge with Alexis Nakota Sioux Nation about a technical subject like geothermal energy will be valuable for Vivian and her team, and can help researchers better understand how new technologies might be viewed by Indigenous peoples in the real world. That reception might be different than engineers and scientists are accustomed to.

Vivian continues: “For the people of Alexis Nakota Sioux Nation, implementing an energy technology is not simply a calculation about pricing, efficiency, or even emissions targets. They have to understand how that technology will integrate into their relationships with everything around them.”

Relationships between Alexis Nakota Sioux Nation and the non-human members of their community –– the land, water, and other aspects of the environment –– are fundamental to their daily lives.

“Their first question about something like geothermal energy might be ‘what will it do to the water’?” Vivian says. “That is a question about the impact geothermal can have on everything the water touches –– the plants and animals which are central to their way of life, and way of knowing.” 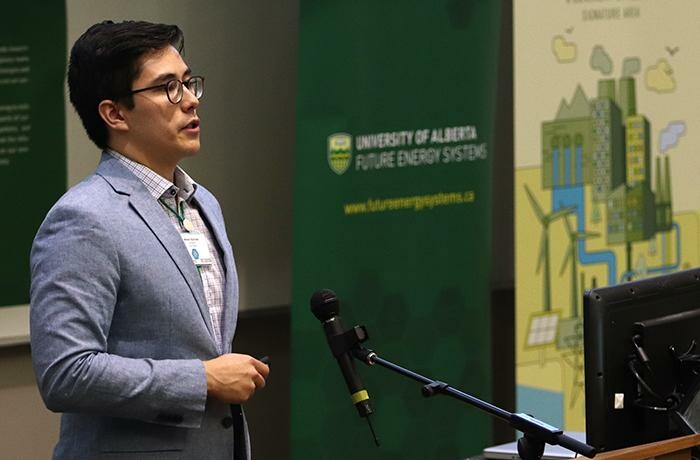 The idea that a technology’s long-term impacts on the surrounding environment be considered in its implementation is simply common sense to Michael. He believes it is the job of an engineer to develop a functional solution that will be acceptable to the people who need it. If the definition of ‘acceptable’ must expand to include different ways of knowing, so be it.

“Engineers solve the problems in front of them, based on the parameters of success they are given,” he explains. “For a long time those parameters didn’t include concerns over carbon emissions, downstream effects, or non-human relationships. Our parameters were more immediate: safety, affordability, and efficiency.”

But the long-term impacts of a technology like the internal combustion engine on the environment are becoming much better understood. For years, engineers have been refining technologies to reduce unwanted outcomes like pollution and carbon emissions, because accounting for those ‘externalized costs’ –– expenses that traditionally have been shouldered by society at large, not the technology’s creator –– has increasingly changed the math for design engineers. The same principles can apply to new energy technologies.

“If we know that reducing the groundwater available to sustain a local ecosystem is a cost that will be more significant than the monetary savings of using that groundwater, we can design a system that may be less efficient but also be less water-intensive,” he explains. “If the trade-off is acceptable for the end user, then we’ve succeeded.”

Because many new renewable energy technologies are still in the early stages of their development, Michael sees an opportunity to rethink the parameters that will define their success.

“We’re generally concerned about cost, efficiency, and carbon reduction right now,” he says. “But the future of energy looks very decentralized, and that means we can engineer custom solutions that fit specific sets of needs.”

In his estimation, a low temperature Stirling engine could be adapted to generate electricity from previously untapped sources like the heat captured at a mill, re-imagined into a low-energy refrigeration solution, or customized to ensure no impacts on non-human relationships. Each solution would meet the needs of the people who use it, while contributing to the broader environmental goal of reducing carbon emissions.

“I think this is how many new technologies will come to market,” he elaborates. “You identify a niche and engineer a solution to fit it. What you learn helps improve the technology so you can adapt it for a different situation. We got the internal combustion engine this way. Thanks to advanced modelling and additive manufacturing, we just have the ability to go through the process more quickly today.”

Choosing moves for the future 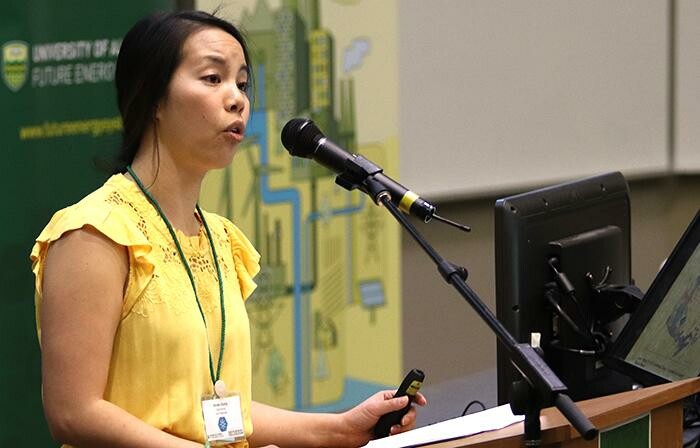 With the accelerated pace of research and development for new technologies, Alexis Nakota Sioux Nation can look forward to a variety of different potential energy solutions in the years ahead. That’s why the community is putting a significant emphasis on learning and partnerships.

“There is a huge focus on education for the children and youth of the community,” Vivian explains says. “The elders of the community want to make certain that, as these new technologies become available, the next generation of leaders have a deep understanding of them.”

Thanks to research like Vivian’s, that understanding will travel in both directions. While more information about groundbreaking renewable energy science and engineering projects makes its way to Alexis Nakota Sioux Nation, her experiences working with the people of that community will help engineers like Michael better understand what questions to ask and how best to share knowledge with people working from a different system of knowledge.

Michael concludes: “We’re all moving pieces around within the laws of physics to solve problems. Different ways of knowing help us find different sorts of moves to make.”

Vivian concurs: “We benefit so much from taking these steps to understand each other.”