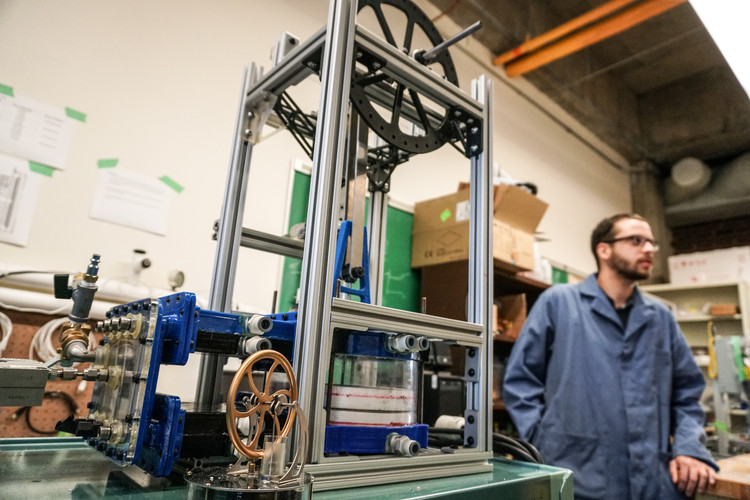 When Larry Kostiuk talks about the future of energy, he doesn’t have to look too far ahead.

“Fifteen years ago, the iPhone was future technology. That’s the sort of timeframe separating us from technologies that will enable a low-carbon energy economy,” he explains.

“Future Energy Systems was created to help us bridge the gap.”

Funding for the University of Alberta’s seven-year, $75-million Future Energy Systems research initiative was announced on September 6, 2016. Twelve months later, more than forty projects have been launched involving six of the university’s faculties and two of its campuses.

Some of these projects are being conducted with national and international partners including the University of Calgary, NAIT, the Fraunhofer Institute, industry, and various levels of government. The program will also play a central role in UAlberta's partnership with Tsinghua University through the Joint Research Centre for Future Energy and Environment.

In his role as Future Energy Systems’ Director, Kostiuk worked with a research advisory committee to define the program’s fourteen themes, and to ensure its work meets the expectations of the Canada First Research Excellence Fund (CFREF) –– the Tri-Council program which provided and administers the grant.

Through multidisciplinary research, Future Energy Systems will examine and develop a variety of new energy technologies, consider how they can be connected to our existing infrastructure, and explore their social, economic, and environmental impacts. The initiative will also contribute to the development of solutions for challenges presented by current and future energy systems.

“It’s unlikely that any single technology will define our energy future,” Kostiuk says. “For example, our current electrical system relies on large-scale generation and distribution through vast grids across long distances. Renewable technologies and micro-grids could fundamentally change that paradigm and the way our society interacts with energy.”

New methods for energy interaction have historically led to significant changes in human society. Harnessing fire provided security, enabled people to work after dark, and to survive in colder climates. The advent of the water wheel drew settlement to streams, rivers, and rural settings, while accessing the energy in coal led to industrialization and the rise of cities. These evolutions were accompanied by wide-ranging social and economic changes, and the systems being investigated by Future Energy Systems have the potential to trigger similar, long-term shifts.

The program considers renewable energy technologies –– wind, solar, biomass and geothermal –– while exploring ways to link these sources to existing infrastructure and examining storage options. Researchers are also investigating current hydrocarbon technologies, seeking both to reduce their carbon footprints and to reverse their historical impacts on the environment.

This breadth is possible because of the University of Alberta’s robust research capacity. Ranked among the top 100 universities in the world, and the top five in Canada, UAlberta has some 211 faculty members working in the energy space. Over its life, Future Energy Systems aims to support more than 100 of these researchers, and as many as 1,000 graduate students and post-doctoral fellows.

“We launch long-term projects that bring together energy-focused social scientists, engineers, scientists, economists, humanities scholars, and more,” Kostiuk points out. “This creates unique opportunities for our researchers and graduate students.”

Projects within Future Energy Systems are highly diverse. While mechanical engineers design and 3D-print new ultra-low temperature differential engines for geothermal power, humanities scholars imagine how society might transform with the rise of widespread renewable energy. While scientists use machine learning to identify new materials that might serve as cost-effective catalysts in solar cells, economists examine potential policy frameworks that could make renewable energy viable in the Alberta marketplace.

Kostiuk finds that this diversity generates enthusiasm: “As researchers we often have to wait until we publish or present papers for that information to be shared, and still longer for it to affect a larger circle of researchers outside our own specialization. The structure here is to have interdisciplinary teams that share relevant information at a very early stage so they can inform each other’s work.”

Expanding circles and building partnerships takes time and resources, and because Future Energy Systems’ funding comes from a new federal program with unique management and reporting requirements, administrative processes had to be developed from scratch at the University of Alberta.

“We made promises to the government, and those promises are being kept,” Kostiuk states. “We needed to get a significant amount of research moving within a year, and we succeeded. Our next step is to engage even more University of Alberta faculty members and students for new research projects that help meet our CFREF obligations.”

Information will be shared with the University of Alberta community as new research and collaboration opportunities become available. Updates on existing Future Energy Systems projects will also be communicated, though many researchers are just welcoming the first generation of Future Energy Systems’ graduate students to campus this month.

In the years ahead these students will gain knowledge and experience that prepares them for careers in a new, low-carbon energy economy, and their work will contribute to the University of Alberta’s mission to conduct research for the public good.

“Our researchers and their students are getting started, and there’s much more new research to come,” Kostiuk concludes. “Stay tuned –– this is just the beginning.”