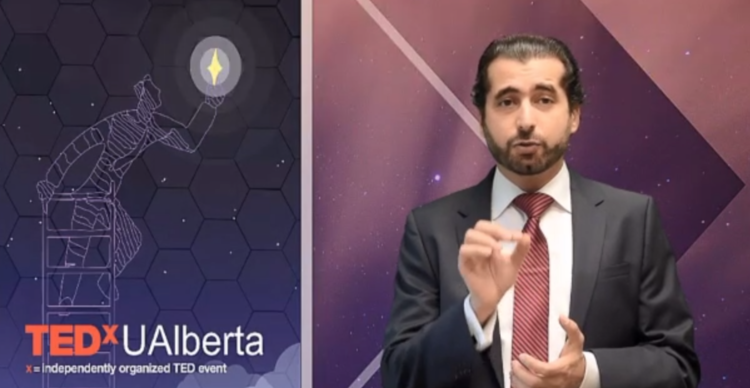 When Arman Hemmati was an observer at the United Nations Framework Convention on Climate Change in 2015, he was astonished and disappointed by some of the things he encountered: politicians from around the world seeking to shift blame for climate change; efforts to shift the burden of mitigation and transition to others; good questions being raised, but few realistic, science-based solutions being proposed.

As an Assistant Professor of mechanical engineering who works on both renewable and conventional energy technologies, Arman is deeply familiar with the challenges inherent in addressing the climate impacts of our society’s dependence on energy. He knows it is a complex problem –– one that can only be solved by a global innovation effort. Unfortunately, he finds advocates on all sides of the issue often avoid the true complexity with the problem, prioritizing rhetoric over reality.

On Saturday, as one of five presenters in TEDx UAlberta’s Up All Night digital conference, Arman explained what he believes is necessary for humanity to win the battle against climate change. The first step: an end to the blame game.

“Answering the question 'who did it?’ has never been a unifying approach,” he said. “There is only one approach I can recommend: finding a common ground amongst all our people.”

He went on to stress the importance of electing leaders who understand and engage with the complexities of climate change –– not those who dismiss it as a conspiracy theory, or who discuss it at length but fail to take action. He cautioned against polarization, and the idea that one must only be ‘for the economy’ or ‘for the environment’. He suggested new ways of addressing climate issues, such as transferring technology to impoverished countries to reduce their emissions, while improving quality of life for their people. Ultimately, he called for a new approach to innovation, starting from what is scientifically possible as opposed to what is rhetorically favourable.

In a year which has not been short of tragedies and distractions, focus on our planetary climate has sometimes appeared to take a backseat to other headlines, or worse, has been twisted into an ideological debate rather than a fact-based discussion.

From the beginning of his talk, Arman pointed out that no one can be told what global problem is most important –– that in democracy, everyone has the right to decide for themselves. He hopes that humanity can band together to address climate change as it is tackling the COVID-19 pandemic, with innovative thinking beyond any that came before. He believes such innovation will be critical for our society’s victory against climate change.

His message was well-suited to the Up All Night TEDx UAlberta event, which like so many events in the midst of the pandemic, was being delivered online for the first time. An independently organized off-shoot of the massively popular TED Talks series of conferences, the event also featured Jasneet Parmar, Associate Professor in the Department of Family Medicine; Randall Morck, Professor in the Alberta School of Business; Randy Boissonnault, former MP for Edmonton Centre; and Sandra Bucerius, Associate Professor in the Department of Sociology.

To learn more about Arman’s research and his past experiences with international climate change, check out this feature profile.