Carbon emissions are on the rise, and so are the global climate change consequences.  A transition to a zero carbon economy is the ultimate goal, and Future Energy Systems Principal Investigator Arvind Rajendran is one of the researchers who will help buy us enough time to get there. His specialty is finding new carbon capture materials to reduce the impact of our current, carbon-emitting energy systems.

Last week, he shared some of his research team’s innovations with a sold-out crowd during an Energy Talks online lecture, hosted by Edmonton Public Library. Registration reached capacity days before the event, but the full presentation is available now on the FES YouTube channel. It is embedded below.

Arvind spent the evening outlining the complexities of greenhouse gas emissions before moving into a discussion of carbon capture material research and then answering questions from an enthusiastic audience. First, he explained where emissions come from –– and why it matters.

“For the rest of it to make sense, we need to be on the same page that climate change is real, and is caused at least in part by human activities,” he began. “Energy, industry, and transportation –– these are some of the biggest contributors to the global carbon dioxide budget, so these are areas that we need to focus on to reduce emissions.”

Getting to zero emissions is the world’s overall goal, but getting there won’t be simple. Even after a total shift to non-emitting processes for most of society, some processes will necessitate emission of greenhouse gases, like production of certain products we rely on, like the concrete. These emissions must be balanced by carbon capture.

“In the longview, we’ll be looking at processes that actually consume CO2, and that will contribute to the net zero budget,” he explained. Carbon capture can be tailored to attach to many of those emissions-producing industries, preventing greenhouse gases from reaching the atmosphere.

“As for what happens to the captured carbon dioxide, that can vary,” he said. “Long-term storage, like injection into the ground is possible.” He pointed out that, as an example, Edmonton is very close to the Shell Quest carbon capture and storage facility, successfully storing carbon dioxide 2 km underground since 2015.

“Another possibility is utilizing that carbon for other processes,” he continued. “Enhanced oil recovery is an example, where the carbon is used to help extract oil out of reservoirs.” 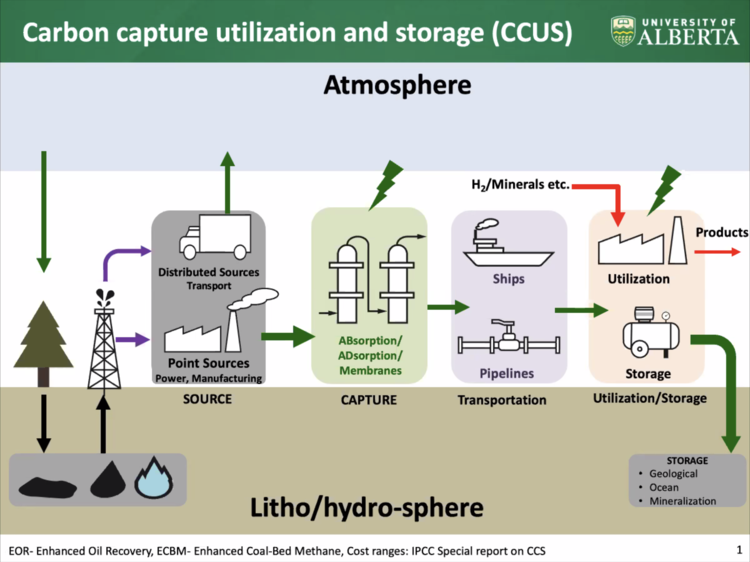 An overview of a potential carbon capture system explored in Arvind's talk.

While both endpoints –– storage or utilization –– have benefits and drawbacks, either can remove an important amount of CO2 from the atmosphere. And that’s the key endpoint.

“There’s no ‘silver bullet’ technology that will save us, but carbon capture is an option to achieve negative emissions, which we’ll need,” he stressed.

“We look at more than just the singular, isolated molecule. It’s about the larger material behaviour, and the process it fits in,” he said.

Keeping these considerations in mind can contribute to more efficient carbon capture technologies, but optimizing for them has traditionally been a slow, tedious process. That’s where machine learning enters the equation. A type of artificial intelligence that centres on teaching computers to recognize and predict patterns based on a set of known inputs and outcomes, creating algorithms and tools suited to identifying promising carbon capture materials is becoming a specialty of Arvind’s lab. You can read more about that groundbreaking research by clicking here.

But no matter how successful Arvind and his team are in helping optimize new carbon capture processes, he emphasized that we should see carbon capture and storage as a transitional technology.

On carbon dioxide emissions he offered an emphatic conclusion: “Just because we can push it under the ground doesn't mean we should keep producing more.”

This talk was a part of the Energy Talks series of seminars, hosted by the Edmonton Public Library. To view this and other Energy Talks lectures, click here.

Join us for the next talk on 30 September, 2020, when Future Energy Systems Principal Investigator Dominic Sauvageau delivers his lecture, “How bacteria can reduce greenhouse gas emissions and lead to more sustainable energy”. Register here!