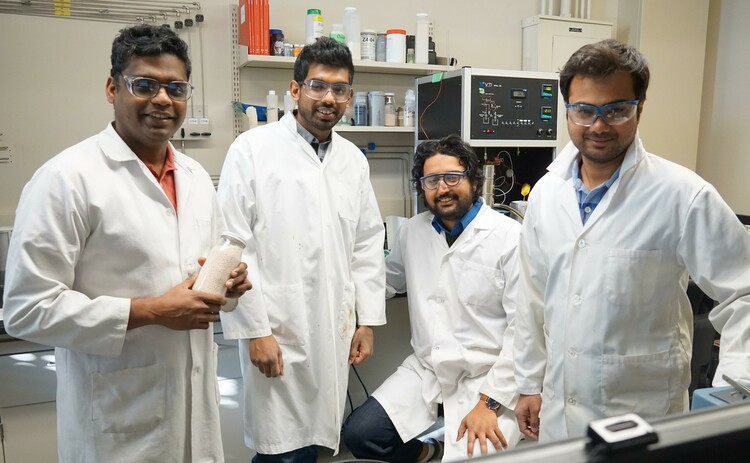 Imagine a future where the carbon dioxide we produce is immediately captured before it can be released. It could then be stored safely out of the atmosphere, used for other purposes as-is, or transformed into other forms that add value. This isn’t science fiction, or even a distant possibility; current advances in the research of carbon capture materials are promising a greener, brighter future.

According to the International Energy Agency, capturing carbon from major power generation systems will be essential to meeting the IPCC goal of limiting global temperature increases to 1.5 degrees, and giving society the time needed to bridge to more renewable sources. But how long will it take to put carbon capture technologies into the field?

Future Energy Systems researcher Arvind Rajendran and the members of his engineering lab at the University of Alberta –– including recent Masters graduate Vishal Subramanian Balashankar and graduate students Kasturi Nagesh Pai and Gokul Subraveti –– believe that a critical bottleneck is a lack of tools to help researchers streamline and accelerate their work. These advances can help overcome the main barrier to the widespread implementation of carbon capture technologies: cost.

“Carbon capture, in many jurisdictions, is more expensive than the price –– including tax –– of CO2,” Arvind explains. “We need to get the cost down so it becomes the better, more economical option, and is therefore widely adopted.”

New materials will improve carbon capture - but which?

“We need better materials, and for that we need a faster method for finding them,” Arvind continues. The task isn’t made any easier by the number of materials that can theoretically be used. Zeolites, the traditional standard carbon capture materials, number in the hundreds of thousands, and they’re far from the only potential option.

Currently, a new material type is emerging as a superstar in the field of carbon capture. Metallo-organic frameworks, or MOFs, consist of metal nodes joined by carbon -- organic -- linkers. Both the nodes and linkers can be swapped in and out to customize the structure, changing the behaviour of the molecule. Theoretically, millions of combinations within this family of structures are possible. This tunability option, a possible showstopper, is the focus of many research groups aiming to improve carbon capture technology.

“MOFs can be tailor-made to better suit their purpose,” Arvind explains. “They also have incredible surface areas, far higher than Zeolites. That means more surface area for the carbon to be adsorbed –– or captured.”

The problem? Research into MOFs is nascent, and little work has been done to see how effectively they capture carbon, and how they behave under high temperature or around moisture. Work is now underway around the world, but for it to make a difference in the battle against climate change, progress needs to happen fast.

Rajendran believes that new tools created by his team can speed the process of material identification.

Though there wasn’t much data about how MOFs could work in carbon capture processes, their potential caught Nagesh’s interest when he began his work at the University of Alberta. The work already done on them for other uses showed highly promising characteristics, and those properties had been compiled by the scientific community in a database called CoRE MOF.

“These are not just theoretical molecules, they have been synthesized and tested,” he explains. “Unfortunately, when they were tested in other labs, many of them weren’t targeted for carbon capture, so those properties weren’t explored.”

In order to make this possible Rajendran’s group teamed up with Tom Woo, a theoretical chemist at the University of Ottawa. Woo’s group developed molecular modeling tools that were able to predict how CO2 and N2 would adsorb on the surface of thousands of these MOFs. While these properties are critical, they do not fully reveal how well these materials can perform in a real world process. For this the team meticulously scanned thousands of operating scenarios for each MOF in order to understand the conditions that will maximize the material’s performance.

Through meticulous work, the team whittled down 1,632 MOF structures to 365 MOFs, each of which appeared capable of meeting the US Department of Energy standards for carbon capture (95% CO2 purity and 90% CO2 recovery) in processes that used less energy than the competing solvent-based capture technology. 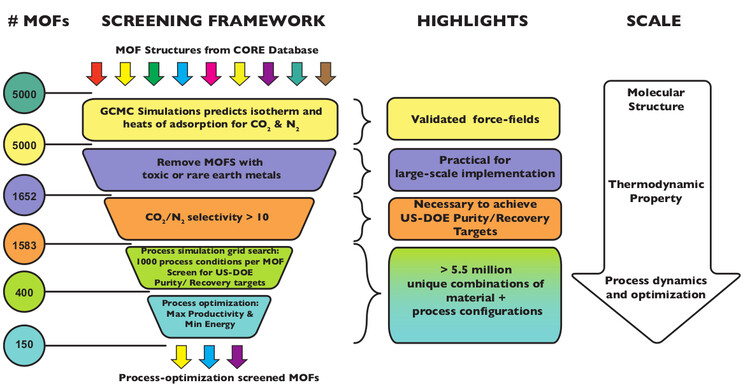 Simplified screening process for MOFs developed by Arvind's team, including Nagesh, and their collaborators.

However, the goal wasn’t simply to find a menu of molecules; they wanted to use their findings to construct a tool that would make future identification even easier.

“Before this work, there were twenty-nine material properties that are used as indicators that they’d be good at capturing carbon,” Nagesh explains. “In fact, none of them were good predictors of which MOFs are best in that sense.”

Building a tool that could identify more relevant properties, and then comb through the millions of potential MOF structures to find ones better optimized for adhering to CO2, could do more to speed the refinement of capture technology than any 365 molecules simulated in a lab.

“That’s how we can accelerate future work,” Arvind explains. “We teach computers to look for the properties we need, and suggest others that we haven’t imagined yet.”

The traditional method of materials discovery and analysis –– which Nagesh followed to get to the 365 MOFs –– has always been reliable, showing a high degree of accuracy in the predictions. The problem –– which he experienced –– was the time and computing power required to sort through relatively modest numbers of molecules.

The alternative was machine learning, a rapidly growing subset of artificial intelligence where algorithms and statistical models are used to train computers to identify patterns of outcomes based on existing data sets or situations. Arvind’s lab has recent and highly-impactful experience with this methodology: in the past few months, both Vishal and Gokul published about new methods using algorithms to find better zeolites for carbon capture.

Vishal created and tested a new methodology for preliminary simplified analysis that sifted through large numbers of candidate molecules, identifying those that should be subject to more detailed study. In this way, he screened almost 120,000 zeolites for carbon capture suitability, cutting that pool down to just 7,000 materials which could then be examined in greater depth.

“We took a process that would have required tens of thousands of hours, and turned it into days. From that smaller pool, we knew we’d have a better chance of finding something that would work,” he explained at the time.

In a fraction of the time that would have been typically required, his method allowed the team to identify a material, zeolite-13x, that was 17 percent more efficient than the industry standard –– work that was published in ACS Sustainable Chemistry & Engineering.

Gokul took the work further, designing a machine learning algorithm that would allow a computer to predict –– sight unseen –– whether a material will yield an improvement on carbon capture efficiency. After being trained on the known carbon capture properties of zeolites, this tool was able to accurately identify zeolites with strong potential, without requiring intensive simulation modelling.

“Doing this cuts the computer processing required by a factor of twenty,” Gokul said at the time. The advancements, accomplished in collaboration with FES researchers Vinay Prasad and Zukui Li, would allow the testing of many more zeolites than would have been otherwise possible. It was published in Industrial & Engineering Chemistry Research.

On the strength of this pioneering work, Gokul was subsequently accepted to visit and research at SINTEF in Norway –– a world leader in carbon capture. Meanwhile, Nagesh is using the same methods to create equally exciting progress for MOFs.

The tools that Vishal, Gokul, and Nagesh are creating are powerful contributions to the field of carbon capture materials. They’ve demonstrated their time-saving qualities, and shown that computing the potential of a material doesn’t need to rely on such computationally-intensive traditional measures. But the generation of these tools was only the first step.

“We have these outcomes and we need to prove that they’re trustworthy,” Nagesh explains. “We looked at validation in two ways: the first is taking some of the good candidates identified by the machine learning protocol and running them through the traditional modeling-based approach. The other is testing it in a lab –– actually getting physical results to compare to our tool’s output.”

Nagesh has thus focused on experimentally validating the outputs of the models generated in the group with laborious lab-work and measurements. His work is yielding good news: the machine learning tool is accurately predicting not only carbon capture outcomes, but other factors or steps in the process. This level of accuracy will save future researchers time, as they won’t have to spend as much time double-checking results when they use the identification tool.

Recently published in Separation and Purification Technology, the validation means that the group has successfully developed a tool that can potentially reduce the time it will take for carbon capture technology to become viable by an order of magnitude.

But the work didn’t stop there for Nagesh, whose focus on MOFs led him to develop his own machine learning protocol for these promising materials, taking advantage of the ground laid by his traditional assessment of over 1600 of these molecules.

Using the results of his painstaking process simulations, and having identified which metrics are better predictors of carbon capture capability, Nagesh has created a machine learning model that is 91 percent accurate in predicting a theoretical MOF’s ability to meet that US DoE standard for carbon capture. This work, paired with his ‘brute-force’, database-mining analysis, has been recently published in Environmental Science & Technology.

“This is the role we can play, as engineers,” Arvind says of his team’s work. “We support the chemists and the process engineers by making it easier for them to do their work.”

And while carbon capture is the current focus of his lab’s efforts, he believes that future work could lead in many different directions. His team’s next target: methane upgrading and oxygen purification projects. But those won’t be the end.

“Carbon dioxide is one the critical problems of our time,” he concludes. “We must stop emissions, we must address climate change. But the tools we are building here can be adapted for any molecule. We are learning how to make the right tool for a variety of challenges.”