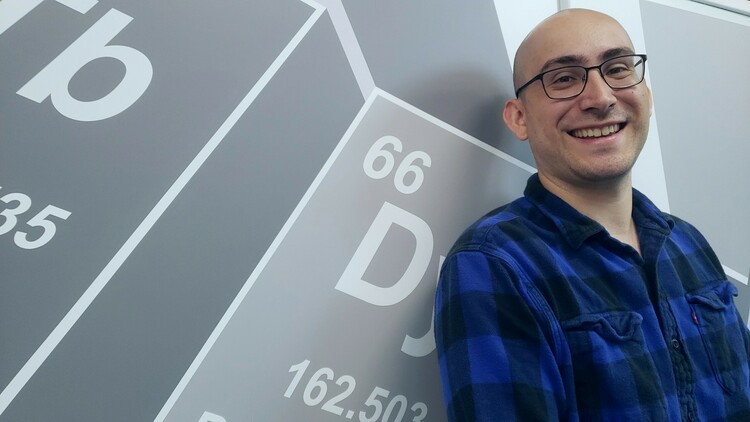 Using machine learning, Alexander Gzyl developed a way to dramatically speed up the process of discovering new materials that can harvest electricity from heat generated by sources ranging from the human body to large-scale solar or geothermal operations.

In any form of energy conversion — even with something as green as solar panels — extra heat is generated. But with up to 72 per cent of it left unused, there’s also great potential to harvest electricity from that waste.

A University of Alberta researcher has successfully developed a way to figure out the chemistry behind that process.

The finding could ultimately help speed up development of thermoelectric materials — products that, if attached to something like a solar panel system, can recover waste heat that can then be used to generate electrical current.

Using two machine learning models he developed, Alexander Gzyl has been able to narrow down the chemical makeup of a group of alloys that could be used to create those materials.

Thermoelectric materials can be used to harness energy from personal electronic devices like cellphones or computer servers, recover heat generated from combustion, use body heat to power devices like pacemakers and improve efficiency of alternative energy sources like geothermal and solar.

“If we are able to turn the heat into something usable like electricity, we can make improvements to energy efficiency on a global scale,” noted Gzyl, who conducted the research to earn his master’s degree in the Faculty of Science. His work is also part of Future Energy Systems, a cross-disciplinary research and teaching network at the U of A working to develop innovations for energy transition.

The materials that Gzyl worked with, called half-Heusler alloys, are proving successful in the field because of their stability, mechanical strength and efficiency. But they still pose a challenge due to their specific chemical makeup.

Gzyl needed to pin down the correct crystal structure to be able to calculate the properties that determine the theoretical efficiency of a given thermoelectric material.

By developing two computer algorithms, he was able to screen more than 300,000 simulation possibilities and narrow the field to just 103 candidates. That resulted in a list of new half-Heusler compounds and a way to determine their correct arrangement “in a matter of seconds,” he said.

That knowledge can be used to calculate the thermoelectric properties in particular compounds to decide whether they’re good candidates for prototyping devices, with substantial savings of time and resources.

“Normally it could take up to 10 years to discover some new material,” Gzyl said, noting it’s only been within the last decade that thermoelectric materials have been efficient enough to commercialize, due to the lengthy time needed to conduct the research.

“Machine learning really streamlines that approach, and in this case we were able to test it out, take it beyond the theory into the real world, and it works.”

Gzyl’s work helps advance the field of thermoelectric materials, which are already being used by major entities such as NASA and BMW, said U of A professor Arthur Mar, whose lab in the Department of Chemistry hosted Gzyl’s research.

“The main challenge is to improve the efficiencies for generating electrical energy, and many scientists have been working hard to do this by synthesizing and testing new materials,” Mar said. “Alex's work has helped accelerate this discovery process.”

Gzyl’s research was funded by Future Energy Systems and the Natural Sciences and Engineering Research Council of Canada.