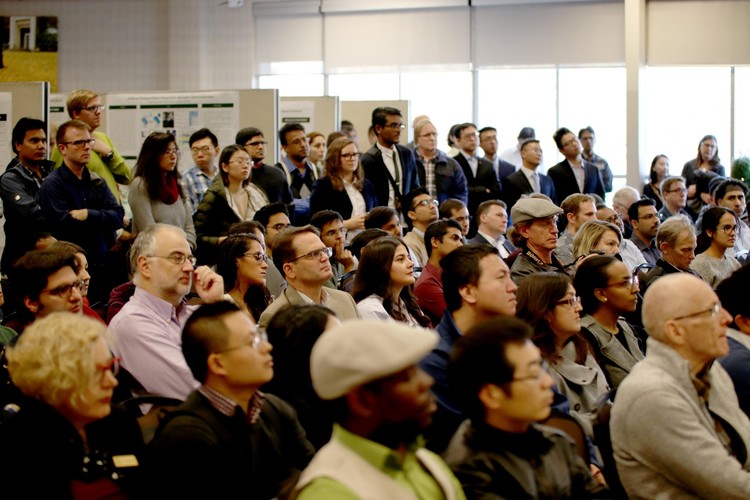 Breaking down the barriers between disciplines was the theme of the second annual Future Energy Systems Open House. More than 500 people passed through the doors of Lister Centre yesterday to view 107 posters representing the University of Alberta's largest-ever research initiative.

Four separate rooms of posters were required to accommodate the breadth of the program, each representing one of Future Energy Systems' research areas: Developing Hydrocarbons Responsibly, Improving Environmental Performance, Enabling Sustainability, and System Wide Enablers. Researchers, graduate students, and post-doctoral fellows were encouraged to travel between the spaces to learn about the different aspects of humanity's energy transition. Microbiologists crossed paths with chemists, mechanical engineers with economists, sociologists with geophysicists.

After an introduction from Associate Vice-President (Research) Walter Dixon, Director Anne Naeth spoke to the standing-room-only crowd about a year of successful energy research and collaboration. She announced upcoming new initiatives designed to empower students to expand their horizons, such as a job shadowing program that will place graduate students and post-doctoral fellows into unfamiliar labs for a day to learn how different research teams operate. She also emphasized the truly world-leading nature of Future Energy Systems research -- a point she will be reiterating when she visits international research partners in China and Germany in the coming months.

Future Energy Systems will continue to undertake research that seeks to enable humanity's energy transition. To stay up to date, subscribe for our newsletter.