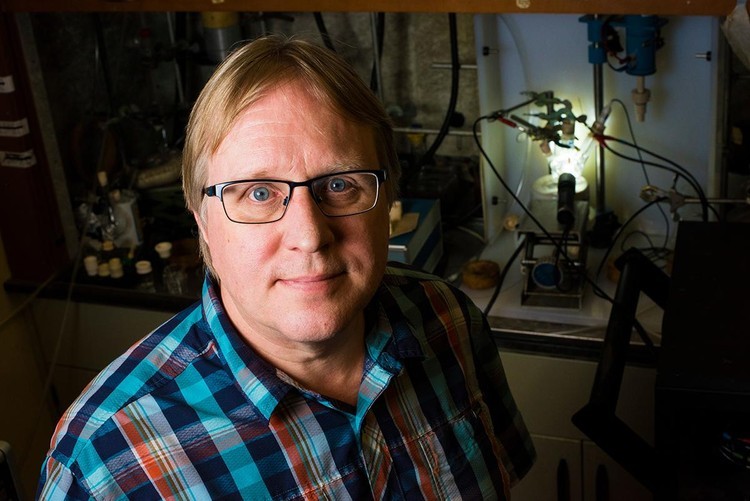 UAlberta chemist on the hunt for new and innovative fuels

Chemist Steven Bergens is looking for ways to make fuels more than just efficient. He wants to take their carbon footprint to nearly zero—all with the help of a seemingly simple chemistry equation.

“The idea is to take something we’re largely just throwing away—carbon dioxide—and create something useful and valuable—like fuels and chemical building blocks,” explained Bergens, professor in the University of Alberta’s Department of Chemistry.

“Specifically, we hope to combine carbon dioxide, water, and sunlight to create liquid fuels, carbon monoxide, or methane. Using fuels and products made from carbon dioxide, sunlight, and water would dramatically reduce the total amount of carbon dioxide released into the atmosphere.”

“In all my years as a researcher, I’ve rarely seen the framework and funding to support this kind of opportunity for research and collaboration.” —Steven Bergens

Alberta’s economy is heavily dependent on hydrogen. Used in both the refinement of crude oil and the development of fertilizer, hydrogen is a critical component in numerous industries across the province and the country.

In the energy industry, steam reforming methane or other carbon sources is the cheapest way to prepare hydrogen. For example, by reacting natural gas (which is largely methane) with water, hydrogen and carbon dioxide are produced. The hydrogen is captured for use in oil refinement, while the carbon dioxide is released into the atmosphere, contributing to the greenhouse effect. But what if the carbon dioxide was captured and made into something useful using solar energy and water?

“Our job is to develop efficient, inexpensive catalysts that are connected to solar energy collectors that make these chemical reactions possible,” said Bergens. “As a research group, we’ve already developed several new exciting systems for these reactions. A key component of this research is collaborating with others.”

And doing so starts with a full-systems approach, in this case, a University of Alberta-grown initiative that connects 100 researchers under the Future Energy Systems initiative.

“In all my years as a researcher, I’ve rarely seen the framework and funding to support this kind of opportunity for research and collaboration,” said Bergens. “We’ve only just started, but the potential is real and the excitement is palpable.”