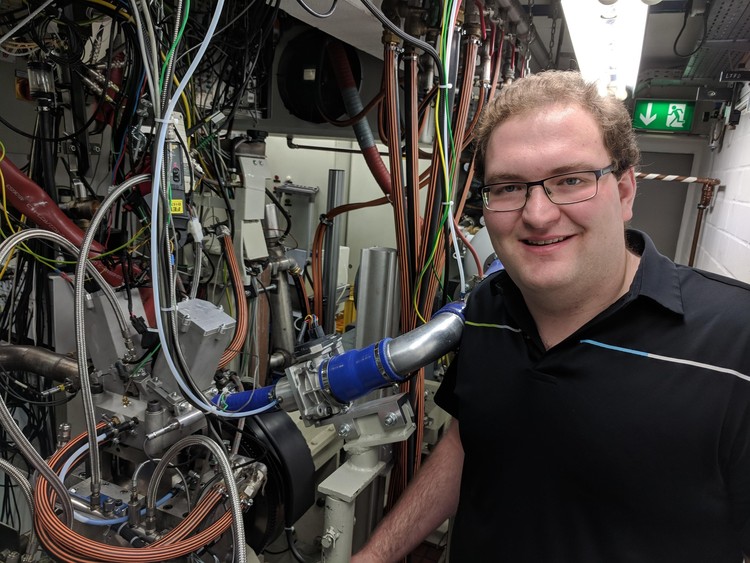 Future Energy Systems HQP David Gordon in his lab at the Institute for Combustion Engines at RWTH Aachen, Germany.

David Gordon may be spending his weekend in the lab.

It’s Friday, and after spending a few weeks swapping out components at his testbench at RWTH Aachen University he thinks he’s finally gotten some kinks out of the system. That means he can get back to collecting data –– and he has plenty of that to do in his final few months in Germany.

Gordon is a University of Alberta Master’s student working on the Future Energy Systems project Control of CI Engines for Efficient and Robust Biomass Utilization with Dr. Bob Koch. He’s also the first Future Energy Systems HQP to participate in a year-long international exchange, and his experience has been formative.

When he was wrapping up his undergraduate engineering degree at the University of Alberta, Gordon had been unsure whether he wanted to get his foot in the door with an industry job or continue with more schooling. The chance to do research at the cutting edge of engine control ultimately convinced him to stay at the U of A, and when Future Energy Systems launched he joined Koch’s project.

A few months later, that project sent him to Europe to work in one of the world’s leading combustion labs at the Institute for Combustion Engines at RWTH Aachen, and thanks to the experience and contacts he’s gained there he thinks he might continue in academia for at least a little longer.

“There isn’t a lot of experience in Canada with using FPGA systems for engine control,” he says. “I like the idea of bringing that knowledge back home, and helping Dr. Koch incorporate it into his program at the U of A.”

That knowledge could prove highly valuable for generations of future students, because the world of engines is becoming vastly more complicated.

“Diesel engines and gasoline engines use different methods to ignite their fuel,” he explains. “Diesels compress fresh air in an engine’s cylinder so that when fuel is injected the heat and pressure cause it to ignite. Gasoline engines mix air with fuel first, then ignite it with spark.”

That spark makes all the difference: instead of all the fuel burning simultaneously because of the compression, the gasoline engine’s spark causes a flame front to burn through each engine cylinder like a wave, causing the temperature to shoot up. The resulting heat produces serious pollutants called nitrogen oxides (NOx).

Though a lot of focus is placed on carbon dioxide emissions, NOx is being increasingly regulated by governments around the world. The recent scandal involving Volkswagen emissions was caused by the misreporting of NOx emissions.

“Right now if you want to reduce NOx, you need to use expensive gas aftertreatment systems,” Gordon explains. “It’s also possible to reduce NOx by running a cooler combustion like diesel engines at low loads, but that will produce a different pollutant –– soot.”

Gordon’s current research focuses on a method that produces very low NOx and soot emissions: Homogenous Charge Compression Ignition (HCCI) uses compression to ignite gasoline. Unfortunately, this system is hit-or-miss –– depending on the mix of fuel and air in a cylinder, the instant the fuel compresses to its ignition point can change from cycle to cycle, thousands of times per minute.

The lack of direct ignition control has so far made it difficult for engines to run reliably with this method, but control systems like the one Gordon is working on could make the difference.

“By monitoring the fuel mix in real time and modifying the reaction by either injecting water or adding a spark, we can make it more stable and extend the operating range,” he says.

If the system becomes stable enough, HCCI engines could be commercially viable, leading to a massive decline in NOx and soot emissions.

That point leads to an important question: with the worldwide focus on CO2 emissions, why is a Master’s student refining a technology that some believe could be regulated out of existence?

“It’s all about the control system,” he explains. “An internal combustion engine has hundreds of parts moving thousands of times per minute because the energy is coming from an series of continuous explosions. If you can figure out how to monitor and control that system in real time, you’re going to be able to control just about anything. And other types of engines may have a place in the future energy system.”

Fuels like Dimethyl Ether (DME) are already being examined by the transport industry because at a molecular level they have no carbon-carbon bonds –– they can’t create soot emissions –– and have the potential to meet the stringent European EURO-6 emissions standards. These fuels can be created from conventional hydrocarbon sources like natural gas, but also can be produced from biological sources.

“You still can’t beat the power-to-weight ratio of fuel-driven engines, so for applications like transport trucks these low-emissions fuels could make sense for a long time to come,” Gordon says.

That’s why Gordon is in Aachen working with a Field Programmable Gate Array (FPGA) –– a tool that can provide the real-time data needed to keep an engine stable whether it runs on gas, DME, or even hydrogen.

An FPGA is a easily-programmable circuit with countless applications –– from communications to medical technology. Because it harnesses both new and old technology, it’s also the best tool available for monitoring engines.

“Microprocessors are flexible and fast, but they work in a series –– they answer one question, then another,” Gordon explains. “When you’re tracking the reaction happening inside an engine’s cylinder, you don’t have that much time.”

The FPGA solves the time problem by using hardwired basic logic blocks connected by a routing fabric that allows them to act as flip-flops and perform binary calculations. The fabric can be programmed by the user, so the blocks can be configured to tackle a variety of different questions, including monitoring engines. This is the same sort of technology that got the Apollo missions to the moon –– it isn’t particularly flexible, but it’s fast.

“With only basic logic blocks available on an FPGA you’re mostly doing addition, subtraction and multiplication –– but you’re doing it extremely fast, and it’s reliable,” he says.

Once programmed correctly, an FPGA system can track what’s happening inside the cylinder of an engine while the fuel is burning, allowing the control system to make changes within nanoseconds to keep an engine running smoothly. That information could make alternative fuels usable in the real world.

Very few Canadian researchers are working with FPGAs for this purpose, but by going to a German university with strong relationships with the European automotive sector, Gordon has found himself on the cutting edge of the technology.

Soon he’ll bring his new expertise home, where he can apply it to all sorts of current and future energy technologies.

Gordon loves the history he’s encountering in Europe, and thinks Aachen is a fantastic place to study.

“I can board a train at my local station and end up in London. There’s high-speed rail to Frankfurt, and there’s so much to see,” he says. “But Edmonton is home, and I’m looking forward to being close to my friends and family again.”

His exchange wraps up in June, and upon his return he’ll begin writing his Master’s thesis, while also reflecting on what comes after graduation. Industry opportunities beckon, but the prospect of pursuing a PhD and applying his FPGA expertise at the U of A is very appealing.

Whatever he decides, he expects the relationships he’s developed during his exchange will be part of the picture.

“One of my reasons for coming to Aachen was to meet and work with some of the best people in this field, but I honestly didn’t realize how valuable it would be,” he admits. “One way or another, I think I’m going to be working with a lot of these people for the rest of my career.”

For now, he has data to collect. With the workbench up and running he can configure the FPGA to run a different set of calculations, and see if the information it sends to the control system allows his test engine to run more smoothly.

“Can’t be a tourist every weekend,” he smiles. “I’ve got engineering to do.”

Future Energy Systems is rolling out a program that will enable more of its HQP to participate in international exchanges with institutions including RWTH Aachen. More information will be available soon.

For more information about Control of CI Engines for Efficient and Robust Biomass Utilization, click here.