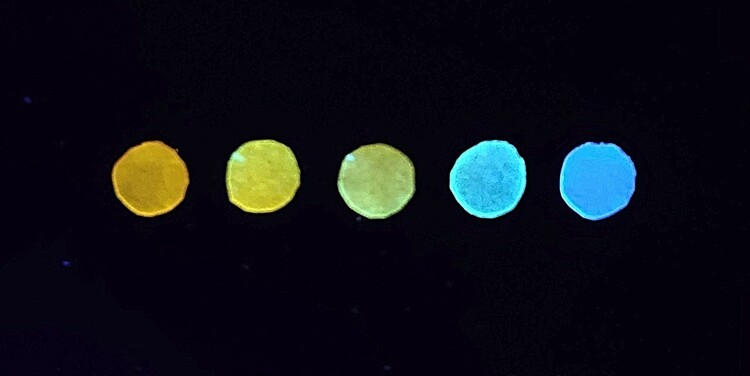 The paper-based sensor turns orange as it is exposed to carbon dioxide. The inexpensive, easy-to-produce sensors could have uses in smart buildings or other facilities where continuous CO2 monitoring is needed. (Image: Al Meldrum)

New sensor has potential applications for smart buildings and industry.

A new sensor for detecting carbon dioxide can be manufactured on a simple piece of paper, according to a new study by University of Alberta physicists.

“You can basically think of it as a litmus paper for carbon dioxide,” said U of A physicist Al Meldrum, co-author on the study led by graduate student Hui Wang.

“The work showed that you can make a sensitive carbon dioxide detector out of a simple piece of paper,” Meldrum said. “One could easily imagine mass-produced sensors for carbon dioxide or other gases using the same basic methods.”

The sensor, which changes colour in about one minute based on the amount of carbon dioxide in the environment, has many potential applications—from industries that make use of carbon dioxide to smart buildings. And with its paper base, the sensor is inexpensive to create and provides a simple template for mass production.

“In smart buildings, carbon dioxide sensors can tell you about the occupancy and where people tend to congregate and spend their time, by detecting the carbon dioxide exhaled when we breathe,” Meldrum explained. “This can help to aid in building usage and design.

“Carbon dioxide sensors currently can be very expensive if they are sensitive enough for many applications, so a cheap and mass-produced alternative could be beneficial for these applications.”

While the research demonstrates the sensing ability and performance of the technology, Meldrum noted that mass-producing such a sensor would require further design, optimization and packaging.

The research was funded by the Alberta/Technical University of Munich International Graduate School for Hybrid Functional Materials and the U of A’s Future Energy Systems.

The study, “An Ultrasensitive Fluorescent Paper-Based CO2 Sensor,” was published in ACS Applied Materials and Interfaces.

This story was originally published on Folio.ca, read it here.