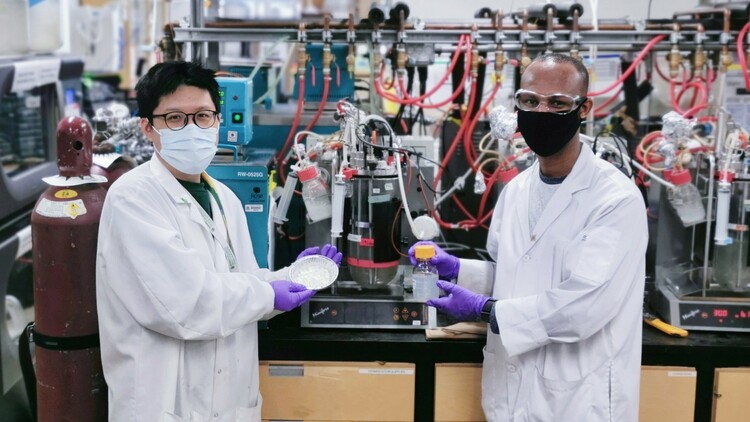 Researchers Ronny Hung (left) and Dagem Haddis hold a tray of wood pulp and a bottle containing a solution of cellulose nanocrystals produced through a new biorefining process developed at the U of A. (Photo: Bingxin Hai)

University of Alberta research is brewing up better ways to help ethanol producers make the most of plant waste they use to make their fuel.

A process developed by researcher David Bressler’s lab in the Faculty of Agricultural, Life & Environmental Sciences makes it possible to break down stubborn plant tissues to make clean-burning ethanol, and also creates a renewable high-value product “with remarkable properties,” said Michael Chae, operations director for the Biomass Energy Network and a manager with the research program.

Cellulose nanocrystals (CNCs) created in the U of A biorefining process have generally been found to have the strength and stiffness of steel, as well as properties that make it a potential thickener for industrial coatings and paint, and can be chemically tweaked for qualities like water resistance.

With growing worldwide interest in CNCs and their potential uses, the product is currently fetching about $1,000 per kilogram, Chae noted.

The U of A-based research—which is also part of Future Energy Systems, a cross-disciplinary research and teaching network working to develop innovations for energy transition—focused on breaking down cellulose.

Cellulose is a main component of plant material made of glucose, a sugar that can then be fermented into alcohols like ethanol, which is blended with gasoline. The team was able to formulate a mild enzymatic preprocess that breaks down loosely packed regions of cellulose to create fermentable sugars and allows the production of CNCs from the more tightly packed crystalline regions, which traditionally cost more to break down into glucose. In this way, they were able to almost double the amount of CNCs they could get from the production process.

“The advantage to our biorefining process is that if ethanol producers can convert those tightly packed parts of cellulose to something more valuable than glucose, that can help their profitability,” noted Chae, a co-author on the study.

“It’s now possible to produce two different things from a single feedstock, and that gives the industry some market flexibility in tailoring to ethanol and CNC markets.”

An advanced approach to fermenting glucose was also developed through collaborative research from the labs of Bressler and Dominic Sauvageau of the Faculty of Engineering.

Their application of a self-cycling fermentation process allows cells to grow indefinitely when producing high levels of ethanol. This differs from the batch process commonly used by industry, which requires downtime to clean and reset equipment, Chae said.

“It minimizes the time the cells aren’t producing anything; there’s no lag phase in getting cells growing after starting a new batch.” The research showed that self-cycling fermentation results in improved production of ethanol ranging from 37 to 75 per cent.

The researchers next want to ramp up their work through field-testing the biorefining process at an Alberta InnoTech research facility, to go beyond the limited amounts of sugars and CNCs that can be produced in a lab.

“A pilot facility can process much larger quantities, which allows us to get to economies of scale,” Chae said. “To make it a commercial process, it needs to be profitable so there’s a need to see what the calculations and yields are in large-scale production.”

Ultimately, the goal is to have ethanol producers integrate the U of A-developed process into their existing production systems, Chae said, noting while the research team has primarily experimented with wood pulp, it’s also studying the potential of other plant biomass, such as crop residue.

“At the end of the day we want to make several products. We can’t look at biorefining as what one product can we generate, but what are 10 things we can generate from biomass? That’s how we will be successful.”

The research has been supported by Future Energy Systems, the Natural Sciences and Engineering Research Council of Canada, InnoTech Alberta and BioFuelNet Canada.

This story originally appeared on Folio. Read it in its original form here.