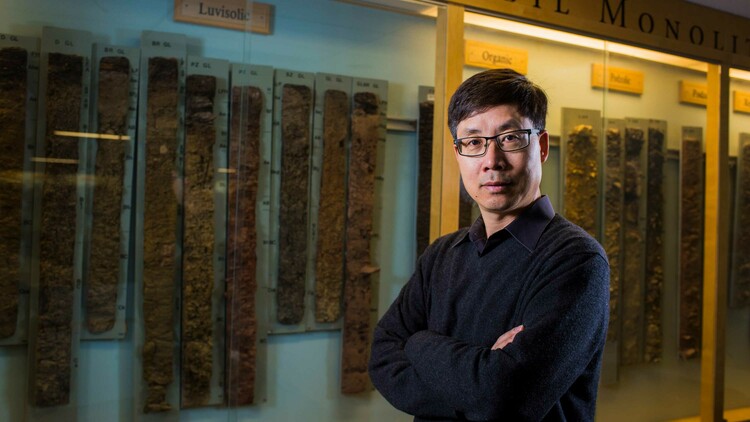 Scott Chang is working with colleagues at the U of A to refine the creation of biochars for specific industrial purposes, such as removing contaminants from wastewater. (Photo: John Ulan/University of Alberta Museums)

It looks like the throwaway scrapings from a barbecue grill, but biochar is fanning the flames of discovery as University of Alberta researchers explore the product’s environmental benefits.

The blackened byproduct—created from waste like cow manure, wheat and canola straw, and sawdust produced in Alberta—has many uses that help the environment and add value for industries, said researcher Scott Chang.

“The applications are really wide open,” said Chang, a professor in the Faculty of Agricultural, Life & Environmental Sciences (ALES) who is part of Future Energy Systems, a cross-disciplinary research and teaching network at the U of A working to develop innovations for energy transition. 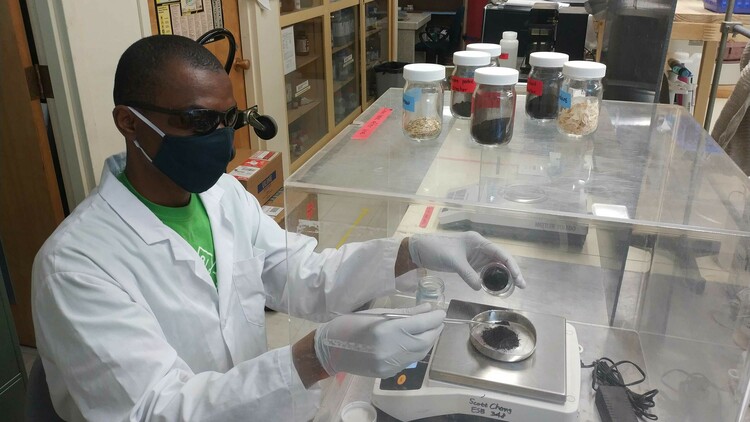 Researcher Christopher Nzediegwu works with a biochar sample in the lab. Nzediegwu says biochars could be customized for multiple applications by refining the combination of waste ingredients and production methods used to create them. (Photo: Supplied)

“Our research is providing information that would help produce biochars and hydrochars for a specific end use by selecting the right feedstock type, production methods and thermal conversion conditions,” Nzediegwu said.

Biochars the team is working with have potential to capture contaminants from wastewater, remove carbon dioxide from the air or stabilize contaminants in soil. “Biochars generally have excellent properties such as large surface area that make them multifunctional, which is exciting,” he added.

Finding the formula for custom uses

In one of the group’s latest studies, they were able to find the optimum temperature, thermal conversion method and raw material—in this case canola straw—to create an efficient biochar for removing lead from synthetic wastewater.

The research will now scale up from the lab to a test environment, to explore the canola straw biochar’s effects on removing heavy metals from oilsands process-affected water. The experiment also gives the researchers a chance to test the best ways to actually apply biochar, Chang said.

“Do you mix biochar in the water or stuff it in a bag that would allow wastewater to flow through? This lets us work out the operational details.”

The study also advances understanding of how different feedstocks and temperatures used in the thermal conversion process affect the efficiency of the resulting biochars for wastewater treatment. “It’s important to have that data for specific feedstock types and production conditions so that different biochars can be designed for specific applications,” said Chang.

The technology, once fully developed, creates designer biochars—a value-added product that can ultimately help oil, mining and other resource industries as well as municipalities remediate their wastewater.

Another recent study by the U of A team also shows biochar to be useful in keeping nitrogen in soil longer, reducing emissions of nitrous oxide, a potent greenhouse gas. Biochar—particularly that made from sawdust—also holds potential as a solid fuel to power industrial boilers, the team discovered.

Chang also collaborated with researcher Hyun-Joong Chung of the Faculty of Engineering to explore biochar’s potential use in making supercapacitors and rechargeable batteries; the study revealed that biochar contributes to creating a superior material that has a high energy density and flexibility for the supercapacitor to perform well under low temperatures.

Though the cost to produce biochar is still high now, Chang believes the expense will eventually come down, making it viable for large-scale applications.

The market for biochar is growing globally through groups like the International Biochar Initiative and the US Biochar Initiative, mostly drawing interest for climate change mitigation, and biochar is already being manufactured and sold commercially on a large scale in Korea, China and other countries, Chang noted.

Some companies across Canada are also producing biochar on a small scale for application in agriculture and horticulture industries, he added.

“There’s huge potential for biochar in dealing with environmental problems, and we hope the industry really picks up on technology development.”

The biochar research is supported by the Natural Sciences and Engineering Research Council of Canada Discovery Grants Program and the Canada First Research Excellence Fund, which supports the U of A Future Energy Systems research program.

This story was originally published on Folio - it can be read here.

Learn more about Christopher and Scott's work by clicking here.