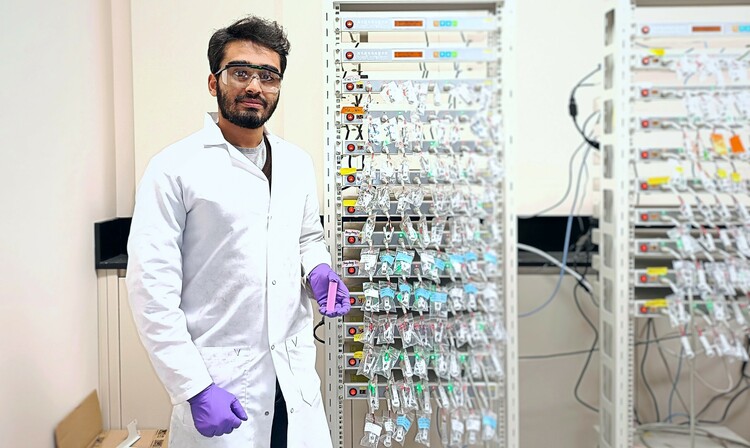 New methods of recovering rare metals from spent batteries could be a win-win for the environment and manufacturers looking to cut costs.

Powering everything from cellphones to electric vehicles, lithium-ion batteries are part of everyday life – but they also wear out eventually, and that comes with a cost to the environment.

Now, a University of Alberta researcher is exploring how to recycle and regenerate the spent batteries in more eco-friendly ways.

Experimenting with a recovery method for metals like lithium and cobalt that are used in the batteries, Anil Kumar Vinayak, a master’s student in the Faculty of Engineering, is underpinning his work with the principles of a circular economy.

The idea is based on a closed-loop system in which products and their components are used to the fullest, then ideally recycled, reused, regenerated, upcycled or refurbished to minimize waste and pollution.

With waste from electrical and electronic equipment rapidly accumulating over the last decade, “adopting this approach will aid in resolving a major chunk of the issues we face in terms of waste management and associated environmental challenges,” Vinayak believes.

The concept is also “a perfect model” for addressing several issues in battery production, including the cost and reliance on mining to supply raw materials, bottlenecks in supply chains and energy use, he adds.

Based in the lab of professor Xiaolei Wang,Vinayak is putting an eco-friendly spin on hydrometallurgy. It’s one of the current methods of reclaiming the metals in spent batteries for reuse in manufacturing new ones.

The process typically uses harsh mineral-based acids, but to recycle the metals from the cathode — the positive side of the battery — Vinayak is instead experimenting with milder, organic chemicals that have minimal environmental impact.

The less corrosive and toxic chemical mixtures also mean cost savings in maintenance and handling for industry. And because they can be reused, organic alternatives are a more economical option for recycling companies operating in the niche, Vinayak says.

Using a similar method, he’s also working to make the current process more sustainable for regenerating graphite, a mineral used in the negative side of the battery, called the anode. Once purified and repaired, the graphite can be reused in new batteries or refurbished for other applications such as lubricants.

Vinayak is also continuing work on previous U of A research to upcycle the metal from spent cathodes, by “doping” it with nickel and manganese to see whether battery capacity can be increased.

All of the work shows promising results for performance, he notes.

Using his organic acid mixtures, Vinayak was able to recover more than 80 per cent of the lithium from the spent batteries, and “once that figure gets closer to the 100 per cent mark, it can be scaled up for industry,” he says.

And because the hydrometallurgical method is already in general use, the application of organic acids could be adopted “almost immediately,” he adds.

Vinayak was able to achieve complete regeneration of graphite in spent anodes as well, representing a step towards more sustainability.

“It’s exciting to achieve comparable results to that of existing methods through an eco-friendly alternative.”

“This kind of work benefits battery and car manufacturers, as well as industries that depend on metals usually found in batteries.

“The impact is quite relevant and imminent.”

Vinayak’s work is supported through funding from Future Energy Systems, a cross-disciplinary research and teaching network at the U of A working to develop innovations for energy transition.