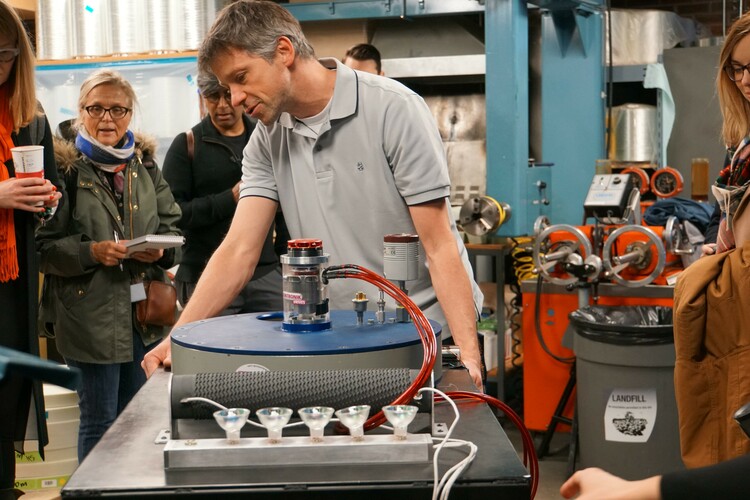 In his lab, Pierre Mertiny researches flywheels for energy storage, and engages often in outreach and teaching opportunities with the public.

The interest in renewable energy may be growing, but there are still many misconceptions out there. Pierre Mertiny, ’05 PhD, comes across these myths all the time. He’s a mechanical engineer and principal investigator with the U of A’s Future Energy Systems. He’s here to share some facts.

While renewable power sources will get cheaper and more efficient with time, much of the technology is already in place. Mertiny points to his native country, Germany, as a prime example. He says that on an ideal sunny, windy day, the country can get up to 75 per cent of its electricity production from renewables.

That’s not the case anymore. “Wind and solar are cost competitive, if not cheaper, than any of the conventional energy carriers these days,” he says.

Now, companies are choosing to invest in wind farms not only for the environmental benefits but also for the economics, adds Mertiny. For example, a company connected to U.S. investor Warren Buffet is building a $200-million wind farm in southeastern Alberta this year.

Myth 3: You have to pick sides.

Undeniably, some people are skeptical of renewable energy. Others call for a system that depends on it. For Mertiny, the way forward requires balance — and collaboration.

He tackles the issue from a transdisciplinary approach, where engineers, economists, social scientists and others plan for a practical way forward.

“These are tough questions and there is no silver bullet,” he says. “It’s not like we can just stick with gas or coal or move to 100 per cent renewables right away. People have to work together. It takes a collaborative effort to find the optimal solution.”

Myth 4: Canada is behind the curve.

In reality, this country is a global leader in renewable energies and technologies, says Mertiny. Canada ranks seventh in the world for renewable energy production, with 17 per cent of the nation’s energy coming from renewables. This is largely thanks to hydro power, which harnesses the energy of the country’s many roaring waterways.

Mertiny is optimistic. He says, “Countrywide we are actually doing really well.”

Pierre Mertiny is one of many speakers to share expertise through alumni webinars. Visit uabgrad.ca/OnDemand for more content.