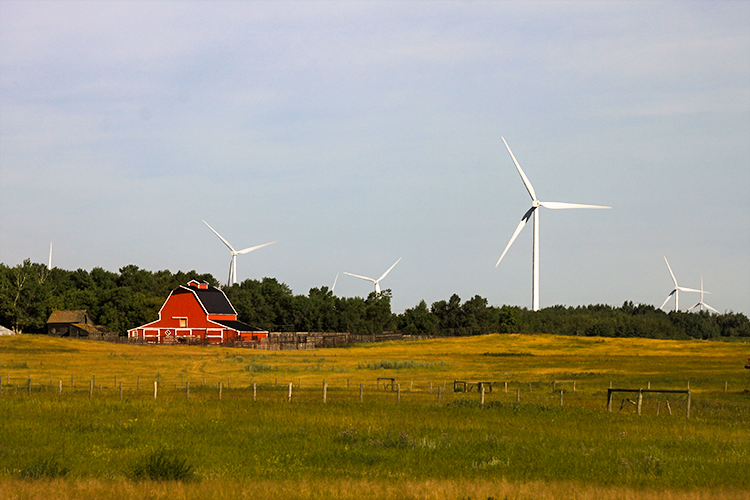 Ensuring smooth sailing for wind power in rural Alberta will take cooperation and communication with landowners, not winding up for a fight. (Photo credit: Aleksandra Afanasyeva)

Sonak Patel believes academic research should provide information to people, whether on a vast societal scale or to the small communities that collectively make up our world.

“Research is often used to just siphon information up to the academy, and it would get stuck there –– only academics benefit,” he explains. “That’s not the way it should be, and I hope the momentum is shifting.”

A Masters student working under Future Energy Systems Principal Investigator John Parkins, Sonak has turned that philosophy towards the problem of energy in Alberta. He wants to know why renewable energy, and particularly wind power, isn’t seeing more widespread adoption, and what can be done to accelerate the province’s transition to this viable renewable energy source.

This question has brought him into direct contact with a fundamental reality: the highest feasibility for wind energy development is not in the city backyards of urban consumers, but instead takes place in rural areas, often built on farmland and ranchland owned by families who have often cared for their land for generations. Wide adoption of wind power relies on their support for the system, and academic research needs to do a better job addressing their concerns.

“The problem we’re finding is that these rural landowners aren’t in favour of wind power. Our job is to find out why, and try to help open lines of communication.”

The Alberta Wind Energy Rural Landowner Report, a project Sonak and John have completed in collaboration with Professor Sven Anders and Graduate Student Monique Holowach, is a step to fill the gap.

A weathervane for renewable energy

The foundation of Sonak’s work was a map that he and Masters student Elizabeth Dowdell first assembled in 2018, surveying all of the renewable energy projects in Canada. This gave him and the Parkins research team, including Masters student Andrea Miller, a clear picture of the state of energy technologies on the landscape across Canada. Click here to see the map. 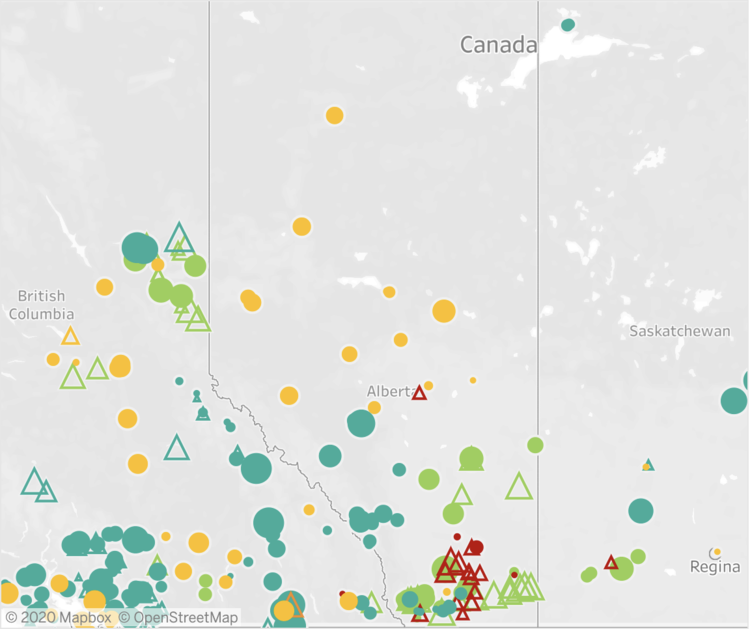 A still of the interactive Canadian Renewable Energy Project Map showing Alberta's renewable energy projects. It was developed by John's team as part of his FES research project, Measuring Costs and Benefits of Energy Transitions.

While hydro-power is the most prevalent renewable energy source in the country, and solar power is another technology quickly gaining public attention, other potential renewable sources like wind have lagged behind. Sonak believes that no single renewable technology will be able to meet Canada’s future energy needs, meaning a combination will be required. Wind is one of the crucial potential sources, but unfortunately, its adoption in Alberta has been notably slow.

To understand why, Monique, working with supervisors John and Sven, devised a survey including detailed questions around the topic of wind power, and asked 400 rural landowners to respond with their thoughts. The results were collected into a 50 page review with Sonak serving as lead author –– the aforementioned Alberta Wind Energy Rural Landowner Report ––  which summarizes the general feelings on the subject, and highlights gaps in the conversation and understanding of wind power technology. It can be downloaded here.

The results were a wake-up call for the research team, who were surprised by the lack of support for wind energy development, especially compared to solar.

“Large-scale solar farms are good for renewable energy, but use a lot of agricultural land.” Sonak explains. Wind power would not take agricultural land out of production, which appeared to make it a more natural technology for rural landowners to adopt.

The survey results showed that landowners had fundamentally different concerns, related not to agricultural production but to the good of their local community. Their concerns began with a belief that the construction of wind turbines would be negatively viewed by surrounding neighbours and community members. Respondents believed that building a wind farm would profit one owner without benefiting other neighbours –– while those neighbours would still deal with potential negative consequences from turbines, including reduced property values and visual impacts. 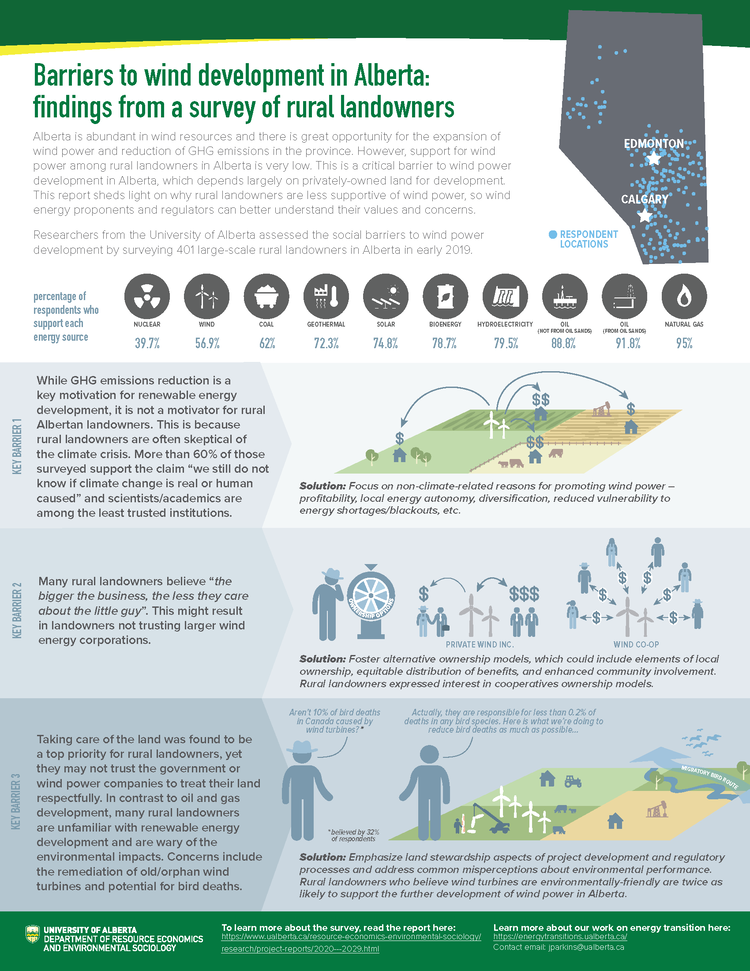 Some significant results from the study are synthesized into an infographic about wind power in Alberta, with the hopes that this will help open dialogues between landowners and regulators. Outlining the key barriers to wind power adoption will be key to fostering understanding and progress. Click here to see it larger.

“Landowners perceive that building these would be unfair to their neighbours,” Sonak summarizes. “It doesn’t matter how valuable they are to fighting climate change if they are damaging relationships in the community. This is something that matters deeply to the people who have to live with the turbines every day.”

These community impacts gained even more significance in light of a general skepticism among rural landowners around climate change questions. More than 60 percent of respondents believed that there is still uncertainty about whether climate change even has an anthropogenic cause, and less than 30 percent believed that adopting renewable energy sources in Alberta would have a positive mitigating impact on climate change.

“While the science of global, human-caused climate change is generally accepted by  researchers, it fits into a different context for many landowners, and they’re still skeptical about it,” Sonak explains.

This skepticism was compounded by a generally negative view of wind power specifically as inefficient and cause for other environmental issues. Some specific concerns included environmental misconceptions: 32 percent of respondents believed wind turbines accounted for 10 percent of all bird deaths and 36 percent believed that wind turbines only ever make up the energy it took to transport and construct them. Taken together, all of these factors combined to make wind less popular than all other sources of energy generation asked about in the survey, except nuclear.

These results might seem like a recipe for pessimism about the future of wind technology, but Sonak highlights an important finding: the landowners surveyed overwhelmingly responded that they felt a strong connection to their land, considering themselves stewards and expressing a desire to protect its natural state.

“The landowners want to protect their land,” Sonak says. “We have to make the case that wind is a solution, and we won’t do that unless we address their concerns for their communities.” 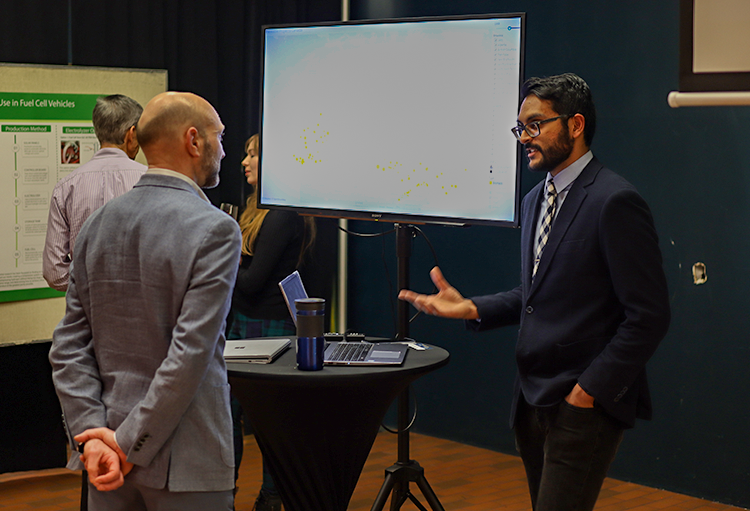 Sonak (right) believes that the future of our energy system depends on open communication, which he practices here by discussing the Canadian Renewable Energy Map at a research event.

Sonak believes that showcasing different ownership models for wind developments will help break through many of the barriers to the technology’s adoption in rural Alberta.

“People trust their neighbours,” he explains. “Community energy is a way to ensure that projects like wind power will benefit not just one landowner, but their neighbors too. And it can give these rural communities more autonomy.”

Our existing fossil fuel-driven system, he points out, relies on power plants run at very large scales, meaning the system is quite centralized –– most of the energy generation is happening at one locale, then the energy is transported outwards to where it’s used.

“This isn’t unique to Alberta, it’s a very common energy system,” he adds. “For a long time, energy systems planning was done from a very engineering point of view. That means a technological focus, economies of scale, and centralizing production to supply outwards.”

In contrast, community energy is focused on decentralization: “Energy is produced where it’s consumed. It’s a redefining of the rigid structure we’re so used to.”

This type of energy system seeks to erase the divide between the big energy producer –– whether hydrocarbon or renewable –– and the small energy consumer –– the average Albertan family, for instance. The term ‘prosumer’ has risen to encapsulate this vision.

Using this type of energy system means that rural communities can stay true to their deeply held values and become shared owners in an energy cooperative. Rather than being forced to welcome big business in the form of large renewable energy corporations, they can remain in control of their land and their surroundings.

“The benefits of the energy generation stay in the local area,” Sonak explains. Rather than the profits going off to a distant, likely city-based energy corporation, as happens with big power plants, the benefit stays with the people who live with the power installation. “Renewable energy like this becomes just another type of farming, with a different crop.” 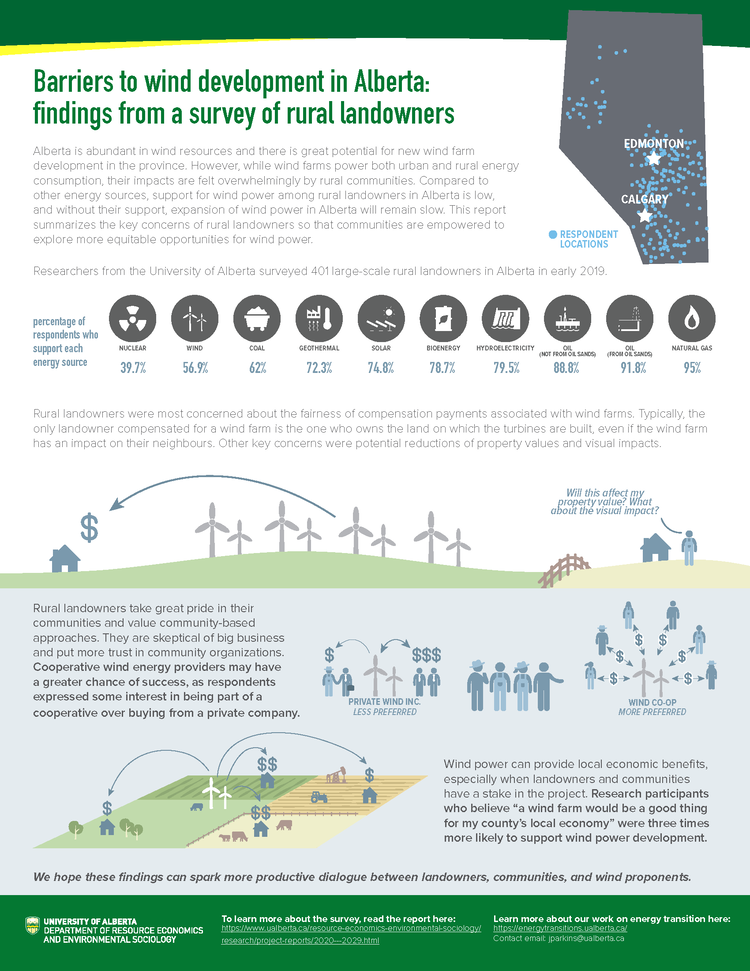 A second infographic demonstrates the a key concern of the survey respondents: fairness of compensation. Alternative power ownership models could address those concerns, and provide a community-focused, economic incentive towards wind power adoption in rural Alberta. Click here to see it larger.

Fortunately, renewable energy is more scalable than traditional power generation, meaning that smaller prosumers, including rural communities, can afford to start small and grow into larger production if their needs increase.

However, wide implementation of wind power still relies on public acceptance, and people’s opinions are guided by what they know

“We found that, generally, people who think wind farms have environmental and economic benefits  are more likely to support wind power,” Sonak says. The survey, and other work by John, also revealed that people who live near renewable energy sources –– and likely have first-hand experience interacting with them –– were more likely to support them. Localized energy, like in the community energy model, also results in a better understanding of energy behaviour, meaning better energy usage and climate change action from the people that live in the area.

“There’s a lot of information out there, and not all of it is consistent,” Sonak says. “If we can do a better job of understanding what matters to rural landowners, and addressing their concerns, then I think we’ll earn the trust we need to share current information about these technologies.” To that end, and to get their research out there, John and his team worked with research communications professionals to develop the infographics embedded in this article. These infographics help share the project’s results with rural landowners, developers, and policy makers. 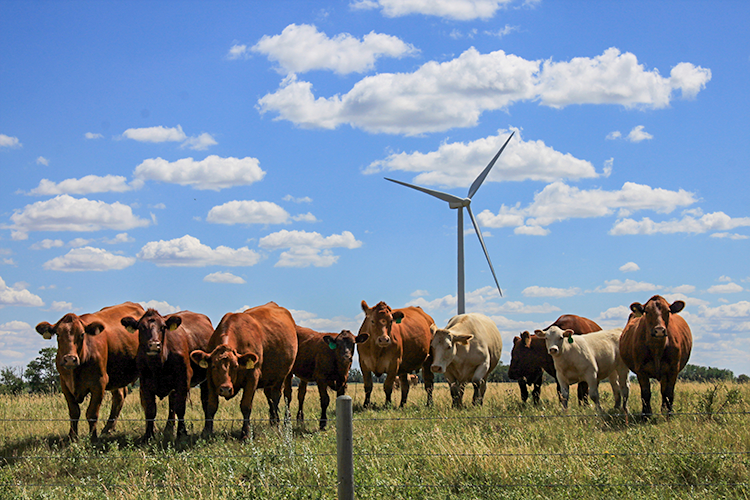 One of the points Sonak and the team are clear about is that the goal of the project is not to take sides in a renewable energy debate, but to understand what matters to everyone involved so that common ground can be found, and just, responsible, and fair energy systems can emerge. Though they will host many of the renewable energy generation, rural communities are only part of that picture.

“We have to look at energy with the perspective of all kinds of communities,” Sonak says.

With that in mind, while Monique is continuing to work with this survey to understand rural landowner perspectives, the Parkins group is next turning its attention elsewhere too: Andrea Miller is working with Indigenous communities, while Sonak turns his attention to municipal governments.

“Municipally-led energy projects are starting to emerge, so it’s a good time to study why they’re starting in some places and not in many other places.”

Exploring ways to encourage more municipally-led projects is one of Sonak’s research goals, because relying on established municipal structures to lead energy projects could allow people to be more influential in determining how they’ll be directly impacted by energy generation.

“It’s the aspect of fairness. Energy projects have impacts on the communities that host them, so the people who live in those places should be linked back to benefits,” he concludes. “That principle doesn’t change whether it’s a big city or rural Alberta. With renewable energy, we have the chance to make the system more just for everyone.”

To learn more about the project Energy Transitions in Canada, click here.