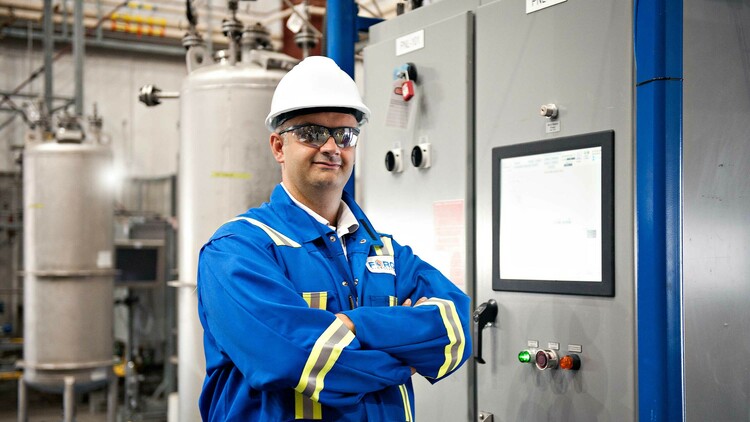 The investment, which includes $1.99 million in direct funding and $900,000 in in-kind contributions, will go toward setting up an advanced fuel-testing suite in lead researcher David Bressler’s lab and will also support the work of several graduate students and post-doctoral researchers working on the project.

“The funding sets us up for the next decade of supporting the sector,” said Bressler, a professor of bioresource technology and fermentation in the Faculty of Agricultural, Life & Environmental Sciences (ALES).

Working with several industry and government partners since 2003, Bressler’s research group has been developing and patenting technology to convert waste lipids—fats and oils—into hydrocarbons used to produce biofuels.

Their latest work is a three-year project to develop biofuel for the aviation industry that has a lower carbon footprint than fossil fuels and can be sustainably supplied from renewable products like restaurant grease and tallow from the rendering industry.

“As the airline industry and Alberta recover from the pandemic, the Alberta Biojet Initiative at the University of Alberta will build on our historic strengths in energy research and position our province as a key supplier of low-emission fuel,” said U of A president Bill Flanagan. “This funding commitment from Natural Resources Canada will help drive innovation forward to the benefit of both the environment and economy. The U of A is proud to be part of this exciting venture.”

The biofuel also provides a convenient short-term replacement as the aviation industry works towards meeting emerging emission reduction standards in the sector over the next decade, Bressler noted.

“Biojet fuel is the quickest, easiest and most effective strategy to meet increasing emission standards in the near future.”

If it takes off commercially, the patented biojet fuel could result in an estimated $133 million in revenue and 63 direct and 31 indirect jobs in Alberta alone by 2030. “This technology is creating a fundamental core industry,” Bressler said.

“If the product we are developing does what it is supposed to do, we would have an economically viable pathway to a renewable jet fuel, which means massive market uptake, given the massive demand in the world for sustainable, renewable fuels.”

The project also leverages one of Alberta’s strengths, he said.

“This could be important for the province, as it’s one of the hotbeds for production of agricultural lipids, and we’re bringing in this new high-value application.” At the same time, it would create a market for agricultural and food producers to sell their waste lipids such as rendering fats, inedible crop-based oils and corn oil produced from the ethanol industry.

Forge Hydrocarbons, a TEC Edmonton spinoff company based on Bressler's research, is already building a $30-million commercial plant in Ontario to produce renewable gas and diesel, with hopes to include the jet fuel production in its design—or make that part of a second anticipated facility for Alberta, he said.

The company has already arranged for sales of any of the fuels it makes at the commercial scale, Bressler noted.

Collaborating with fellow U of A researchers Marty Luckert in ALES and Bob Koch in the Faculty of Engineering and their graduate and post-doctoral students, Bressler’s group is now working to scale up the biojet fuel to commercialization readiness for Forge Hydrocarbons.

The student researchers are working closely with the project’s industry partners, gaining valuable skills they can take into the workplace, Bressler noted.

“These young researchers are working in university labs, but by engaging with our industry partners, they’re learning to interact with government labs, doing project management and getting a deep education in an applied setting. This makes them the type of grads industry wants.”

The cutting-edge lab will also work with other companies to develop and test other types of renewable fuels that could be generated from municipal waste, forestry byproducts and crop waste, he noted.

This story originally appeared on Folio. Read it in its original form here.