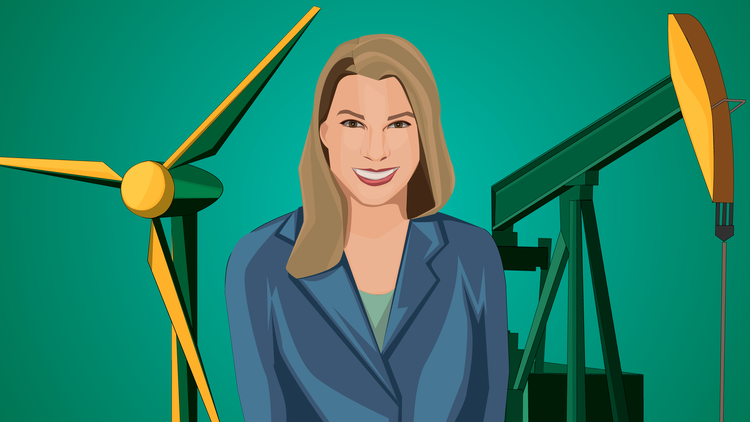 Turn off the lights, take public transportation, install solar panels, choose efficient features for your home. These are some of the steps being taken by individuals seeking to respond to climate change and participate in the energy transition it demands.

But beyond individual actions, how is the public as a whole responding to the idea of the energy transition, and what factors shape public attitudes? That question has been the focus of recent work by Lori Thorlakson, a Future Energy Systems researcher and a Professor of Political Science at the University of Alberta.

“It’s a project on energy transition, the political aspects of it. What shapes public support for an energy transition and the role of economic expectations in that position,” Lori explains. “The majority of Albertans believe we need to move away from oil and gas, but there’s a strong percentage opposed.”

Working in the Future Energy Systems project Assessing Political Pathways for Energy Transition with co-Principal Investigator and University of Calgary professor Melanee Thomas, Lori is exploring why opposition to transition endures. This work, with contributions from postdoctoral fellow Christian Schimpf and others, finds that the answer may be tied up in a deep mix of economics and identity, and some of the findings have recently been published in the journals Environmental Politics and Energy Policy.

Trusting the messenger and the values

To get an idea of public support for the energy transition, Lori and her colleagues realised they needed to hear how people think about oil and gas. Establishing this understanding involved a variety of methods, including a survey of 2,600 Albertans – representative, according to the census – about their attitudes toward renewable energy, and the way that they feel about the oil and gas industry.

Looking into this further, the team found that one important factor affects people’s response: the source of the message.

Using data from an experiment embedded in a follow-up survey deployed in four Canadian provinces, Lori’s team found that when the business community speaks about opportunities and losses, the message resonates with people concerned about the economy. For instance, when businesses share a new message around the potential losses of missing the opportunity to transition –– a message that contradicts the widespread view that energy transition will in itself be an economic loss –– it is seen as more credible. But when similar messages are emerging from political elites on all sides of the spectrum, and sometimes even scientists, they encounter greater resistance.

“Anti-elite sentiment means that those messages may not work,” Lori explains. “There’s a lot more to dig into: different kinds of elites, how trust in scientists changes things.”

Identity was another critical factor that arose from the survey –– specifically how much people identify themselves with the oil and gas industry.

“We learned from our first survey that the biggest predictor of opposing the energy transition that we found is the belief that there’s a great future ahead for oil and gas. Our follow-up research suggests that it is not necessarily employment in the industry that predicts these views, or opposition to energy transition in general.  A lot of those actually involved in the oil and gas industry can see opportunities from the transition. We saw more resistance to the idea of energy transition from people who had a strong identification with the industry—people who reported feeling proud of the industry, or who felt personally attacked when the industry was criticized.” 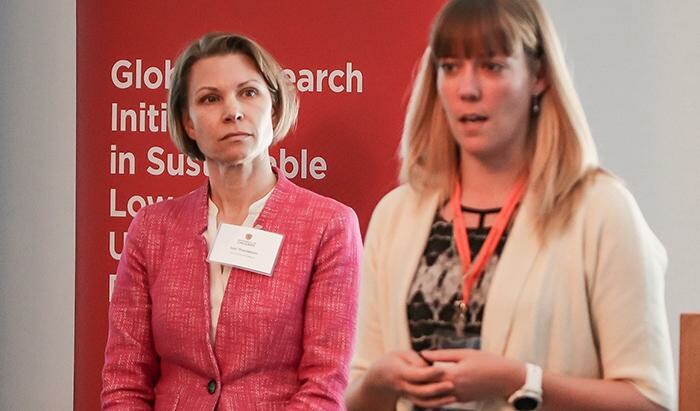 Dr. Lori Thorlakson (left) and Dr. Melanee Thomas (right) introduce their research at a joint University of Alberta-University of Calgary workshop in 2019.

Public support for the energy transition isn’t the only work that Lori has been examining; she has also studied the corporate world, carefully analyzing annual reports from six hundred companies in five industrial sectors.

“We wanted to see what their messaging was in relation to the energy transition,” Lori explains. “Do they acknowledge that it’s happening, where does it rank in priorities, and how did they see their own role in that transition?”

Half of the reports Lori’s team read were from 2013, the other half from 2019, allowing them to see how messaging had shifted from before to after the 2015 Paris Agreement. The shift towards acknowledging climate change as an urgent problem was astounding: “We see it more profoundly in European listed companies, rather than North American listed companies.”

In 2019 annual reports, climate change is most often listed first in key urgent trends, followed by digitization, then the COVID pandemic. “There is an aspect of optimism here,” Lori explains. “Companies are identifying an economic opportunity, a change for technological optimization.”

Of course, with the rise of the transition in the public consciousness, there is also the rise of greenwashing –– painting actions or intentions in an eco-friendly way without actually doing the work. Her team can address this to some degree by assessing the tangible targets and actions declared by the company, along with identifying how companies disclose climate-related risks. Overall, however, they approach the reports as strategic communication that signals the messages that companies perceive to be important to send to their shareholders. “Even greenwashing can tell us something important about shifts in companies’ thinking on the role of climate change and energy transition.”

With her team, Lori also wanted to test a hypothesis: do the ‘dirtiest’ industries greenwash the most? She notes that oil companies tend to have the biggest emphasis on climate change in their websites and other promotional materials.

“Why are they doing that? Because they identify reputational risk if they don’t,” Lori says. “The oil and gas industry knows they need to do something about climate change, about the energy transition, and they can’t ignore it if they want to survive.”

Reputational risk is also an existential concern for the entities Lori specializes in studying: political parties.

“I’m really interested in how parties position themselves in terms of issues,” she says. In her previous role as the founding director of the UofA’s European Union Centre of Excellence, she worked closely with partners in Germany on a variety of political topics, including many environmental themes. That led to her current interest in political pathways of energy transition.

“The energy transition is not just about the environment, it’s about a process of fundamental structural economic change,” she elaborates. “There will be winners and losers, and some aspects have become polarized. How people are positioning themselves is tied to how political party stances are evolving.”

That is where reputational risk kicks in.

“Alberta does face a reputational risk. We’ve long been an oil and gas province, it’s a major part of our history and economy. That’s something all our political parties have to balance,” she explains. This helps explain former-NDP Premier Rachel Notley’s pro-climate, not-overtly-anti-oil strategy. “She knew they had to come up with a credible climate strategy to get a pipeline, and visibly support the sector too.”

Ongoing changes to the regulation of global systems to fight climate change will continue to complicate Alberta’s reputational risk, making access to markets increasingly difficult for the province’s oil.

Both the previous NDP and current Conservative government have made highly-public efforts to diversify the province’s economy towards clean energy, with recent investments in hydrogen power and carbon capture, utilization, and storage (CCUS), as well as the deployment of technologies originally developed for the oil and gas sector to support renewable energy.

But public polarization makes this challenge yet more difficult. Attempting to convince strong opponents of the value and necessity of the energy transition can result in an even more staunch opposition, a digging in of the heels known in social psychology as the boomerang effect.

“There’s lots of resistance already to the federal Liberal government in Alberta, and adversarial politics is not helpful to reaching a solution,” Lori adds.

It’s also true that not every group will be equally affected by the energy transition and leveraging the differences in impact can yield support for a political party. This may lead to an increasing urban-rural divide in Alberta’s political systems as well as other jurisdictions in Canada and the United States.

“Alongside the energy transition, we need to focus on a just transition – help the people that will be affected most,” Lori says. “As long as people in one area suspect that their wellbeing is being thoughtlessly jeopardized by elites from another area, it will undermine trust, and it will undermine progress.”

So where do we go from here? What policies and shifts should be underway or prioritized for the future?

“One of the most important measures will be in finding the right way to communicate and make partnerships that work in the real world,” Lori says. “Elites can say the right thing, but if people don’t trust them, it’s not going to shift opinion.”

Her advice to those elites: don’t simply present a rosy, comfortable picture of oil and gas prosperity that emboldens opposition to the energy transition, and don’t imply that the transition to renewable sources will be automatic or without challenges.

“As decarbonization of the economy proceeds around the world, the export potential of oil and gas is going to change. We need to take a very clear-eyed accounting of what the costs and risks associated with that are,” she adds, emphasizing the importance of having full discussions about economic costs and opportunities. “We tend not to talk about the economic opportunities we might be forgoing, the costs that we bring on ourselves by not adopting early, or the opportunities we might miss by not solving some of the transitional challenges ourselves.”

You can learn more about Lori’s research, Assessing Political Pathways in Energy Transition, by clicking here.