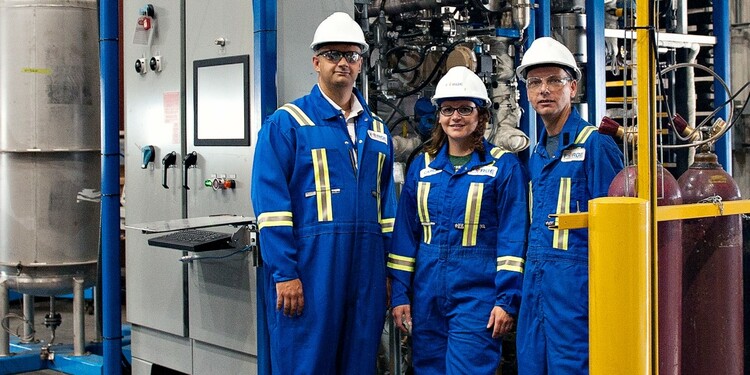 Forge uses technology developed by U of A scientist David Bressler that converts waste fats and oils into hydrocarbons used to produce biofuels.

The facility, now being built south of Sarnia, Ont., is expected to be operational this fall and will produce at least 25 million litres of renewable biofuel each year. Forge estimates the project will create about 150 construction and engineering jobs, and another 45 full-time jobs to operate the facility.

“This is an example of the innovation system working from ‘cradle to grave’—and it's a good estimate of how long it actually takes a process-based technology to move through,” said Bressler, whose research to invent the technology began 17 years ago.

“It's not a widget, it's not a circuit, it's a resource-based industry process that had to be scaled.”

Bressler’s patented technology involves heating waste lipids such as cooking oil, animal renderings and crop seed oil with water at a high temperature, creating fatty acids and glycerol. The glycerol is removed and the fatty acids are heated at more than 400 C until the oxygen within is released. This turns the acids into hydrocarbons that can then be separated into a variety of “drop-in” biofuels—including diesel, gasoline and even jet fuel—that are chemically indistinguishable from petroleum-based fuels.

Petroleum companies have used hydrogen and a mineral catalyst to remove oxygen, but the process costs more than Bressler’s method and requires high-value feedstock such as canola.

“We know that oil under the earth’s crust was created from lipids without expensive catalysts and hydrogen,” said Forge Hydrocarbons founder and CEO Tim Haig, who is commercializing Bressler’s technology after it was licensed through TEC Edmonton in 2013. “Forge mimics nature’s processes, except that we do it in hours, not millions of years.”

Forge’s biofuels don’t need to be blended with petroleum-based fuel, unlike ethanol, and they emit 90 per cent less greenhouse gases during production versus conventional fuels.

Matthias Ruth, U of A vice-president of research and innovation, said the commercial-scale venture is a prime example of how discovery research can drive remarkable innovations and economic benefits.

“When a major international company like Shell invests, it demonstrates the power of research and university-industry connections,” Ruth noted.

“We believe we are a working example of the innovation system working the way it was designed to do, from discovery science to commercialization,” added Bressler, “and each of the funders along the way have an opportunity to recognize their contributions to the overall success.”

Along with the Shell investment, Forge is also receiving a contribution from Valent Low-Carbon Technologies, a Canadian company that invests in low-carbon fuels for industries like shipping, airlines and long-haul trucking.

“Biofuels are critical in the move to lower-carbon marine, aviation and heavy-duty transport,” said Andrew Murfin, general manager of advanced biofuels at Shell. “Collaboration will be key to a successful energy transition.”

With the new investment, Shell and Valent join a list of Forge’s funders and collaborators that includes World Energy—one of the largest biodiesel companies in North America—as well as Lockheed Martin and Sustainable Development Technology Canada.

This story was originally published on Folio.ca, read it here.