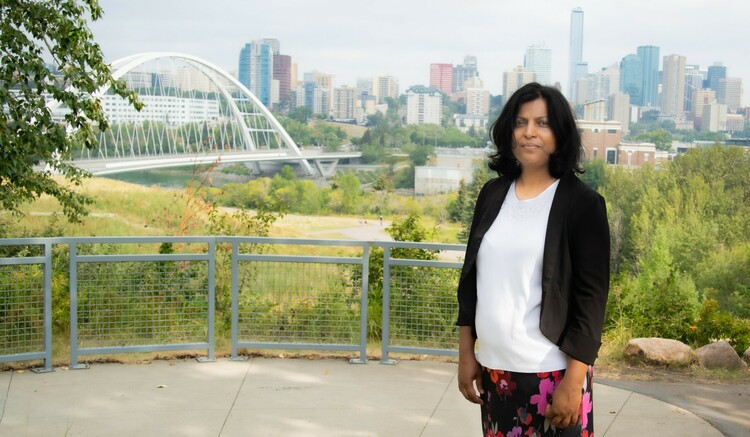 Surface temperatures in the city have increased by as much as 12 C compared with surrounding rural areas over last two decades.

With no trees for shade, and living next door to a sun-baked parking lot, even going outside offered little relief, the University of Alberta researcher recalls.

But then they moved to a neighbourhood filled with mature trees, located near the city’s river valley.

“It’s totally different now,” says Welegedara. “We never use fans and even have to use blankets sometimes in the summer, it’s that much cooler. So it’s a big relief.”

The difference doesn’t come as a surprise for the post-doctoral fellow, whose first-hand experience mirrors her research findings that there are links between various landscapes in Edmonton and hotspots known as urban heat islands, referred to as UHIs.

The research by Welegedara and Sandeep Agrawal in the U of A’s Faculty of Science is focused on whether winter cities like Edmonton experience pockets of extreme heat more common to tropical countries. Their work shows there are urban heat islands around the city that have higher temperatures than surrounding rural areas in both summer and winter.

In fact, over the past 20 years, the city’s land surface temperatures — how hot the ground feels to the touch — have jumped by between six and 12 degrees Celsius overall compared with rural areas, says Welegedara.

Higher urban temperatures can lead to heatstroke or exhaustion and heighten health risks for vulnerable groups such as people who work outdoors, older adults, young children and people with underlying cardiac or respiratory issues. Extreme heat can take a severe toll, including more than 600 deaths in British Columbia in 2021.

“UHIs exacerbate the impact of heat waves, going beyond the comfort zone of humans,” says Welegedara.

“With more intensive and frequent heat waves, extreme heat is likely to increase over the next few years, so it’s important to increase public action to deal with the UHI phenomenon.”

The environment also takes a hit from hot temperatures caused by hotspots by increasing energy consumption to run fans and air conditioners, she adds, resulting in higher greenhouse gas emissions.

Concrete and asphalt contribute to hotspots

To study urban heat islands in Edmonton, Welegedara analyzed satellite images taken year round between 1999 and 2021 and considered 402 neighbourhoods, including industrial areas, residential areas, the river valley and the Anthony Henday Drive freeway.

The hotspots, at their most intense during the summer, are caused by the loss of shade-giving trees and other vegetation to urban development, the analysis showed.

“Built-up” areas like buildings, roads, parking lots, sidewalks and even rooftops contribute to higher surface temperatures, due to the use of concrete and asphalt. The materials absorb and store the sun’s heat, then release it slowly, keeping temperatures high, Welegedara says.

Commercial and industrial areas of the city showed the highest heat intensity, Welegedara says, and were found to have the lowest number of trees, bushes or other greenery, covering less than five per cent of these areas in some cases.

The north side of the city and some downtown areas with low vegetation had higher temperatures than Edmonton’s south side, which was cooler because of the river valley and older neighbourhoods with features like boulevard trees. 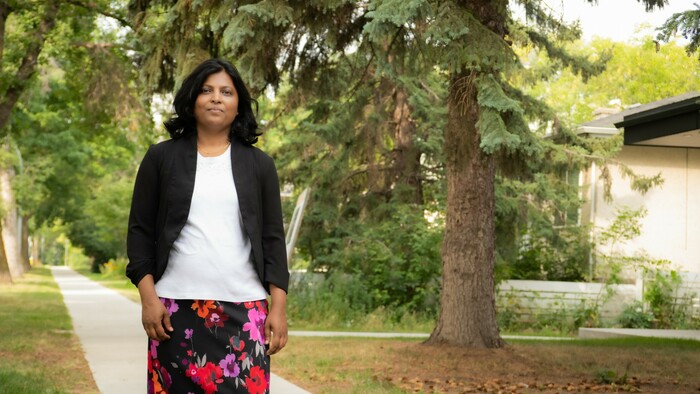 At the same time,the analysis revealed that lower-income people and lone-parent households were more likely to experience UHIs.

“High-income people are living in more vegetated areas around the river valley area and have lower exposure to heat compared with low-income people who tend to live in low-vegetation, high-density neighbourhoods,” says Welegedara.

Smoke from summer wildfires was found to aggravate the effects of heat islands by lowering air quality, posing an additional risk to people with health issues, she adds.

The research confirmed that heat islands exist in winter but while their warming effects could help take a slight edge off bitter weather in the immediate area or allow thermostats to be turned down a few degrees, there’s an environmental downside, Welegedara notes.

“UHIs are still harmful in the long term by reducing snowpack, which could create dry conditions and affect plant growth.”

Overall, the findings show winter cities such as Edmonton need to pay close attention to the rise in UHIs and to include that in their planning, says Agrawal, director of the U of A’s School of Urban and Regional Planning and lead of the Urban Environment Observatory lab.

“While cities like Edmonton have long focused on their identities as winter cities, I believe Edmonton’s identity is changing as the temperature rises over the years,” Agrawal says.

“That means planners need to actively account for both extreme winter and hot summer conditions in their policies, plans and guidelines.”

“Increasing vegetation cover by up to 20 per cent across Edmonton and in each neighbourhood could reduce the current UHI intensity by one-third,” he estimates. But, he adds, “it isn’t easy to find 20 per cent of public land to put vegetation on, unless trees and other plants on private property are protected and expanded.”

Agrawal says development plans and zoning bylaws should mandate the protection of trees on public and private property, as well as discourage use of heat-friendly materials such as asphalt and tar and encourage use of materials that absorb less sunlight for paved surfaces like driveways, parking lots and sidewalks.

Cities like Edmonton that are home to a river and a river valley should take advantage of those natural features when planning urban design and subdivision layouts, he adds.

“That allows for cool breezes off the water in the summer and good use of valley ventilation effects.”

People can also do their part to mitigate the effect of heat islands through everyday actions such as using public transit or turning off their air conditioning while away from home, Agrawal adds.

Having felt the stifling misery of urban hotspots herself, Welegedara hopes the research helps give a heads-up about heat as city dwellers learn to grapple with it.

“We want to reduce potential severe consequences on Edmontonians’ health and well-being.”

The research was funded through Future Energy Systems, a cross-disciplinary research and teaching network at the U of A working to develop innovations for energy transition. The work was also supported by the Alberta Ecotrust Foundation under the Cities IPCC Legacy Research Grant Program and the City of Edmonton, with air quality data obtained from PurpleAir Inc.