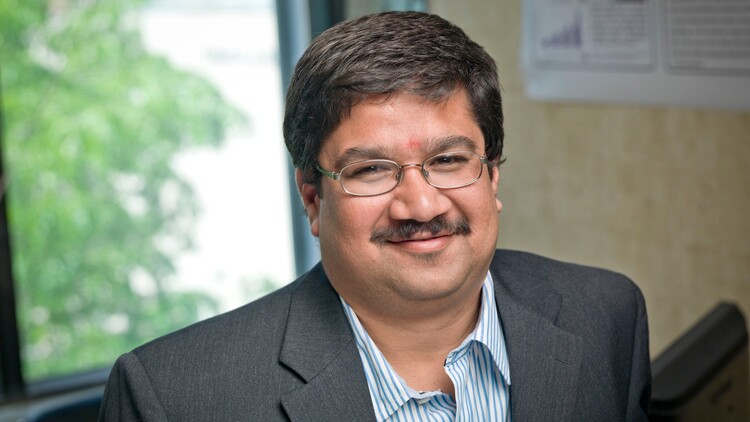 The province has the resources, infrastructure and workforce to produce the cleaner energy source for local and global markets, says U of A expert who advised the government on its hydrogen plan.

On the path to a decarbonized future, Alberta could become a global leader in the export of hydrogen.

Amit Kumar, who advised the provincial government in developing its Hydrogen Roadmap, says the province is already well ahead of the production game, having developed large-scale hydrogen infrastructure and expertise for the oilsands industry.

Alberta is, in fact, Canada’s largest producer of hydrogen, given its use for decades in upgrading bitumen to synthetic crude oil, said Kumar, NSERC Industrial Chair in Energy and Environmental Systems Engineering at the University of Alberta.

Kumar said by expanding that capacity, Alberta could become a leading source of hydrogen for local markets and other parts of the world eager to decarbonize, while also reducing its own carbon footprint.

The worldwide market for hydrogen is estimated to be worth more than $2.5 trillion per year by 2050, especially in North America, the Asia Pacific and Europe, according to the Hydrogen Roadmap.

“There is a lot of demand in the Asia Pacific region, specifically in countries like Japan and Korea,” said Kumar. “They have set targets where they would like to use hydrogen in a significant way.”

Alberta’s Hydrogen Roadmap, a key part of the province’s economic recovery plan, also identifies key markets such as residential and commercial heating, transportation, power generation and storage and chemical processing. In addition to clean fuel, hydrogen is also used to produce fertilizer, ammonia and other chemicals.

One of the cleanest sources of energy, hydrogen produces only water when it is burned or used in a fuel cell.

Producing what’s called “grey hydrogen,” however, requires conversion of natural gas to carbon dioxide and hydrogen, which emits carbon dioxide. Combining that process with carbon capture and storage — another area in which Alberta is a global leader — produces cleaner “blue hydrogen,” said Kumar.

“Globally, we are one of the lowest-cost blue hydrogen producers in the world, given our natural gas prices and the scale at which we produce.”

The challenge ahead, Kumar said, is to progress to “green hydrogen” using wind, solar and biomass energy. But for now, the costs of hydrogen from these sources are high compared with blue hydrogen.

As deputy director of the U of A’s Future Energy Systems network, Kumar’s own research involves modelling various energy pathways — using a combination of renewable and non-renewable energy — to reduce overall carbon emissions in the years to come.

He was recently listed by Reuters as one of the world’s most influential climate scientists and has served on expert advisory panels across Canada, the United States and Europe.

In a 2019 paper in the Journal of Cleaner Production, Kumar’s group found that by investing in new energy-efficient greenhouse gas mitigation strategies, oilsands producers could net significant profits. The team estimated that cumulative energy consumption in the oilsands could be reduced by as much as eight per cent and greenhouse gas emissions by seven per cent by 2050.

In his work for the Hydrogen Roadmap, Kumar modelled some 300 scenarios in which hydrogen could play a key role, including blending it with natural gas in existing pipelines.

Besides existing infrastructure and the potential for increased capacity, Kumar noted there is also a strong, trained workforce in Alberta in the energy sector that could easily be adapted to large-scale hydrogen production.

Not to mention the energy knowledge base housed at the University of Alberta.

“We are one of the leading universities in Canada providing expertise,” he said, “and one of the top 10 in the world for energy research.

“In addition to the chemical and petroleum engineering programs, we have large biomass, wind, solar and geothermal groups.”

Kumar said the Alberta government accepted all of his recommendations for the Hydrogen Roadmap, including training and development investment in Alberta’s universities and technical schools, and providing resources for a new centre of excellence.

He said he’s happy with the roadmap’s direction and is encouraged to see a vision for hydrogen in which the provincial and federal governments are aligned: “On this, they speak the same language.”

According to the Hydrogen Strategy for Canada, hydrogen could deliver up to 30 per cent of Canada’s end-use energy and up to 24 per cent of the global energy demand by 2050.