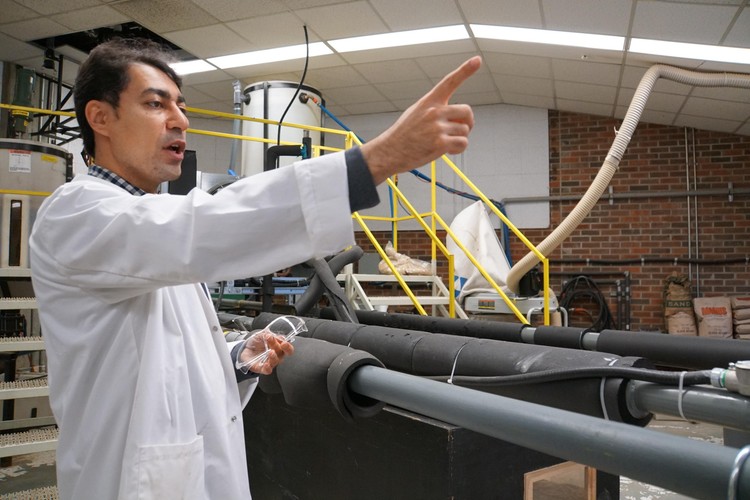 Future Energy Systems HQP Mahdi Vaezi is working on a way to transport biomass through pipelines in a way that is economically and environmentally sound. In his one-of-a-kind lab, he has designed and built a pipeline and determined mixtures to ship plant

Researchers find a way to ship straw and lumber through pipelines

The challenge of reducing greenhouse gas emissions by producing fuel from plants matter has been overcome. Wood byproducts are playing a growing role as a co-fuel in power plants as coal is phased out. And researchers have found ways to convert non-food agricultural byproducts like straw and corn stowe into different types of fuel.

But how do we collect and transport those unrefined byproducts effectively? Shipping them by trucks or railway is not only costly, it also produces more greenhouse gas emissions than it saves.

University of Alberta mechanical engineering professor Mahdi Vaezi, has come up with method of transporting biomass through pipelines in a way that is economically and environmentally viable.

The challenge now is to improve the pipeline transport process and explore different ways to refine the biomass, taking it from its raw state to combustion.

On the first phase of his research, Vaezi designed and built a 25-metre pipeline in his lab. He was able to grind down wheat straw and corn stowe and by simply adding water, found just the right formulation to transport the biomass through his two-inch diameter pipeline, running the system for up to 20 hours at a time.

The economics bore out.

“We managed to prove the technical and economic feasibility of transporting biomass by pipeline. The economics were central to this problem. And we found that if you replace trucks with a pipeline that transports biomass from the farm to a bio-based fuel facility, you cut the costs in half,” said Vaezi. “Now—that is quite an achievement. It gives you an edge if you are competing against fossil fuels.”

Next, the team turned its attention to an obvious problem: 80 per cent of the weight of the biomass slurry is water—you can’t burn it. The energy required to dry the biomass stock would negate any hoped-for emissions.

“You have to get rid of the water, and that adds energy into the whole process. So we start looking into hydrothermal technology because a feature of this technology is that it involves water.”

Hydrothermal conversion of biomass to fuel requires high temperatures and pressure. The key factor here is that the heat is not used to dry the biomass—it is part of the process of converting the biomass to fuel. Another benefit is that hydrothermal technology can branch off into different paths, producing different kinds of fuel in liquid or gas forms.

Vaezi and his team are now collaborating with chemical engineering professor Raj Gupta, who is designing a hydrothermal reactor in his own U of A research lab.

“We are preparing the biomass mixture, transporting it through out pipeline for 10 to 20 hours, then bringing the mixture to Dr. Gupta’s lab,” says Vaezi. “He will feed it into the hydrothermal reactor and process it and produce fuels and other value-added products.

“We can look into all the technology and economic aspects of an integrated pipeline-hydrothermal technology system.”

Fuels developed from plants are considered to be carbon-neutral and the energy density of these fuels—the bang for your buck—is comparable. For example, ethanol made from biomass is the same as ethanol made from oil. Bio oil can be processed into gasoline that meets the same specifications as the gasoline we use in our cars.

“Once you get the result out of this reactor you can send it to any refinery. The whole point is the quantity you get out of the reactor should be large and the cost of that product should be compatible with what those refineries are already receiving and processing.

“So the scale and cost are there. There are technology challenges to be addressed but that would be quite an outcome, to produce clean fuel and energy at the end.”