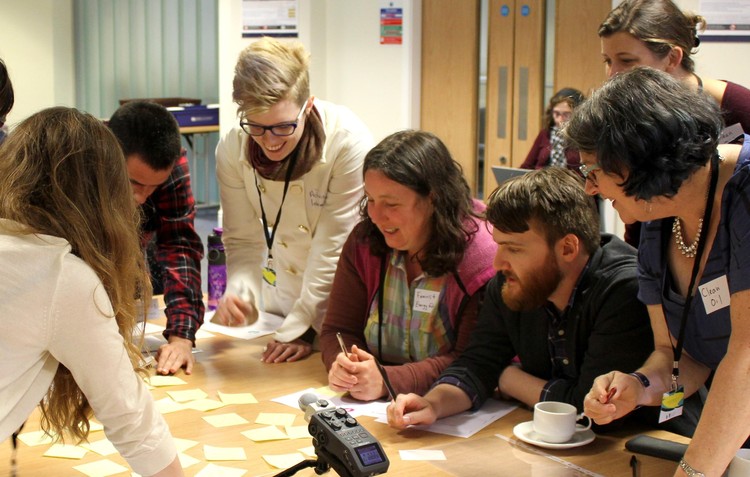 Members of the Energy Humanities research team guide players through a game of 'Perfect Storm! Feminist Energy Transition' at the 2018 Petrocultures conference in Scotland.

This is a special guest post from the research team working in the Future Energy Systems Energy Humanities theme.

Having always wanted to go to Scotland, I jumped on the chance to accompany ten other Future Energy Systems researchers and personnel to the Petrocultures conference in Glasgow.

Petrocultures is an annual conference hosted by the Petrocultures Research Cluster — based at the University of Alberta and co-founded by Energy Humanities Principal Investigator Sheena Wilson — which “supports research on the social and cultural implications of oil and energy on individuals, communities and societies around the world today.

We live in a ‘petroculture’ — a culture largely shaped and driven by petroleum products. Many of us drive cars powered by refined gasoline, and we use these vehicles to do everything from grocery shopping to visiting our families. Even when you buy local food, it’s probable that petroleum products brought it –– and you –– to the market where you find it.

An industry has grown up over more than a century to make sure we have easy access to the fuel for these cars, and entire societies have come to depend on that industry. Understanding how petroleum products have shaped the lives we lead today helps us imagine how different life could be when new energy technologies enter widespread use.

In Alberta especially, our relationships and communities are literally and figuratively powered by oil and gas. The energy landscape in Scotland is similar. Several communities rely on the oil and gas sector to provide jobs, which support their homes and families. And, of course, there is growing debate over the longevity of the industry and its impact on the environment.

At the Petrocultures conference, our Energy Humanities team joined approximately 220 other participants from 25 countries to discuss and think about the future of energy systems on an international scale, learning from each other about our local contexts.

Our Just Powers team of 10 was there representing two of its FES-funded projects — iDoc and Speculative Energy Futures. We launched our Just Powers website, premiering 42 “highlight” clips from our many interviews with FES scientists and researchers, and debuting a workshop edition of Co-Investigator Sourayan Mookerjea’s Perfect Storm! Feminist Energy Transition role-playing game.

This game places players into different roles within the energy system, and challenges them to make decisions based on common values to prevent a “perfect storm” of ongoing catastrophic climate change events. Unlike other energy transition and resource management role-playing and scenario modelling games, Perfect Storm! builds issues of cultural and class politics into the logic of the game. In turns, players are provided with opportunities to discuss, strategize, and develop energy transition plans, including policy recommendations, cultural-political tactics, and social strategies that address class politics. The game aims to build capacities to enact social, cultural, and political paths towards socially-just energy transitions.

For some, the concept of feminist and decolonial energy transition was new; these participants wanted to know more about equitable energy futures. For others, the idea was familiar, but they were surprised by the amount and variety of outputs created by the Just Powers teams and wanted to learn how they could replicate our processes in their own communities.

We had a number of interesting conversations within and after our workshops — many of which have led to international partnership requests, new professional relationships, and requests for ongoing updates.

I came to Scotland with the lochs and the sheep in mind. I left with a new understanding of their petroculture — but also of their windmills, solar panels, and other forms of renewable energy including wave, tidal, geothermal, and biofuels.