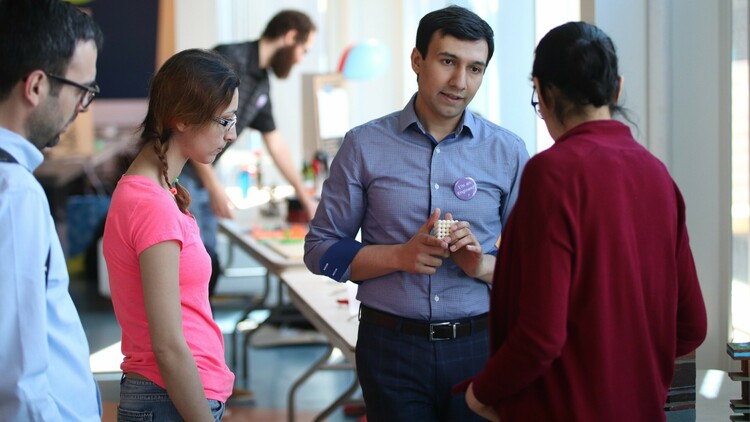 Alireza Rangriz Shokri explains his work to fellow researchers with the U of A's Future Energy Systems, using a 3D printed cube to explain how CO2 and brine can be used to fill in gaps in underground formations of porous rock.

Discovery that the technology is viable moves it a step closer to becoming part of a low-carbon economy, says researcher.

University of Alberta research is making new strides in discoveries about capturing and storing carbon — while also yielding a high-value end product from carbon dioxide.

A process that injects the greenhouse gas deep below ground, then circulates it to extract heat and geothermal energy, has proven viable in a feasibility study by U of A researchers.

The discovery moves the technology a step closer to pilot testing and ultimately to becoming part of a low-carbon economy, said Alireza Rangriz Shokri, a research associate in the Faculty of Engineering who conducted the study.

“This is a step forward to commercializing the technology, and if successful, it’s a potential breakthrough for sustainable energy production,” he said.

Beyond carbon capture and storage

Known as CO2 plume geothermal or CPG technology, the process is an exciting development that extends beyond the concept of just capturing and sequestering CO2, he added.

“The science of carbon capture has traditionally focused on CO2 storage and less on CO2 utilization such as extracting the geothermal energy. But doing both at the same time is novel for today’s technology.”

The heat and geothermal energy extracted from the CO2 could be used to generate electricity and become a revenue stream that helps offset the costs of carbon capture and storage, Shokri noted.

“It’s one of the main obstacles: currently, storing CO2 doesn’t generate revenue. We’re just disposing of it underground, so there’s no end product. But if we generate geothermal power from the process, it has the potential to be used in several ways.”

That could include powering pumps used to inject CO2 underground, or CO2 storage facilities eventually having the capacity to sell electricity to industrial or residential markets.

Shokri, who presents his findings during Energy Week at the U of A, conducted the feasibility study at Aquistore. The Saskatchewan facility is the world’s most comprehensive field lab for researching stored CO2.

He used numerical tools, lab and field data to examine the injection history of CO2 storage operation at Aquistore and to validate his simulations with field measurements, including downhole injection pressure and temperature. He then used his model to assess the CO2 circulation process, identifying key performance variables such as produced volumes of CO2 and brine — the salty water that could dissolve the greenhouse gas.

His work showed that the process was both viable and safe.

“We were able to show that at the end of its life cycle, CPG permanently sequesters 100 per cent of the injected CO2 in the geological reservoir, and the CO2 is not going to escape into the air.”

Pilot test would be world’s first

The findings will now go through an assessment to determine suitability for pilot testing, and it will be a world first if it moves to that phase.

“No one has done a CPG pilot test to show we could extract geothermal energy using CO2.”

Equally exciting is how the project has expanded knowledge about CO2 storage in general, he added.

“The results from our study will also help improve our understanding about things like intermittent and long-term energy storage. It all builds towards making CO2 storage a safe and workable solution.”

Collaboration with other researchers around the world also provided the geothermal expertise needed to test the CPG technology, said Shokri: “It's a valuable transfer of knowledge; we learn from each other.”

His work is also part of Future Energy Systems, a cross-disciplinary research and teaching network at the U of A working to develop innovations for energy transition.