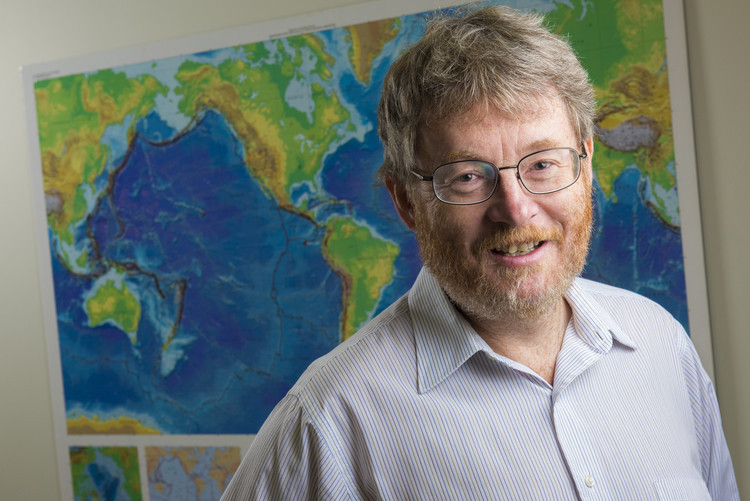 Professor and geophysicist Martin Unsworth stands in front of a map of Earth's Ring of Fire, a region of volcanoes circling the Pacific Ocean. Photo credit: John Ulan

Geophysicists at the University of Alberta are working to generate images of underground rock structure to target the best places to extract the hot water needed to produce geothermal energy.

“Geophysicists give images of what rocks are underground - and this can guide drilling,” explained geophysics professor Martyn Unsworth, world-renowned for his work with volcanoes and geothermal energy. “We know what’s down there as a result of measuring seismic waves, and other geophysical signals, and this helps choose locations for geothermal energy production. Once the wells are drilled, the engineers bring the hot water up to the surface.”

“What works in one geographical location doesn’t work everywhere worldwide. We’re looking at a range of energy technologies that will work together. We have to have a system in combination.” —Martyn Unsworth

The work is helping to find the best places to extract the hot water needed to generate electricity in a geothermal power plant. Using geophysics to select the best locations should help lower initial investment costs for drilling. One of the challenges of developing geothermal energy is that it requires a larger initial investment for drilling, upwards of more than a million dollars per well. Once the system is up and running, however, geothermal works 24 hours a day, year-round.

Unlike other forms of alternative energy that require favourable weather conditions to function--windy days for wind, sunny days for solar--geothermal is what is referred to as baseload alternative energy. The heat comes from the interior of the Earth, and is released as the Earth continues to cool down from the molten state in which it was formed. The amount of heat escaping varies from place to place, with some of the hottest locations being found close to volcanoes.

Unsworth explained that most conventional geothermal energy production worldwide is generated in locations with heat sources, such as volcanoes or faults in the Earth’s surface that allow hot water to reach the surface. The Ring of Fire is a region of volcanoes circling the Pacific Ocean, and some of the countries that make the most use of geothermal energy can be found here. Canada’s West coast is part of the Ring of Fire and has a number of locations that could be suitable for geothermal electricity production.

To that end, the Future Energy Systems project is investigating locations in British Columbia and the Yukon. Unsworth has worked as a consultant for a number of First Nations communities that, due to remote geography, run on either diesel generators or have power grids that aren’t connected to the rest of the country. As a result, they rely on diesel either trucked or flown in to the community and have increasing interest exploring geothermal energy as a cost-effective and lower-carbon energy source.

Geothermal energy can also be developed in locations such as Alberta, where underground temperatures are lower than in BC, but still high enough to provide heat and electricity.

“For many years in Alberta, there hasn't been much of incentive to do something different for energy other than burning coal, oil and gas. There is a growing realization that burning large quantities of fossil fuels is not sustainable due to the climatic effects of the carbon emissions. Canada has great geothermal potential, and many communities are open to using different energy sources”.

There’s arguably never been greater incentive to move forward with alternative energy sources as society becomes more acutely aware of the irreversible changes in climate that could arise from continued carbon emissions. Add to that a more progressive government at both the provincial and federal level combined with a federal funding infusion of $75 million at the University of Alberta alone to develop near-future energy technologies, and the conditions are right to realize potential solutions to steer society towards a more responsible and blended energy model.

“There’s no one form of alternative energy that’s going to solve all the problems,” continued Unsworth. “What works in one geographical location doesn’t work everywhere worldwide. We’re looking at a range of energy technologies that will work together. We have to have a system in combination.”

The original version of this story appeared on the UAlberta Faculty of Science website. For more science news, click here.