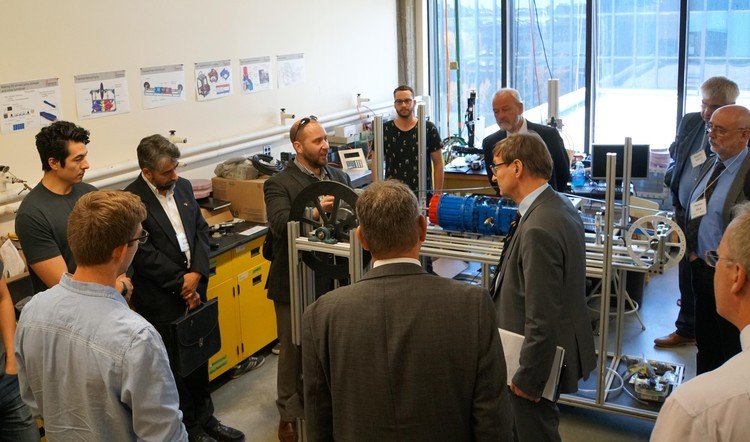 Members of the Future Energy Systems research group played an important role during the visit of a delegation from the Helmholtz Association to the University of Alberta this week. Led by President Otmar Wiestler, 15 representatives of the association –– which includes 18 centres with a combined budget of more than €4 billion –– spent two nights in Edmonton as part of a tour of Canadian universities. Other stops included two nights in Toronto, and one in Vancouver.

The Helmholtz Association addresses a wide range of societal issues through world-class fundamental research, an approach that closely aligns with the principles of the University of Alberta. Since the signing of a memorandum of understanding in 2009, the two institutions have forged a strong relationship through the Helmholtz-Alberta Initiative (HAI), which has supported more than 40 projects in the areas of energy and environment, infectious diseases, and neurodegenerative disease research. Between 2010 and 2015, the Government of Alberta invested $25 million in HAI to support energy and environment research –– an investment that laid the groundwork for the launch of Future Energy Systems.

During this week's visit, Principal Investigators Marc Secanell (Grids & Storage), Jonathan Banks (Geothermal) and Anne Naeth (Land and Water) briefed the delegation about past collaborations between the University of Alberta and Helmholtz, and introduced ideas for potential future projects. Newly-built ultra-low temperature differential engines were then demonstrated by Future Energy Systems geothermal graduate students during a lab tour, before Director Larry Kostiuk and Executive Director Stefan Scherer helped chair a workshop with Helmholtz energy researchers and President Wiestler. That workshop generated a series of criteria to guide future cooperation on energy projects.

Working with international partners like the Karlsruhe Institute of Technology (KIT) –– a Helmholtz centre –– provides researchers and graduate students with opportunities to share knowledge and infrastructure in a complimentary fashion. For instance, German researchers have begun development of new geothermal energy technologies with the potential to enhance efficiency and viability, but have been restrained by a lack of test sites in their densely-populated country. Thanks to its smaller population and the more than 400,000 holes already drilled into its landscape by the oil and gas industry, Alberta has numerous well-understood sites that might be suitable for testing geothermal installations. The oil and gas sector has also provided the province with world-leading expertise and infrastructure for accessing subterranean resources, including geothermal fluids. A research partnership in this area could clearly provide advantages to both sides, and potentially yield substantial advances in the harnessing of geothermal energy.

Future Energy Systems looks forward to opportunities to collaborate with the Helmholtz Association on numerous types of energy research in the coming years. Additional discussions will follow this visit, and should any joint projects be pursued, they will be profiled on this website.

For more information about the Helmholtz Association, click here.