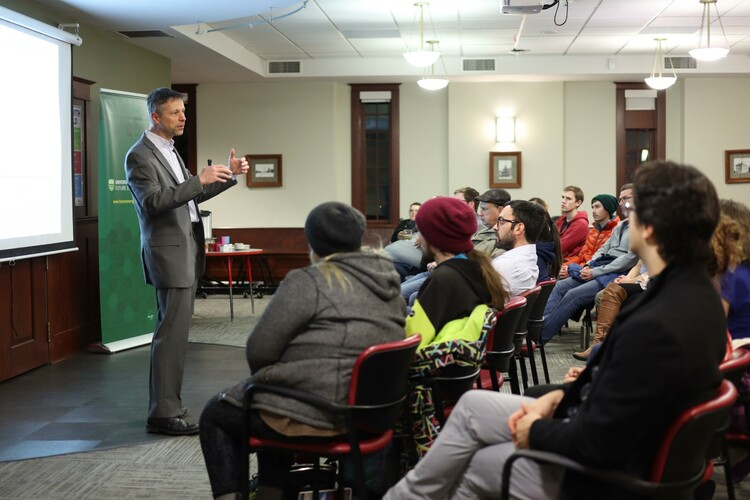 "At EPL we already host monthly lectures in partnership with the Archaeology Society and the U of A's Faculty of Graduate Studies and Research," explains Cassidy Munro, Community Librarian at the Strathcona Branch. "The new 'Energy Talks' series gives Edmontonians the opportunity to learn more about a very important topic from the researchers who are working at the cutting edge."

The first talk explored the challenge of storing energy generated by intermittent renewable energy sources like wind and solar –– a topic made especially timely by Alberta's recent cold snap, when temperatures remained below -30 degrees Celsius for a week and forced the province's electric system operator to issue multiple alerts, in part due to low wind generation.

"We know the wind doesn't always blow and the sun doesn't always shine," Mertiny said during the talk. "If we can store the energy that's generated by wind and sun, we can deploy it when it's needed. Storage could make renewables a player during peak times in the energy market."

A professor of mechanical engineering, Mertiny has researched both conventional and renewable energy systems, and is familiar with the advantages and disadvantages of both. Over the last decade, his group has studied energy-storing flywheels as a better alternative to chemical batteries for things like LRT trains, electric buses, and renewable power installations.

"Batteries don't like the cold and they don't like to be charged and discharged quickly," he explained. "Flywheels don't care about the temperature and they can charge and discharge very quickly. But they can't store energy over the long term, so they're not the perfect solution for everything."

He introduced an idea that's being considered for off-grid communities that want to transition to renewable power: a hybrid storage system that uses both flywheels and chemical batteries to make otherwise-intermittent energy available on demand.

But he cautions that implementing such a new technology isn't easy.

"I'm a materials science guy –– I'm really interested in making the best flywheel, and the design of the system. But when you change one little thing in an energy system, it creates all sorts of technical and economic and environmental questions that are beyond my expertise and field of work. I have to work with experts from other fields to understand how to make these technologies work in the real world."

That's why Future Energy Systems spans eight UAlberta faculties and incorporates more than 125 researchers. Social scientists and humanities scholars are working with scientists and engineers to build a broad understanding of how current energy technologies can be improved, new technologies can be developed, and the economical, social, and environmental impacts of system change.

The "Energy Talks" series will showcase research from all of those fields. The next event, running February 26, will feature graduate students Sonak Patel and Andrea Miller from the UAlberta department of Resource Economics and Environmental Sociology. Their work with Principal Investigator John Parkins has mapped all renewable energy projects in Canada, and they have conducted case studies of community-owned projects to see how the benefits of renewable energy installations can be justly shared with the people who live alongside them.

"That's a topic I know very little about," Mertiny said after his talk. "I may show up –– I can ask questions too!"

All Edmontonians will be welcome to do the same every month in 2020. The "Energy Talks" series will be based at the Strathcona Branch, but plans call for it to rotate between other branches in the city based on demand.

"At the EPL we're very excited by this opportunity to share research about such an important topic for Alberta," Munro concludes. "There's a lot to learn when Energy Talks."

For updates about Future Energy Systems research and events, subscribe to our newsletter.