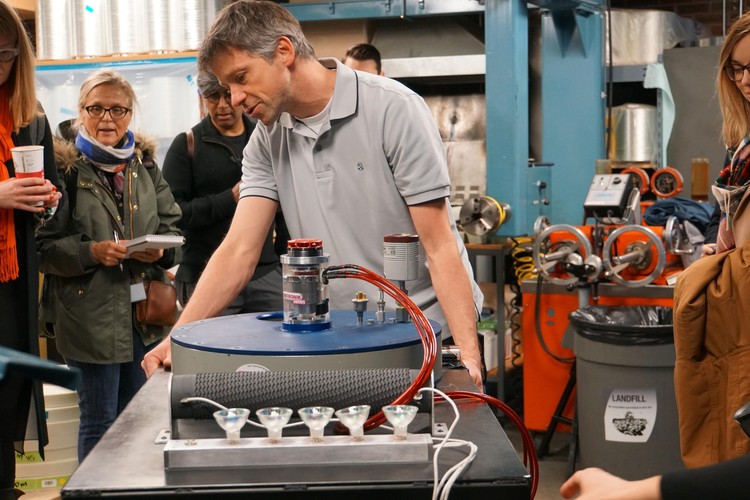 Perhaps one of the most vexing challenges in energy systems is energy storage. We have unlimited power from wind, the sun, and mighty rivers—but despite major advances in recent decades, our energy storage technology is still insufficient.

Pierre Mertiny, a professor of mechanical engineering at the University of Alberta, runs a lab that, for over a decade, has been working in the area of energy systems. A part of his research has been looking at the question of energy storage, which he says is “arguably one of the biggest challenges when it comes to renewable energies.”

Part of the problem of storing energy is the cost. Researchers like Mertiny are chipping away at the challenges of storing energy, creating proof-of- concept solutions aimed at providing power to users at competitive costs.

One of Mertiny’s team’s capabilities is the production of energy storage flywheels. The concept of a flywheel is simple and familiar: a potter’s wheel, for example. A rotating disc collects energy generated by the operator’s hands spinning the wheel or foot pumping a pedal, which keeps the wheel turning at a steady rate even if the potter stops propelling the wheel. The energy is stored in the wheel as kinetic energy.

A new kind of battery

In Mertiny’s case, the flywheel is a “mechanical battery” that stores energy when surplus electrical power is available. An electric motor is used to speed up the flywheel – the charging process. When electricity is needed again the same motor is used as a generator.

For example, flywheels are continuously charged and spinning at massive data centres operated by companies like Google. If electrical power to these centres is lost, the energy of the flywheels provides electricity almost immediately, giving back-up generators time to start up.

The flywheels Mertiny works on initially were designed to store energy generated by systems such as commuter trains or hybrid buses, where excess energy becomes available in the braking process. The flywheels release the energy to help the vehicles accelerate after passengers board and disembark.

“You’re storing this energy in a flywheel, which is basically just a rotating disk,” he says. “But this disc rotates very fast and it can store the energy in a very rapid fashion and release it in a rapid fashion.”

Flywheels have the advantage of being able to store a lot of energy in a short time. Called power density, it’s very high in a flywheel, much better than most batteries. And it’s green: there are no hazardous chemicals. Other benefits of flywheels include long life and the ability to work even in very low temperatures, something that challenges chemical batteries. “They have some very clear advantages,” Mertiny says.

The biggest challenge for a flywheel is friction. “Our flywheel is actually designed to run in a vacuum enclosure so we don’t have any friction with the air,” Mertiny says. “They are rotating fast—over 20,000 revolutions per minute in some of our prototypes.”

Now that Mertiny’s team is reducing energy losses of the flywheel due to friction, they have been approached by some industry players to see if they can extend energy storage time from the order of minutes, which you’d need in a train or a bus, to the order of hours or days.

“We started off with one small project and one graduate student in 2006,” Mertiny says. “Today we have several graduate students who have worked in recent industry projects and now are working under the banner of Future Energy Systems. We are making prototype energy storing flywheels.”

“This is our challenge, to try to design a flywheel that can store energy efficiently for long periods of time,” he says. “And all this needs to be put into practice at affordable costs.”

The largest application of flywheels today is for utilities-scale applications. Utility companies use that stored kinetic energy as a buffer, regulating the frequency of their grid and preventing blackouts. “Instantly you can provide a lot of power,” Mertiny says. “In that case they are very cost effective.”

He is also worked with a local company through the Nasseri School of Building Science and Engineering to connect residential solar installations to flywheels. In this way, it would be possible to collect solar energy during the day and store it with a flywheel and provide power to your home through the evening and night.

“In the future, there won’t be a single energy storage solution that is a good fit for every application,” Mertiny says. For example, there might be applications that are better suited for long-term storage, such as fuel-cell technology with hydrogen, but they are typically not suitable for high power applications.