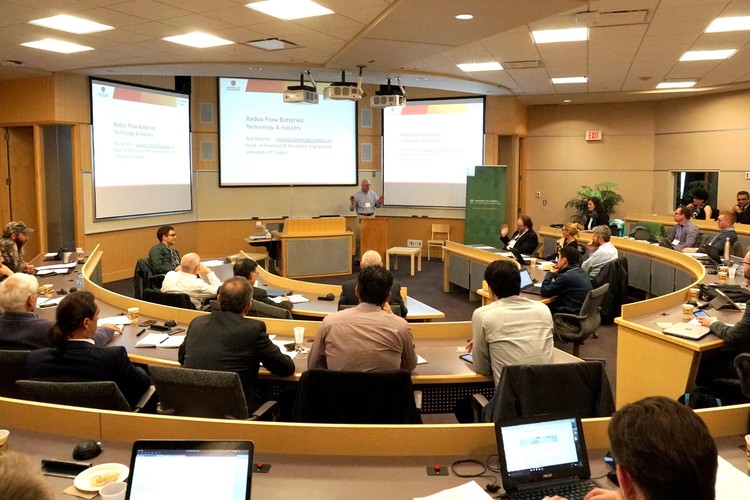 Integrating renewable energy technologies into today's power grid will require effective options for energy storage. This week Future Energy Systems partnered with the Government of Alberta's Department of Economic Development and Trade to host a workshop investigating a new technology that could help meet this need: Vanadium Redox Flow Batteries.

Vanadium is a metal typically extracted from Alberta's bitumen during oil sands production, and when incorporated into a liquid solution it can be used as an electrolyte to store energy. Batteries typically function thanks to the exchange of electrons between different chemicals, but vanadium can exist in multiple valences –– in other words, vanadium atoms can hold different numbers of electrons and exchange them with each other, generating a charge in the process.

Because they involve only one chemical, Vanadium Redox Flow Batteries are stable and are expected to degrade much more slowly than other battery types. Some estimates suggest they could last for 40 years or longer, making them sensible investments for utility companies investing in renewable energy.

Of even greater value could be their scalability. Unlike most batteries, Vanadium Redox Flow Batteries are not self-contained. Vanadium electrolyte is stored in two separate tanks connected to a reactor where electrons can be exchanged. Voltage is controlled by the design of the electrodes in this reactor, while the total capacity of the battery is determined by the size of the tanks.

This design flexibility means that Vanadium Redox Flow Batteries could potentially be customized to suit renewable installations like solar or wind farms at various of scales, enabling those intermittent energy sources to safely integrate electricity into existing grids.

Though the opportunity is considerable, the technology has not been widely adopted. Based on U.S. Department of Energy estimates, only 45.5 megawatts of Vanadium Redox Flow Battery capacity is currently connected to power grids worldwide, compared to 2.2 gigawatts of lithium ion batteries, and 170 gigawatts of pumped hydro energy storage.

One factor limiting further adoption is cost: vanadium prices have skyrocketed in recent years, and the engineering costs of developing entirely new battery systems are considerable. If the price of energy storage cannot compete with the price of energy delivered on-demand by fossil fuels, the technology may not survive in a competitive marketplace.

More research will be required into the design and operation of Vanadium Redox Flow Batteries –– research that may be of interest to Future Energy Systems and the Department of Economic Development and Trade. At this week's workshop, academics, government personnel and representatives from companies at the forefront of Vandium Redox Flow Battery design met to discuss the current state of the technology, and the barriers they foresee moving forward. Stakeholders from across Canada and around the world networked and identified opportunities for collaboration, which may lead to joint research projects in the future.

Understanding the technical practicalities of integrating renewable energy into our existing infrastructure is a key goal for the Future Energy Research program, and diversification of Alberta's energy economy is a priority for the Department of Economic Development and Trade. By partnering for workshops on technologies like Vanadium Redox Flow Batteries, our two organizations will continue to promote energy innovation for Alberta, Canada, and the wider world.

For information about future workshops, subscribe to our newsletter.