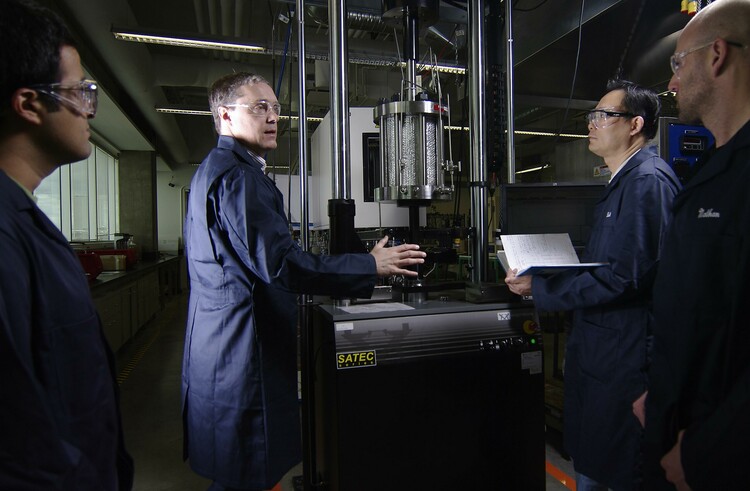 Rick Chalaturnyk (second left) discusses his research on carbon capture and storage with colleagues at the U of A's Geomechanical Reservoir Experimental Facility. A new agreement will see research on capturing and storing carbon within a geothermal reservoir take place at the facility and at the Alberta No. 1 project site. (Photo: Hope Walls)

Developing an ultra-clean source of energy by using carbon dioxide (CO2) instead of water to pump geothermal heat up from deep below the Earth’s surface is one of a list of possibilities behind a new partnership between a team of University of Alberta carbon sequestration engineers and a burgeoning geothermal startup.

Alberta No. 1, Alberta's first conventional geothermal heat and power facility and a signature Terrapin energy project, and a geotechnical engineering team led by Rick Chalaturnyk in the Faculty of Engineering are teaming for a first-of-its-kind investigation on a proposed geothermal site south of Grande Prairie.

Chalaturnyk explained that at the core of the Alberta No. 1 project is drilling two wells to a depth where the temperature is at least 120 C. Naturally heated water from the deep subsurface is pumped to the surface, and the heat is extracted for power and direct use. The now cooled water is then reinjected back and it becomes a closed cycle.

The first phase of the project will result in more than 96,000 tonnes of carbon offsets at full production of green (carbon zero) electricity and heat — the equivalent of taking 20,878 cars off the road.

“Geothermal is seen as an extremely efficient, clean, renewable resource of power generation,” said Chalaturnyk, a professor in the Department of Civil and Environmental Engineering. “It has huge potential.”

What is of interest to Chalaturnyk’s team, however, is marrying the potential of a geothermal future with his expertise in geological storage.

The first inquiry will be to look at a theory that supercritical CO2 — a dense form of CO2 that has the viscosity of a gas — could be used in place of water as the circulating fluid.

And while finding a use for waste CO2 holds immense potential, Chalaturnyk said this same formation could double as a CO2 storage site.

Finally, there is a tantalizing gas-recovery process originally researched as part of the U of A-involved deep saline CO2 storage Aquistore project in southeastern Saskatchewan, called CO2 plume geothermal.

Chalaturnyk explained that after a decade of injecting massive amounts of CO2 into a subsurface reservoir, a plume of supercritical CO2 will develop that, because of its supercritical characteristics, can be brought back up without the aid of a pump and run through a specialized turbine to generate clean power before being returned back into the porous rock it came from.

Potential benefits to economy and environment

Catherine Hickson, CEO of Alberta No. 1, said the results of this research could increase the economic and environmental benefits of geothermal energy, expanding the potential of conventional geothermal development into additional non-traditional markets.

“Combining carbon sequestration with emission-free, baseload energy production has the potential to make geothermal energy not only carbon zero, but carbon negative,” said Hickson. “We believe that this research will be a catalyst, driving the creation of made-in-Alberta carbon reduction solutions.”

Chalaturnyk added that this corner of Alberta is one of the places where researchers have very little information about the carbon sequestration possibilities, and that expansion of the capacity to provide carbon sequestration to carbon-emitting industries is a critical element necessary for Alberta to achieve its carbon reduction goals.

“Even supporting the drilling of the well and collecting the subsurface information is valuable for the province of Alberta,” he said.

The momentum for a project like this has built in just the last couple of months since Alberta Energy announced it is looking at issuing carbon sequestration rights through a competitive process that enables the development of carbon storage hubs. Carbon sequestration storage hubs will see successful operators enter in a business that collects, transports and permanently stores captured CO2 from various industrial emissions sources.

This story originally appeared in Folio, where you can see it in its original form.