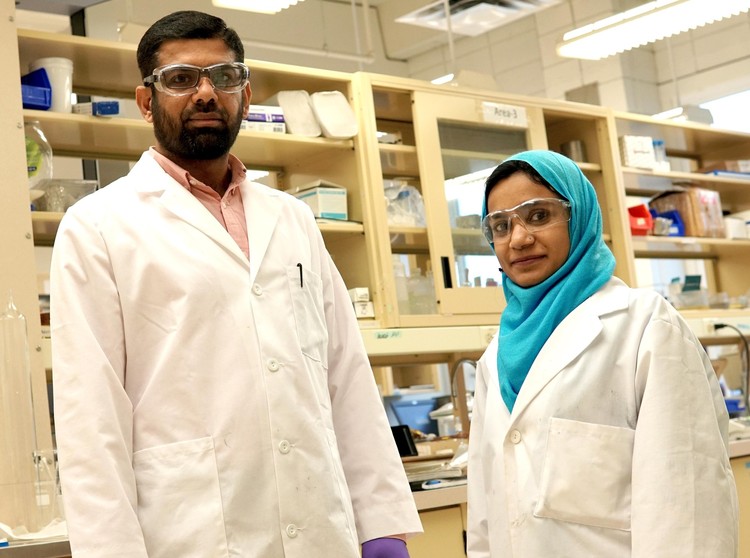 No matter how you do it, producing energy affects water.

In Alberta, the most visible sign of this reality can be found in the tailings ponds being produced around oil sands production facilities, but less obvious types of contamination are also possible. Recent years have seen questions raised about the leaching of cadmium telluride into groundwater from low-cost solar panels. Researchers also continue to raise concerns that hydroelectric projects like Newfoundland and Labrador’s Muskrat Falls might increase downstream levels of methylmercury. Renewable energy technologies promise to eliminate carbon emissions, but their impacts on water still need to be understood and –– if necessary –– mitigated.

Future Energy Systems HQP Muhammad Arshad and Irum Zahara are working on one low-cost tool to deal with these issues: under the supervision of Dr. Tariq Siddique and Dr. Aman Ullah in the project Resilient Reclaimed Land and Water Systems, they are using chicken feathers to decontaminate water.

“There are many adsorbents which can be used to remove contaminants from water,” Arshad says. “Few are as cost-effective as chicken feathers.” 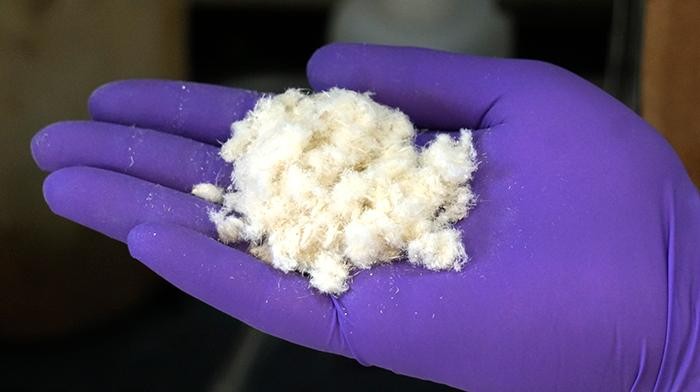 Every year the Canadian chicken industry produces more than 1 million tons of chicken for domestic consumption and export. With agencies like the US Department of Agriculture predicting that meat consumption will continue to increase this year, that level of production seems likely to remain stable for some time –– and with it comes a lot of feathers.

“Every year Canadian industry produces approximately 100,000 tons of poultry feathers,” Arshad explains. “Most of them are landfilled or burnt, but we could use them for a productive purpose.”

Poultry feathers consist of more than 90 percent keratin protein, which is made up of a variety of amino acids. Feathers gain their strength and stiffness because this protein is ‘crosslinked’, but by breaking those crosslinks in the lab it’s possible to create unravelled biopolymers with high surface area that can adsorb –– not absorb, but essentially stick to –– a variety of other particles, including heavy metals.

To effectively break the crosslinks, feathers must be washed, ground into a powder and washed again before being treated with modifying agents called dopants.

“When treated with the appropriate modifying agent, we can customize the keratin biopolymer to be specific in adsorbing particular contaminants,” Zahara elaborates.

Once the keratin biopolymer is ready, the process is straightforward: it is mixed into contaminated water and agitated. Within hours it interacts physically with the contaminants and adsorbs them. The cleansed water can then be separated and the sorbent disposed of, though as the team further investigates the strength of the bonds between the keratin biopolymers and the heavy metal contaminants, they may also find opportunities to separate the contaminants and recycle the sorbents.

This is a familiar decontamination procedure, but until chicken feathers entered the picture most available adsorbents were too expensive to use at a large scale. As a waste product from an existing industry, the poultry feathers promise to be lower cost –– especially because they can be customized for use against multiple types of contamination. 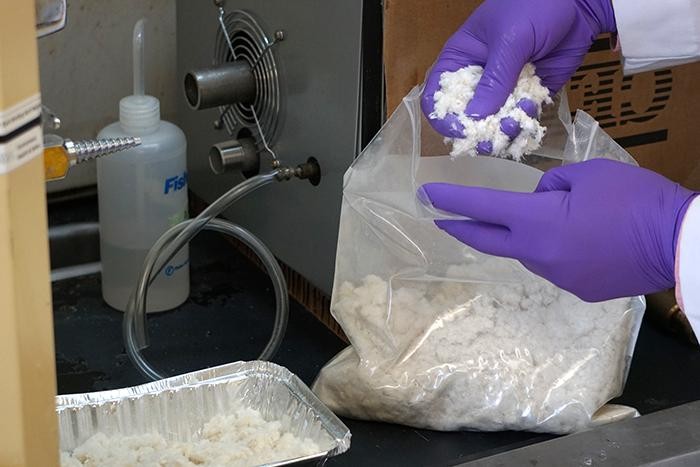 When Arshad started working on chicken feathers in 2014, the target contaminant was arsenic. Some 140 million people worldwide are exposed to groundwater that is heavily contaminated with that toxic element, and after completing his PhD in Chemistry at the University of Karachi, he joined Dr. Ullah, Dr. Siddique and their team in the University of Alberta’s Faculty of Agricultural, Life and Environmental Sciences (ALES) to take it on.

“Dr. Ullah won a Grand Challenges award for pioneering the idea of poultry feathers as a sorbent, and I was eager to be a part of his research,” Arshad says. “We needed solutions that were affordable and could be implemented at small as well as larger scales.”

The team’s progress was swift, and once they succeeded in developing a process that would use modified feathers to remove arsenic, they sought a new challenge. Alberta’s industrial wastewaters –– including tailings ponds –– were an obvious choice.

Arshad was optimistic: “We believed the keratin biopolymers could be used to address a serious environmental problem closer to home, and we were correct.”

Ullah’s team began customizing keratin biopolymers to collect a variety of heavy metal contaminants, and after some initial modifications and refinements the adsorbents can now remove more than 85 percent –– in some cases nearly 100 percent –– of these contaminants in the lab.

When Future Energy Systems launched at the end of 2016, Ullah and Siddique brought their teams into the program’s land and water theme. Their next steps will be to test keratin biopolymers on process-affected water collected from the field, then to further refine them to take on new contaminants from other energy sectors.

After studying the use of microorganisms to remove vinyl chloride gas in groundwater during her Masters in Germany, Zahara joined the team to help develop a greater understanding of how the life cycles of renewable energy technologies will impact water.

“If we develop cost-effective methods for decontaminating water before the new technologies are fully adopted, we can potentially prevent environmental and human impacts before there is ever a risk of them occurring,” she says.

Over the course of her PhD she will identify contaminants related to sources like solar and hydro, then optimize the keratin biopolymers to remove them. She has many years of work ahead, and she’s confident the effort will be worthwhile.

“Renewable energy can improve our environment, and by acknowledging and addressing potential water issues in advance, we can remove barriers to its adoption,” she concludes.

While Zahara continues to work on keratin biopolymers, Arshad’s time as a post-Doctoral fellow is coming to a close. He plans to remain in academia, taking the knowledge and experience he has developed working with chicken feathers to address other pressing environmental issues.

“Land and water reclamation will continue to be a vital area of research and education,” he affirms. “When it comes to our energy sector’s impact on the environment, we have much to learn, and much to change.”