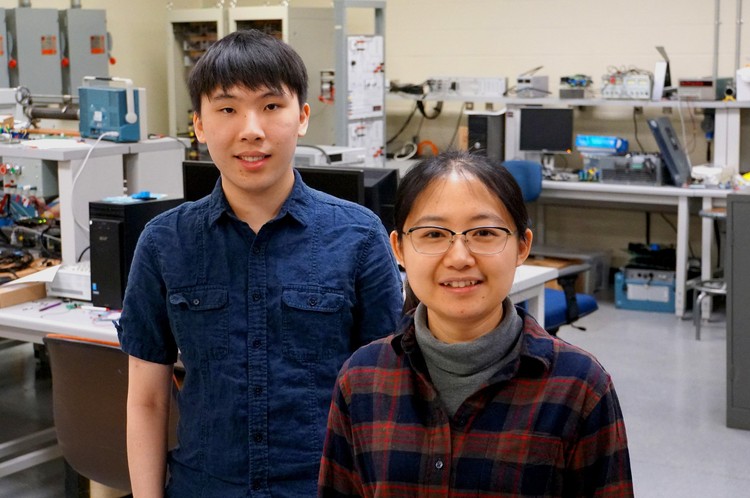 How can we make sure the electricity generated by wind farms is compatible, reliable and efficient?

We don’t know the wind quite as well as we think we do.

Though humans have relied on it for centuries to drive ships and mills, its use for utility-scale electrical generation only began in the 1970s. As today’s governments increasingly identify wind power as a key component of their renewable energy strategies, many questions still need to be understood.

Tong Shi and Andrew Zhou are HQP working with Principal Investigator Ryan Li on the Future Energy Systems project Wind Farm Operation and Grid Integration, and the knowledge they develop will prove essential when they graduate and go to work in the renewable energy sector.

The fundamental question they are addressing is simple: the wind doesn’t blow all the time or at the same speed, so as more wind farms join our energy system, how can we operate them with a high degree of reliability? To answer this question, they’re taking a look at the operation of both our power grid and the wind farms themselves.

Most of the world’s grids were built to deliver energy derived from fuels –– often hydrocarbons like coal and natural gas –– as well as nuclear power and hydroelectricity. These centralized sources offer a constant flow of energy, so the grids supporting them were never designed to cope with decentralized and inconsistent electricity.

Tong Shi worked on integrating renewable energy into conventional grids during her undergraduate and Master’s studies at the Harbin Institute of Technology. Though her focus was on solar, she finds similar challenges when working with wind –– beginning with a simple lack of experience in the sector.

”Some wind farms in the world have experienced a severe phenomenon called subsynchronous oscillations,” she explains.”There had been little research on this phenomenon in wind farms before the incidents happened, so when it occurred, the damage to equipment proved very costly.”

Understanding the basic causes of that sort damage means grappling with different types of electricity, and how they interact.

Though it’s easy to picture a wind turbine, visualizing the electricity it produces can be more difficult –– beginning with the century-old choice between AC and DC current.

Andrew Zhou lays out the basics: “Think of direct current –– DC –– like a steady stream of water from a hose. On the other hand, alternating current –– AC –– comes in sinusoidal waves that oscillate at a fixed frequency. Those aren’t exactly like the waves you’d see at a beach, but the idea is similar: AC electricity isn’t a constant stream but DC is.”

Both types of current are part of our daily lives: our power grid and all the outlets in our homes use AC but our phones charge with DC, which is why chargers come with converter boxes.

According to Zhou, problems develop when the frequency of a power source is out of sync with the frequency the AC grid. This means the AC power generated by variable wind speeds from turbines could be incompatible with the grid, unless they’re converted to match the grid’s fixed frequency.

“We already have the technology to make different currents compatible with each other,” Zhou confirms. “The challenge is developing and refining control systems that automatically know when and how to intervene, under a wide variety of circumstances.”

Unlike many other power plants, wind farms are often situated in rural areas or far out at sea –– where winds are stronger and more potential power is available. Getting that power to the grid isn’t simple: high voltage AC lines can shed a large amount of the electricity over long distances while high voltage direct current (HVDC) lines have significantly lower losses. However, when HVDC lines are connected to the grid, their current must be brought back to AC using a DC/AC converter –– without causing damaging oscillations or other unexpected phenomena.

Shi came to the University of Alberta to work on those challenges. A flexible control technology called STATCOM already exists, but few studies have examined how it can be used to manage the flow of electricity from inconsistent sources like wind farms.

“Flexible control technologies like STATCOM will enable us to develop control schemes that accommodate these renewable sources,” she says. “But in order to use them effectively we must understand how all components attached to the grid affect each other.”

Her work is taking a broad approach, considering the numerous potential issues that can result from the interfacing of multiple types of grid technologies. Though it means grappling with a vast and complex system full of unknowns, Shi is excited to be part of this research.

“I read many papers by Dr. Li during my studies in China,” she recalls. “When Future Energy Systems was launched, I applied to join his team and was accepted.”

Over the course of her four-year PhD program, Shi will use computer simulation and the recently-announced Future Smart Grid Technologies Lab to develop and test control schemes. She hopes these efforts will prepare her for work in the utility sector –– ideally in Canada.

“As more wind power joins the grid in Alberta it will be necessary to have people trained in the management of these control systems,” she points out. “I hope I can be a part of this move to renewable energy.”

Edmonton-born Andrew Zhou has a similar future in mind. At age 17 he came to the University of Alberta for his undergraduate studies knowing he liked math and science, then chose electrical engineering because it looked like a challenge. Upon graduation he decided to return for a two-year Master’s program, during which he’ll tackle a specific grid integration problem as part of this Future Energy Systems project.

"Our grid in Canada is AC and operates at 60 hertz,” he says. “That means the sinusoidal signal completes one full cycle in 0.167 seconds –– or put another way, there are 60 waves every second.”

The electrical current generated by turbines doesn’t always come at 60 hertz, so a ‘back-to-back’ converter is used to regulate its frequency, allowing it to safely integrate into the grid. But while the back-to-back converter is mature technology, the control systems that operate the switches within it aren’t yet able to keep up under all conditions.

“The control systems we have now can’t always keep up with voltage drops or grid-side faults,” Zhou elaborates. “When they can’t manage the disturbance, the entire wind farm can be automatically decoupled from the grid to avoid causing damage. Unless there’s a storage system in place, all that farm’s electricity is just lost.”

Zhou explains that new control strategies using digital signal processors will be necessary to do the rapid calculations that can keep those farms connected to the grid. Without improved systems, wind farms will continue to connect and disconnect depending on conditions, making their power less efficient and reliable.

“I have to develop new control systems and use simulations to test them,” he concludes. “And once I graduate, I plan to put those strategies to work in the renewable energy sector.”

Though wind farms have become familiar features on landscapes around the world –– including in southern Alberta –– the scale at which they may soon be built means unprecedented challenges lie ahead.

By empowering HQP to help solve these problems, Future Energy Systems will continue to contribute to the base of knowledge that enables renewable energy, and more importantly, will train the next generation of experts to refine and manage these systems both in Canada, and around the world.