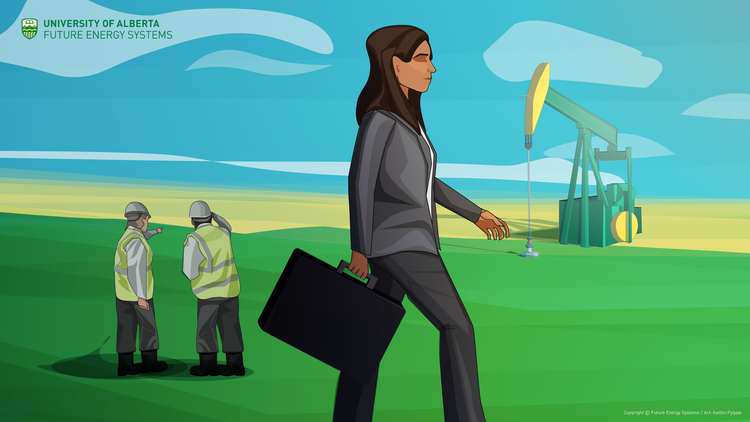 A historical perspective of a social phenomenon could help us understand the future of the oil and gas business in Alberta. (Art by Kaitlin Pylypa)

What drives the oil and gas sector, and what unifies it?

Like individuals in a society, separate companies in the oil and gas sector share common templates of thought and practice. These templates shape their decisions, their interactions with society, and their beliefs about themselves and the world. But these ideas can be hard to define, particularly for outside observers who rarely have the chance to understand their complexities, nuances, implications, or how they evolve over time.

Opinions run hot about why hydrocarbon extracting companies act as they do, but less time is spent empirically studying how these behaviours evolved. Understanding the sector’s framework of templates and the values, practices, and expectations shared by its members can go a long way to helping explain the energy system of today –– and how these systems will evolve in the near future.

Future Energy Systems graduate student Bandita Deka Kalita, a PhD candidate in the Alberta School of Business, is working under the direction of supervisor Joel Gehman to help develop this understanding. By looking at the history of Alberta’s oil and gas sector through the lens of organization and management theory, she is constructing an understanding of where the sector has come from, and where its future lies. 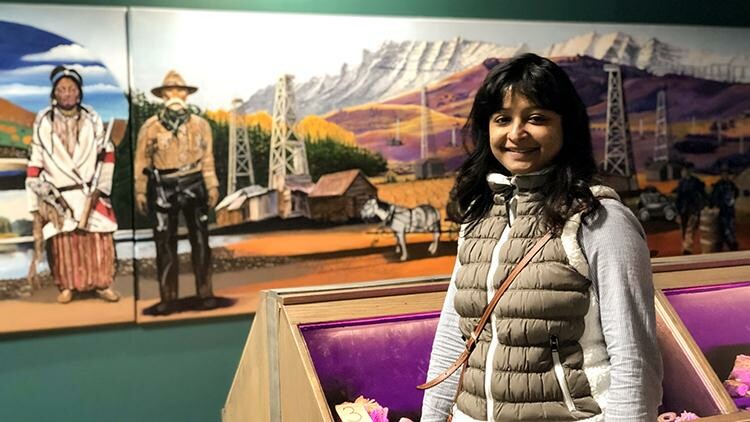 Bandita stands in front of a painting depicting the era of oil exploration at the Canadian Energy Museum in Devon, AB.

In the language of organization theory, organizations subscribe to particular ‘logics’ –– the ‘templates’ referred to earlier. Logics are a framework for understanding the world, a kind of governance system that guides an entity’s behaviours and choices in a unified way. The term broadly refers to overarching principles that prescribe appropriate behavior. In a ‘market’ logic, for example, profit maximization is an appropriate goal. Participants of a ‘community’ logic, on the other hand, value status and honor over wealth appropriation. The task of defining logics for organizations in any sector is challenging, and requires a great deal of work entailing detailed investigations into the practices of past and present organizations.

“We’re interested in how this sector of society is historically constituted, and how this constitution and resulting evolution might affect contemporary conceptions within it and ultimately cascade unto the decisions made within the sector,” Bandita explains. “To address that, I started by reading archival documents.”

Her work focuses on the years 1938 until 2019, meaning she was initially confronted with a veritable mountain of documents spanning the lifetimes of five different regulatory bodies for Alberta’s oil and gas sector. Her first step was to begin examining the logics held by the sector for different periods of time, but in the course of her data analysis, she realized that there were really only two logics at work: one encompassing the sector prior to 1995, and a second that came into existence since that year.

“In the first category, we see what’s called an extractive logic, focused on generating wealth from the extraction of natural resources. Its concern is mostly prosperity economics,” she elaborates. “In the second, recent category, it’s shifted to a greater concern for future generations, a more environmental lens. The question I’m interested in is how that change happens.”

To flesh out her understanding of these logics, Bandita needed to go beyond the documents and consult with the people involved.

“I’m speaking with executives in the industry, landowners with oil wells in their backyards, mediating agencies, provincial regulators, surface and farmers’ rights representatives, activists and environmentalists, academics,” she says. “It’s a snowballing technique –– you interview someone and you get your next lead from who you’re already talking to.”

Her research is ongoing, and because she continues to interview people with vested interests in the evolution of the sector, she is careful not to reveal preliminary findings that might bias future conversations. However, she offers an example that illustrates the evolution between the logics she has found so far. 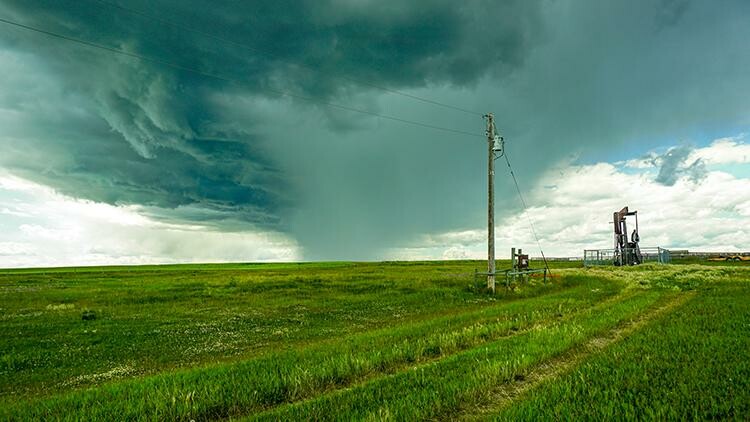 Abandoned oil wells are present throughout Alberta and deciding how to deal with them is becoming a matter of public discourse.

Oil and gas extraction has been operational in Alberta for many decades, and that has led to many long-term effects and outcomes. It was one of these impacts that first prompted Bandita’s supervisor, Joel Gehman, to start the work. He was interested in cataloguing all of Alberta’s abandoned oil wells, an unfortunate legacy of the past energy sector in Alberta.

“He began by quantifying how many wells had ever been drilled in Alberta, what their statuses were, how many were abandoned, and how many were remediated,” Bandita says.

When beginning her work under Joel’s supervision, she wondered why so many wells were abandoned –– and how, after years of neglect, the issue was now becoming one of apparent importance to the sector. Her understanding now suggests that the ‘extractive’ logic that existed prior to 1995 simply characterized abandoned wells as part of doing business, and placed little concern on their existence. Since 1995, the sector’s future-aware logic takes into account the environmental implications of these wells, and places greater emphasis on addressing them in some fashion.

Of course, the logics themselves do not define how specific actions might be taken, but Bandita believes that understanding them can help organizations and stakeholders overcome barriers and resistance to find meaningful solutions.

“Understanding each others’ past and present perspectives about oil-well abandonment and well-site reclamation decisions can give stakeholders a place to begin,” she says. “Instead of an adversarial conversation about what is right and what is wrong, we can have a discussion about what has already changed, and provide context for what changes can happen next.”

How they see themselves 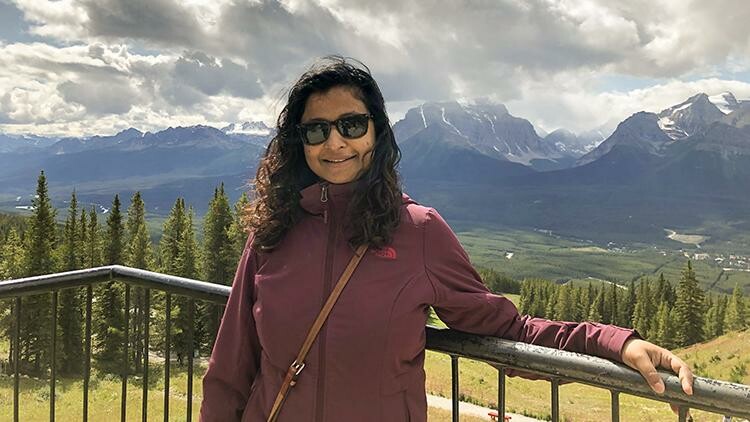 Exploring the oil and gas industry means Bandita is exploring many different regions in Alberta, including the Banff mountain scenery.

Bandita cautions that her research into logics is not meant to establish a subjective judgment about their relative ‘rightness’, but to unveil a holistic picture of how things in the oil and gas industry evolved and changed across the years.

“The entire process of logics transformation is both very organic and very socially constructed. It involves people and processes at all levels,” she explains. “With these kinds of studies, we try to probe deep into the meanings behind the data. The answers are not explicit; we decipher the meanings emerging from the rich data we collect via an analytical process involving constructing and reconstructing categories in an iterative manner –– this is the qualitative coding process”

Understanding these evolutions of meaning for the oil and gas sector will help us recognize the trajectory of our future energy systems, while also facilitating better collaboration around specific energy issues in the near future. But for Bandita, the energy context is only part of the appeal of the work. She ultimately seeks to use the examples she studies in this area to make contributions to the broader theoretical understandings of logics in organizational and management theory.

“Here we have a sector that has been responsible for a great deal of human technical and economic advancement for decades,” she explains. “Insights about the ways its logics evolved and changed in that time may be applicable for researchers studying new sectors that are now assuming positions of enormous power and influence in our society, like the social media giants.”

Equipping management scholars, policymakers, and interested observers with insights that can help them better understand how these massive entities conceive of themselves and their role in business and society is a goal she believes is worthwhile, and which inherently blends her personal research interests.

An engineer by undergraduate degree, Bandita worked first as a software engineer, writing code, before deciding to return to school for an MBA. She started her PhD in September 2018 with a mission to understand the intertwined relationship between institutions and organizations.

“I’ve always been a very theoretical person,” she laughs. “But as much as we want to make a contribution to the literature and the theories, it has to have some touchpoint with the real world.”

To learn more about this project, Moving Forward by Overcoming the Legacies of Past Energy Systems Projects, click here.

Have questions? Want to hear more? Bandita will be presenting at "Energy in a Flash", June 10 (7-8:30 MST), hosted by UAlberta Alumni. Register here to attend.