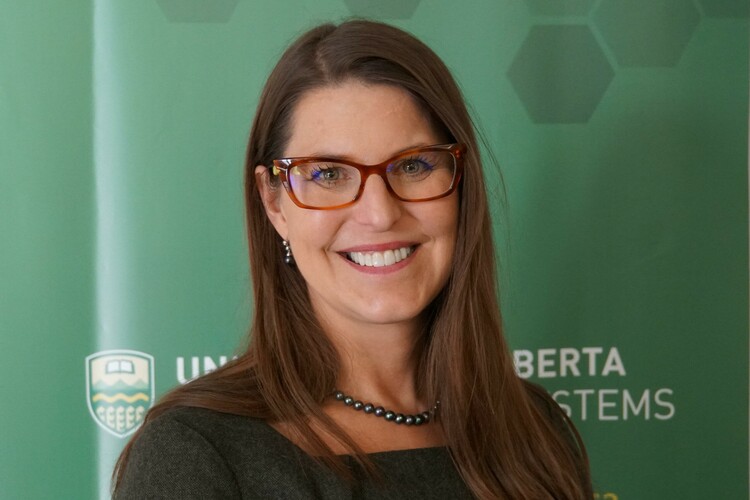 Engineering researcher Lianne Lefsrud led a U of A team that developed an AI-powered tool to analyze Twitter conversations about energy policy in Canada. (Photo: Kenneth Tam)

A new AI-powered social media tool is showing that Canadians aren’t as polarized about energy policy and transition as we might imagine.

Organized by category into a series of visualizations, the data illuminate how Canadians are thinking and talking about energy at the local and national levels — and how we can start to understand each other’s positions, Lefsrud says.

“There’s actually a striking amount of broad-based consensus around energy,” notes Lefsrud, who worked with U of A colleagues Eleni Stroulia and Denilson Barbosa in the Department of Computing Science and Joel Gehman in the Alberta School of Business to create the AI tool. “If we can begin to understand these conversations, how can we then help to build and develop solutions-based consensus policies with regard to greenhouse gas emissions, reduction and energy transformation?”

Canada is facing a number of challenges when it comes to energy policy discussions, particularly in terms of effective risk communication, explains Lefsrud, which is fundamental to the understanding and progression of fossil fuel and sustainable energy policy development. Projects have been stymied by the inability of policy makers to find common ground on these issues, hampered further by the erosion of public trust in government, business and media.

Traditional polls and other forms of public opinion sampling are “methodological and temporal artifacts” that don’t capture underlying data that may be far more illuminating and potentially more transformative, Lefsrud says. Ai4Buzz fills this gap.

“Pipelines are related to climate change, but they're also related to water, to hydraulic fracturing, to oilsands, to coal, and so on,” she explains. “It’s these interactions that allow us to start to understand the relationships between them. It’s not just a single question and a bunch of right answer categories. Ai4Buzz allows us to continue to understand evolving conversations. This is good news, because it allows us to think about our common ground and what we can do with it.”

Social media platforms are public venues where many of these conversations about issues of public interest take place. When Twitter made its API accessible to researchers, the team was able to “drink from the firehose” of all the tweets that mentioned their keywords.

And though some of the dialogue may be inflamed by influencers at both ends of the political spectrum, the Ai4Buzz research shows that most online conversations are far more nuanced and measured, linked by shared meaning and common values rather than the oppositional narrative hyped by popular media.

As Lefsrud explains, our positions toward energy policies in general don’t matter as much as the potential to have a “vibing” conversation, using a shared vocabulary of words that emotionally resonate with us.

“Twitter isn't a bubble,” she says. “It’s not just a simple microcosm of conversations that are not representative of the Canadian population. Yes, there are demographic differences across channels, but research also shows it can be seen as a signal, and if you can understand what's going on in these conversations, then you can see how it relates to and affects broader media conversations and broader individual and organizational behaviour. We're making those linkages.”

Lefsrud says the objective is to draw these narratives together to support policy conversations that aim for solutions. For instance, a policy maker could use Ai4Buzz to get instant feedback on an announcement or policy decision, rather than having to do a focus group or survey. Visualizations of the data may reveal values expressed over a period of time, such as “achievement,” “self-restraint” or “competence,” as well as the types of conversations people are having about the policy announcement relative to other conversations.

“It’s an unfolding experiment,” says Lefsrud. “Our primary goal is to generate buzz — make this data available to everyone, be super transparent in how we’ve analyzed it and then make it accessible and inclusive. We are taking feedback from our users about other visualizations they want to see. There's a real appetite for it. Let's have some positive, interesting and exciting conversations about energy.”

Ai4Buzz is supported by the U of A signature area AI4Society, the Kule Institute for Advanced Study, the Mitacs Accelerate Program, the Canadian Energy and Climate Nexus and ISAIC.