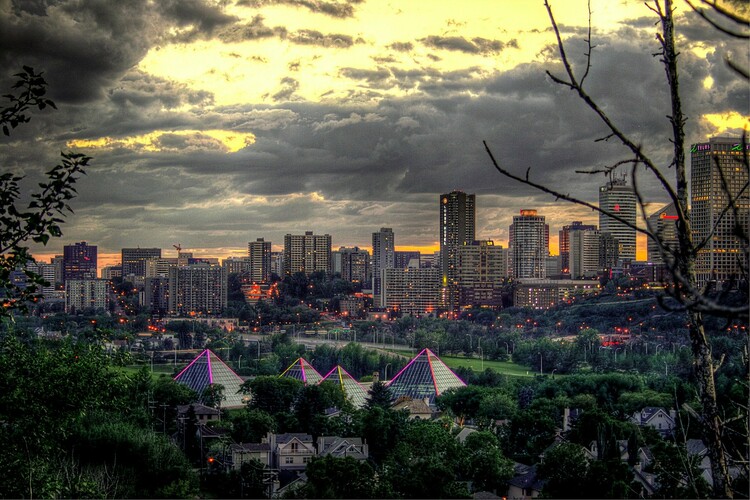 Neighbourhoods in Edmonton are united by community leagues, but not all are equal emitters of greenhouse gases

Neighbourhoods are where people live, work, play… and emit greenhouse gases. So why don’t we pay more attention to the role of individual neighbourhoods and communities in the energy transition? That’s the question that Future Energy Systems postdoctoral fellows Neelakshi Joshi and Nilusha Welegedara address with research at the intersection of urban planning and energy systems in Sandeep Agrawal’s lab - Urban Environment Observatory.

“It was a gap in the literature,” Neelakshi explains. “There was information about the role of countries and cities in the energy transition, but limited discussion on communities or neighbourhoods.”

Their supervisor, Sandeep Agrawal –– a Professor in the Department of Earth and Atmospheric Sciences and the inaugural Director of the University of Alberta’s School of Urban and Regional Planning  –– knew this gap in understanding would need to be addressed if responsible and thorough urban planning was to be accomplished for a net-zero emission future. He noted that the work done by his group is adding to the newly emerging thematic area - Energy Transition Planning - within the discipline of Planning.

“Cities are collections of communities, but they’re a metric that hasn’t been assessed yet,” he says. “Most of our living happens at the community level, so we need to understand emissions at that level.” 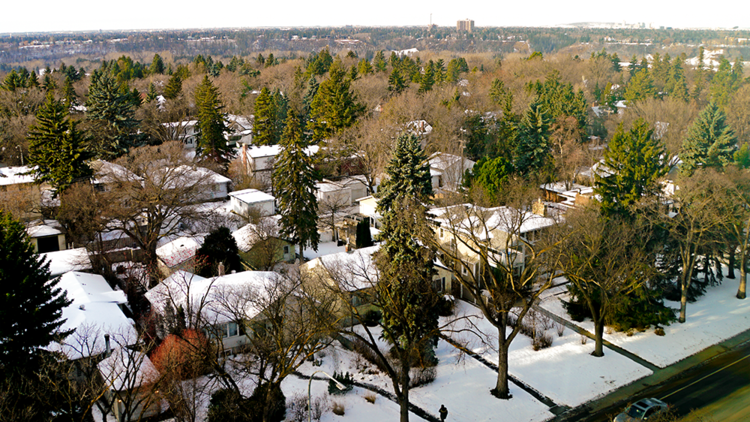 The cold climate and harsh winters of Edmonton are a major factor in driving greenhouse gas emissions in the city's neighbourhoods.

Releasing 20 tonnes of carbon dioxide equivalent per capita, Edmonton has the highest yearly carbon footprint in Canada. Some 63% of total energy use in the residential sector - and therefore emissions - comes from home heating –– an existential reality in North America’s northernmost metropolis, which routinely experiences temperatures below -30 degrees Celsius. To combat these emissions, the municipal government has set a goal to reduce emissions to 3 tonnes in 2030, and net zero in 2050. How can a credible strategy be built to meet this objective?

“It’s an ambitious goal,” Nilusha observes, “And to meet it, we need to be able to quantify how large our emissions are in individual neighbourhoods, and identify the main causes.”

Not all neighbourhoods are built the same, and neither are their greenhouse gas emissions. Nilusha began her analysis by leveraging a project begun by Research Assistant Shaival Gajjar, which helped identify the factors that would need to be included in a measurement of a neighbourhood’s emissions –– things like transportation methods, waste generation, green spaces and trees, emissions related to street lighting, and the type of residential or commercial buildings present.

Each of these factors could be further defined, she explains: “We looked at mature versus young trees, and the type of residential and commercial buildings, for example.”

Using a bottom-up approach, Nilusha built a model to calculate the gross and net greenhouse gas emissions per capita of Edmonton’s neighbourhoods, in terms of kilograms of carbon dioxide equivalent.

Different branches within the City of Edmonton provided some of the requested data Nilusha needed. While that served as a good foundation, she had to collect other data directly: “There are no records of the trees on people’s property. So we utilized World Imagery to survey the neighbourhoods.”

Nilusha tallied every single building and tree in twelve Edmonton neighbourhoods in four established categories –– core, established, mature, and developing –– with distinctive characteristics based on how the city grew over the last decades. 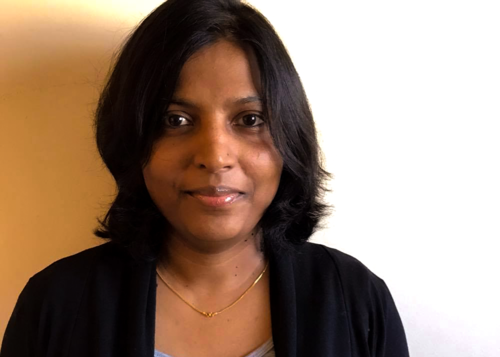 Calculating the specific emissions from energy use of each home would be nearly impossible, so Nilusha relied on a proven average. In 2015, Natural Resources Canada reported that the emissions in Alberta were 25.7 kg CO2e/m2 for semi-detached (including duplexes and row-housing), 28.7 kg CO2e/m2 for apartments, and 42.0 kg CO2e/m2 for single-detached houses.

“These differences come from factors like heat-loss,” Nilusha explains, “A single-detached home loses heat to all four sides, while attached houses might only have two sides exposed.”

By combining these figures with her assessment of the types of residential buildings predominant in each neighbourhood, Nilusha began to identify significant differences in the average emissions in each neighbourhood type. “Floor area per person is a major influence in determining greenhouse gas emissions,” she adds. In her work, she found that larger-sized residential units are more common in developing neighbourhoods. “So that was another significant factor to include in our modelling.”

However, neighbourhood emissions were also strongly influenced by the types of transportation used by the residents of the neighbourhood. For example, in the Edmonton communities Nilusha examined, proximity to the Light Rail Transit (LRT) was linked to reduced personal vehicle transit.

“We need to plan for better connectivity if we want to support adoption of lower-emission transportation,” she says. “Otherwise, we won’t see reductions in this area.”

As cities continue to grow, quantifying emissions at this neighbourhood scale can help municipalities find ways to reduce emissions.

“We can quantify better configurations for neighbourhoods,” Nilusha affirms, “and develop programs and policies that support city emissions goals, practically and effectively.”

But once these configurations are better understood, how can municipalities effectively implement them? Neelakshi is investigating whether actions at a neighbourhood level might be more impactful. 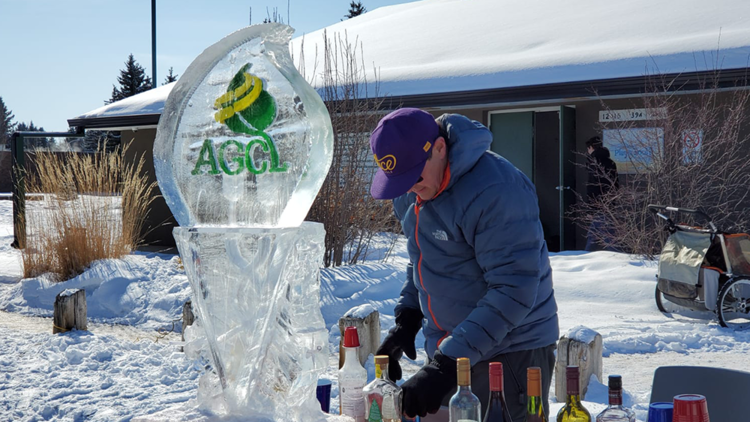 Communities in Edmonton are often united by community leagues, which organize events and initiatives for the residents of their community.

Just as different neighbourhood communities have different emissions, they can have different approaches to climate action –– some which are far more ambitious than what city governments recommend.

Neelakshi found Edmonton to be an interesting case study for this emerging trend, as many of the city’s residential areas are organized into community leagues, a type of neighbourhood council that provides activities, fundraising, common codes of conduct, and advocacy to the municipal government.

“These leagues are established, trusted, and embedded in their communities,” she explains. “Those are advantages that many climate-conscious grassroots movements don’t enjoy.”

Neelakshi reached out to the Green Leagues program at the Edmonton Federation of Community Leagues (EFCL) to identify communities that were leading their own independent sustainability programs, and ultimately found ten whose sustainability initiatives she could study.

“The EFCL has been in operation for almost a hundred years, so we can consider the leagues an established organization, with a solid structure,” she says. But longevity doesn’t remove all the challenges facing leagues that get involved in the energy transition: “Community leagues generally are not known for their association with sustainability. They must overcome the expectations of members who have known them for other things.” 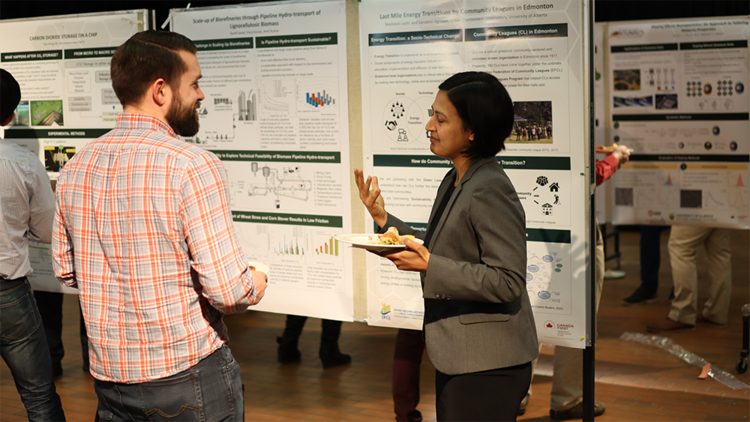 Dr. Neelakshi Joshi shares her work at a conference.

As Neelakshi began reaching out to the leagues, she found that the trend towards leagues ‘turning green’ was relatively new, with new positions like ‘sustainability manager’ beginning to appear after 2016. Staffing these positions became the first challenge: community leagues are generally composed of volunteers with limited time, jobs, and families.

After speaking to all ten of the sustainability managers, Neelakshi realized the difficulty the role was for many individuals: “After doing this job for years, people can become burnt out. It’s a lot of effort to take on this challenge.”

However, the hard work paid off: many leagues were powering their facilities with renewable energy, conducting energy retrofits, and initiating programs like community gardens.

How are community members responding to the progress? Neelakshi has organized an online survey in the ten communities, and the initial results have been sobering: there existed a broad awareness of community league sustainability initiatives, but that awareness didn’t necessarily sway residents into changing their individual energy practices.

“People are interested in hearing about what the leagues are doing, so they definitely play a role in raising awareness,” she says. “But I thought leagues might be this magic key –– that when the community takes up a flag and people would follow. It is clearly more complicated than that.”

The surveys are still open to respondents, so Neelakshi says it would be premature to draw further conclusions. However, it is clear that community efforts to battle climate change are complex –– part of a broader strategy that must function on multiple levels.

Bringing people and planning together 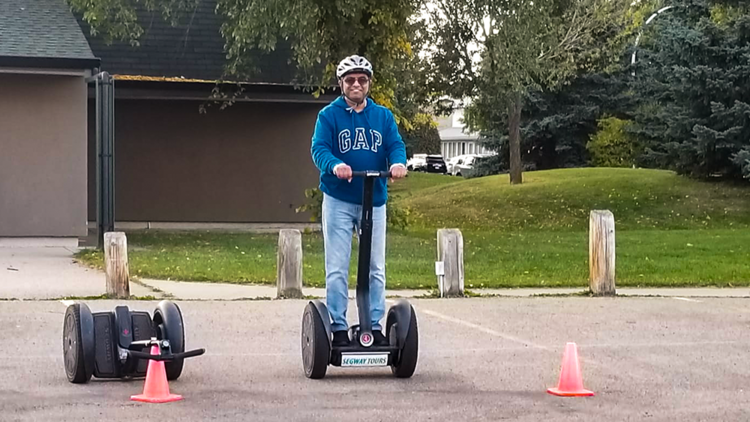 Neighbourhoods are where we live, work, and play - but they can also be powerful tools in a strategy for combatting climate change and planning for the energy transition

Looking at communities and neighborhoods provides a more nuanced and sophisticated understanding of a city’s emissions and climate change actions, and it confirms simple, important truths.

“If the residents of the city don’t buy into a policy then nothing changes,” Neelakshi says. Neighbourhood associations can mobilize to encourage participation, but they can ultimately only lead by example –– it is up to resident to decide whether to join in.

Nilusha believes that awareness might be a problem: “Residents might not realize how much their individual actions contribute to greenhouse gas emissions, or the things that you can change to reduce emissions.”

Demonstrating how different neighbourhood planning strategies and decisions affect emissions and working with the established leagues in their communities to encourage action  are two avenues with the potential to make a real impact on municipal emissions. But even these distinct strategies represent only part of the picture.

Sandeep doesn’t believe planning for the energy transition can be treated as a one-step process. Governments play an important role, but the actions of individuals are just as important.

“We can look at it like two ends of the spectrum: bottom-up and top-down,” Sandeep explains. Governments and municipalities can make policy and plans, and neighbourhoods and individuals can take action, but the efforts will be most impactful when they are all moving in the same direction.

“Every one of us, and our neighbourhoods, have a role to play in the battle against climate change,” he concludes. “And it encourages –– with advocacy, engagement and research –– the policies and policymakers that can make a difference.”

Learn more about this research by clicking here!