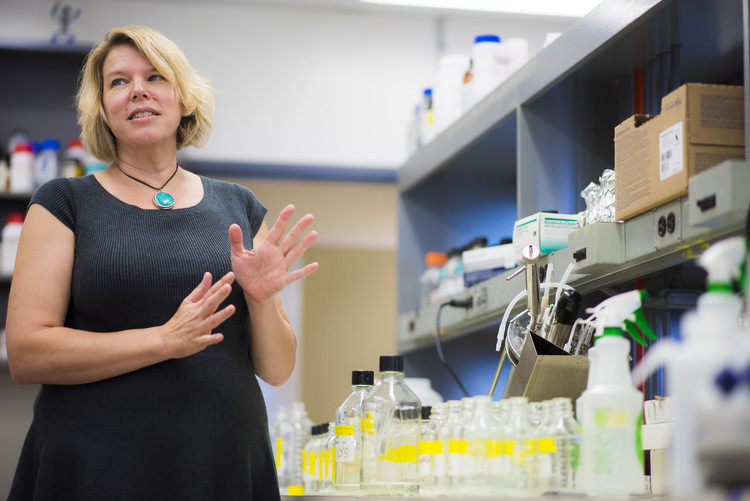 Microbiologist Lisa Stein is developing a bacteria with the potential to close the loop on Alberta's legacy energy system. Photo credit: John Ulan.

UAlberta microbiologists are developing bacteria that will create useful biofuels from oil and gas production waste products, such as methane.

Lisa Stein, a professor in the Department of Biological Sciences, is working in conjunction with researchers in the faculties of Engineering and Agricultural, Life & Environmental Sciences to develop a small-but-mighty bioreactor that will capture waste methane emissions and convert them into something useful.

“Essentially, we take single carbon molecules and create complex organic materials, thereby adding a lot of value to these waste products,” said Stein. “Combining that waste methane with our bacteria, we can create biofuels, like biodiesel and isoprene.”

Smokestack flares are the result of “fugitive” methane emissions—when there is not enough methane produced to become something useful but too much to release into the atmosphere without consequence. These emissions occur in many industries, ranging from water treatment plants to paper mills to oil and gas refineries. The proposed bioreactor will have the capacity to make this fugitive methane useful.

"Instead of just releasing these products into the atmosphere or flaring them off as carbon dioxide, we make them into something useful, using existing systems and technologies.” —Lisa Stein

Stein’s bacteria combined with this technology will effectively close the loop in our legacy energy system. “Instead of just releasing these products into the atmosphere or flaring them off as carbon dioxide, we make them into something useful, using existing systems and technologies,” she explained.

Stein’s research is powered by funding from Future Energy Systems.