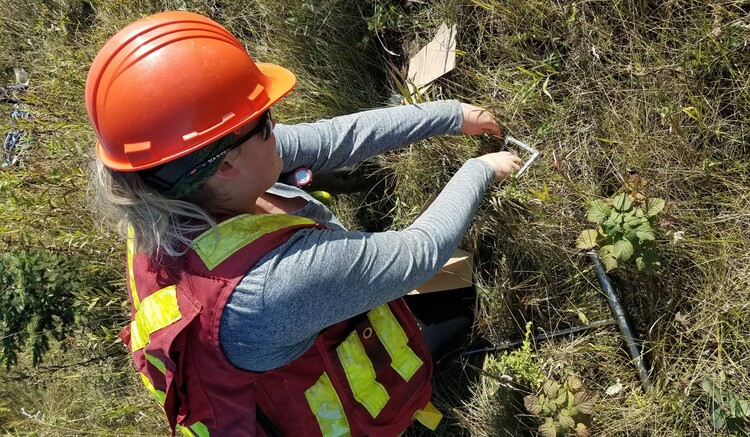 Tiny soil dwellers may offer a fuller picture of how well reclamation efforts are working.

The tiny creatures teeming in the dirt under our feet don’t seem important, but University of Alberta research is starting to unearth ways some of them could help measure land reclamation efforts.

Invertebrates such as worms, mites, centipedes and beetles affect the soil, but they aren’t included in current criteria that help mining, forestry, oil and gas and other resource industries meet regulatory standards for reclaiming land they’ve used.

“Right now we look at the health of soil and vegetation as indicators, but they may not provide enough of a detailed picture of recovery after disturbance,” said researcher Stephanie Chute-Ibsen.

Adding some of the creepy-crawlies into the equation would likely strengthen reclaimed sites, but with “more living things in a few tablespoons of soil than humans living on the planet,” figuring out which ones to include in the criteria is a “massive job,” Chute-Ibsen added.

“There are many hurdles to including them easily; there’s either really specialized or not enough information, and we’re trying to bridge that gap.”

After two years of collecting and analyzing certain mites, bugs and the soil in which they live, the PhD candidate in the Faculty of Agricultural, Life & Environmental Sciences has helped narrow the field.

Their preliminary findings could eventually help build a toolkit of dirt-dwelling creatures that contribute to a fuller picture of successful site reclamation.

The particular bugs and mites Chute-Ibsen studied are sensitive to changes in their environment, making them good indicators for showing whether a reclaimed ecosystem is functioning well or not.

“If you change the moisture or pH levels in the soil, or the food source isn’t right, they’ll either leave the area or, if they are less mobile, they could die.”

That information allows for more sensitive measurement of how a reclaimed piece of land is functioning and creates confidence in the long-term success of reclamation projects, Chute-Ibsen noted.

That is especially important in the face of complicating factors like climate change, they added.

“We want reclamation that is able to stand the test of time, that can be exposed to environmental stressors like flood, drought or fire, and still be resilient.”

Chute-Ibsen identified two types of potential indicator species: oribatid mites and six-legged, spring-tailed specimens called collembolans. Both species have types of behaviour that are consistent no matter the weather or time of year. “It makes them promising candidates for reclamation criteria.”

The next step is to determine whether and how the two species could be worked into the reclamation measurement process while balancing factors like time and cost.

Adding soil invertebrates to the measurement process would give resource industries an added measure of confidence in their reclamation work, Chute-Ibsen believes.

“If, say, contaminant levels are too high in soil used for reclamation, these organisms can tell you sooner than other indicators. That allows industry to mitigate a problem before it becomes site-wide.”

Chute-Ibsen hopes the work will also shed light on how land disturbance affects the creatures that help keep soil healthy, including on reclaimed land.

“They create pockets by moving through compacted soil that’s put back onto a reclamation site, for example. All of their activity directly influences the higher-ups; they create the environment for plants and by extension, wildlife, to thrive.”

Chute-Ibsen said the work also adds insight to a research field with plenty of room for more exploration, with studies estimating more than 70 per cent of soil mites remain undiscovered.

“People think space is the final frontier, but there’s a whole world under our feet that is one of the last remaining unknowns.”

Chute-Ibsen’s work is funded by the Canada First Research Excellence Fund through Future Energy Systems, a research and teaching network at the U of A working to develop innovations for energy transition. The research is also supported by Capital Power, and in-kind support was provided by the Royal Alberta Museum.